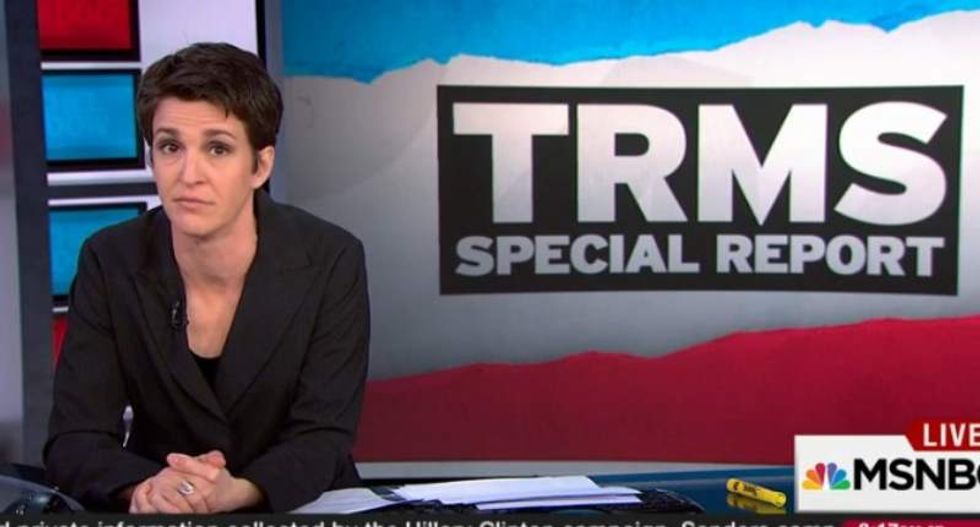 "The kids of Flint, Michigan have been poisoned by a policy decision, all at once," she told the governor. "The town has been poisoned under your watch, governor, through the actions and inactions of people who report to you and the people who you appointed."

The city declared a state of emergency earlier this week as a result of extensive lead contamination in the local water supply, which has been drawn from the Flint River since April 2014.

The switch to using the river instead of Lake Huron, Maddow explained, was approved by a manager appointed by Snyder. So was the decision to sell a pipeline that could have given Flint an "escape hatch" once signs began to emerge about the contamination issue.

The state Department of Environmental Quality, which also reports only to Snyder, dismissed findings from both a visiting Virginia Tech researcher and a whistleblower from the Environmental Protection Agency regarding the increasing danger posed by the contaminated river water, which has a higher concentration of lead than the supply originating from Lake Huron.

Maddow speculated that one reason the story has failed to attract national attention was the belief that the lead issue was the result of a long-term infrastructure breakdown, a theory she rejected.

But despite the situation being described as a "manmade disaster" by Mayor Karen Weaver, Maddow said, Snyder's administration is still reluctant to identify the water as the issue. She played a clip of the governor telling Detroit Public Television, "Let's get the facts, let's keep working this and let's remember, water isn't the only source of lead."

But the situation, Maddow argued, is the product of the state law she said allowed Snyder to essentially bypass democracy and allow people loyal to him to rule "by fiat."

"Now we're getting in the first results of what they have done," she said. "I did not expect those would have to be blood test results from kids, but that's what they are. That's what Rick Snyder did."

Watch Maddow's commentary, as aired on Friday, below.

Records reviewed by the network show Walker benefited from Texas' homestead tax exemption, shaving approximately $1,200 off his 2021 tax bill on his $3 million home in the Dallas-Ft. Worth suburb of Westlake. The Texas Tribune reports the former NFL star is expected to apply for the discount again this year, and would likely save about $1,500.

Reacting to the report, incumbent Democratic Sen. Raphael Warnock—who will face Walker in a December 6 runoff after neither candidate received 50% of the vote in this month's midterm election—asked on Twitter, "How can Herschel Walker represent Georgians when he doesn't even claim our great state as his primary residence?"