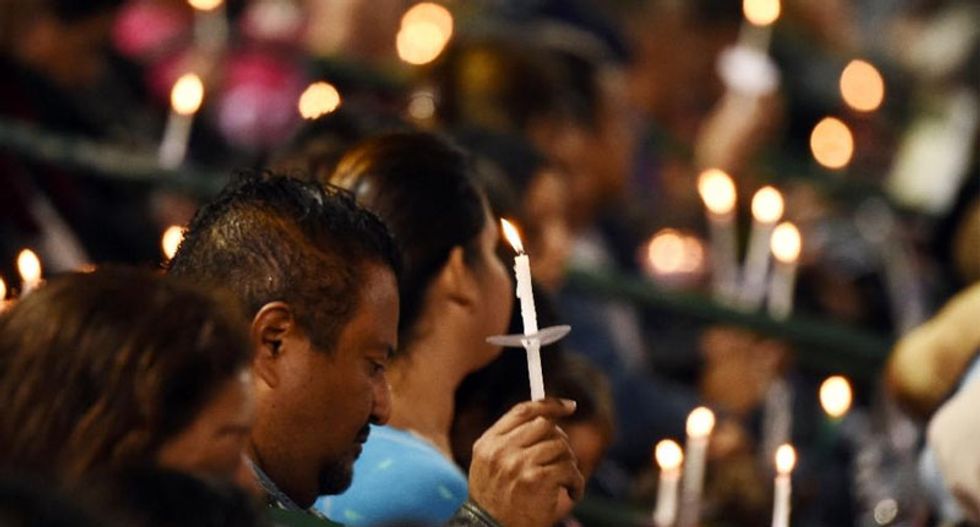 A US-born Muslim who along with his wife gunned down 14 people in California may have been radicalized and had been in contact with known terrorism suspects, news reports say.

The FBI, which has cautioned it was too early to link the attack to terrorism, has taken charge of the investigation into Wednesday's mass shooting in San Bernardino.

Agents were combing through evidence to determine what prompted Syed Farook, 28, and his 27-year-old Pakistani wife Tashfeen Malik to carry out the rampage that also left 21 people wounded.

Law enforcement officials quoted by The New York Times Thursday night said the FBI was treating the shooting as a potential terror act, but the agency was far from concluding it was and the motive remains unclear.

CNN, quoting officials, said Farook had been in contact with known terror suspects overseas and had become radicalized after marrying Malik in Saudi Arabia last year, although an imam at a local mosque he attended said Farook showed no signs of that.

The FBI -- who were scouring cell phones and a computer hard drive of the couple -- had evidence that Farook had communicated with extremists domestically and abroad a few years ago, the Times said, citing congressional officials briefed on the investigation.

Quoting a senior federal government official, the Los Angeles Times said Farook was in contact with a small number of suspected extremists. This official was also quoted as saying there are indications he communicated with at least one person being monitored as a potential terror suspect.

Farook's connection to that person may only be tangential, the source said, but the link suggests there may be a "deeper terror matrix" behind the California shootings, the official said.

Up to 3,000 people attended a vigil Thursday evening in honor of the victims, lighting candles and listening to memorial speeches.

President Barack Obama, who ordered flags to be flown at half-staff until Monday, said a terror attack could not be ruled out but also cautioned against jumping to conclusions.

"At this stage, we do not yet know why the terrible event occurred," said Obama, who has repeatedly called on the Republican-controlled Congress to pass tougher gun control measures, after a string of mass shootings across the United States in recent years.

The attack was the deadliest mass shooting in the United States since the 2012 assault on an elementary school in Connecticut that left 26 people dead, including 20 children.

Some of the reasons pushing authorities to believe Wednesday's shooting may be terror-related included the astonishing arsenal the couple had amassed, their foreign travels, and the fact that they appeared to have meticulously planned the attack.

"There was obviously a mission here," David Bowdich, the assistant FBI director in charge of the Los Angeles office said, in the wake of the killings at a holiday party for county employees at a social services center.

"We don't know if this was the intended target or if there was something that triggered him to do this immediately."

San Bernardino police chief Jarrod Burguan said Farook and his wife -- who dropped off their six-month-old daughter with Farook's mother shortly beforehand -- fired about 150 bullets inside the Inland Regional Center and during a subsequent shootout with police that left both dead, after a huge manhunt.

He said investigators had found an additional 5,000 rounds of ammunition at the couple's home along with 12 pipe bombs and bomb-making material.

"Nobody just gets upset at a party, goes home and puts together that kind of elaborate scheme," Burguan said, referring to indications that Farook had attended the party and left following a dispute, only to return a short time later with Malik.

The duo were dressed in black military-style gear and carried assault weapons and semi-automatic handguns when they raided the party where about 80 people had gathered shortly before lunchtime.

Authorities identified the victims as six women and eight men ranging in age from 26 to 60. All but two were county employees and colleagues of Farook, who worked as an environmental inspector for the health department.

"This is a tragedy but we must show that we are not afraid," said Dorothy Andrews, 74, who joined several thousand people who turned out at the city's San Manuel Stadium.

Acquaintances told AFP that Farook did not seem to have extremist views and was living "the American dream" with his wife and baby daughter.

"He was married, he had a daughter and last year he made $77,000," said Gasser Shehata, 42, who attended the same mosque as Farook. "He had everything to be happy."

According to the site Mass Shooting Tracker, the latest attack brings to 352 the number of mass shootings in the United States so far this year. A mass shooting is defined as four or more people shot in one incident.