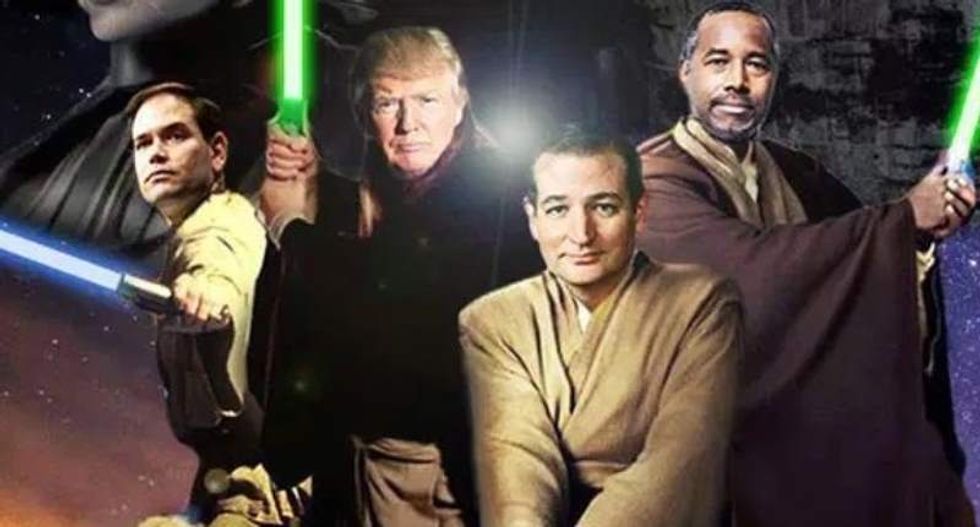 Anyone who ever saw Mitt Romney try to sing "Who Let The Dogs Out" can tell you that Republicans have endured some clumsy moments when trying to capture the zeitgeist. This year was no exception.

The most recent example surfaced earlier this week, when a meme circulated online painting presidential candidates Sen. Marco Rubio (R-FL), Sen. Ted Cruz (R-TX), Donald Trump, and Ben Carson as members of the Jedi order, just in time for the release of the latest Star Wars film. President Barack Obama, naturally, was depicted as the Emperor, flanked by Hillary Clinton as Darth Vader, as seen below: 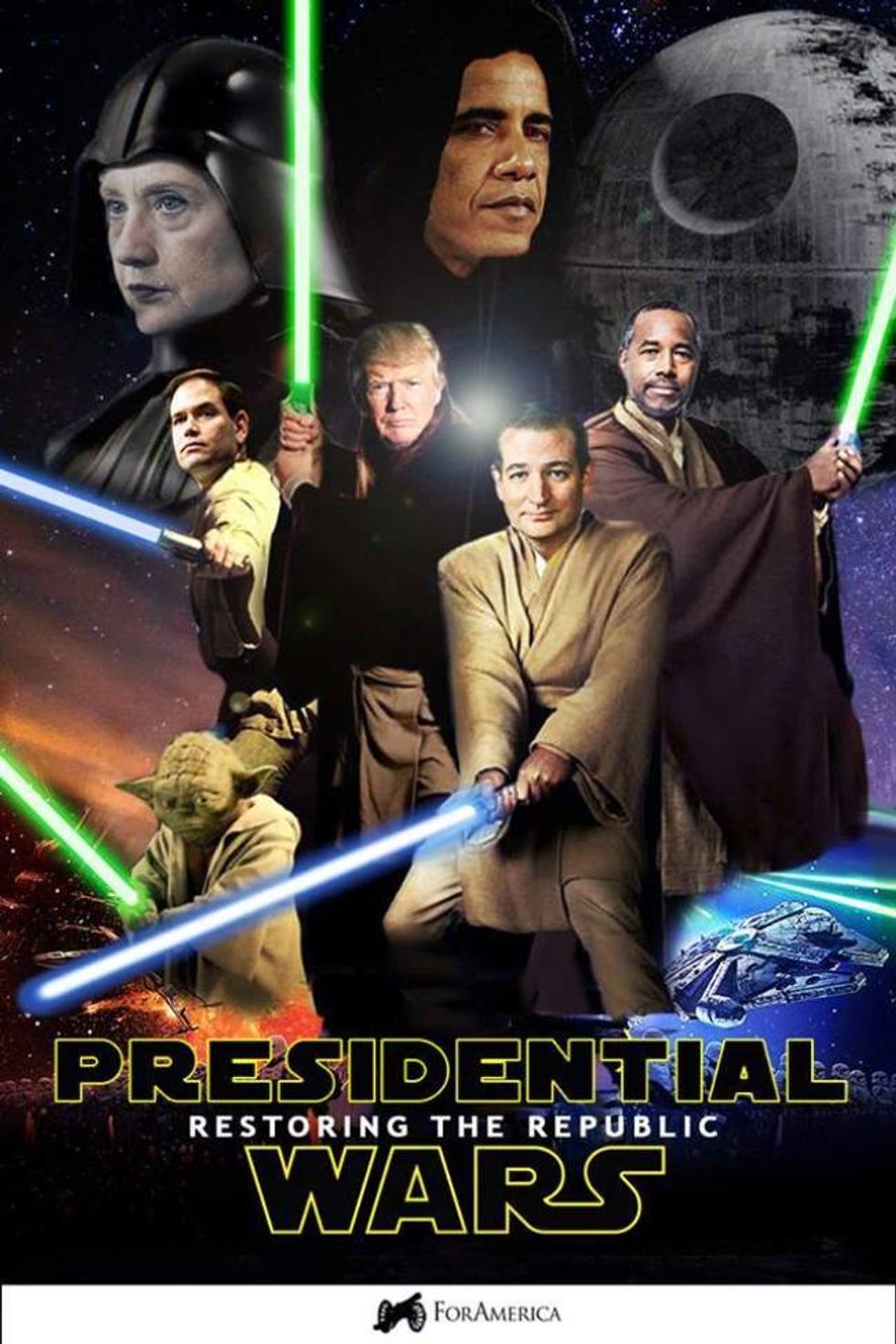 It is unclear whether any candidate was originally slated to "portray" Yoda. But with that canon-scarring image still in mind, here are five more instances this year when conservatives tried to portray themselves as "hip," with uneven results.

Trevor Noah's Daily Show took that opportunity to ask viewers to post their own takes on the material, resulting in the tag #CruzYourOwnAdventure taking off.

One standout clip, "Cruz Fiction," shows the world a mashup between the Texas Tea Party favorite and Quentin Tarantino that now seems oddly inevitable, as seen below.

2. Jeb Bush and the hoodie

Former Florida Gov. Jeb Bush (R) has been hounded by Trump throughout the campaign for being "low-energy." But contrary to the real estate magnate's accusations, Bush has shown energy in some moments. Unfortunately for him, those moments were painfully captured on video and released by his campaign, as Bush can be seen struggling to put a hooded sweater on over his head.

"Eat your heart out, [Mark] Zuckerberg," Bush tells the Facebook head. It's doubtful Zuckerberg has much to be afraid of, however, given that he probably realizes that "hoodies" tend to have a zipper in the front.

Before being turned into a Jedi, Rubio spent some time earlier this year reminding people that he is a hip-hop fan. The Tea Party senator, who has described rappers as being like reporters in the past, stated his allegiance to West Coast artists like Tupac Shakur and Dr. Dre.

He also shared his excitement online over the release of Straight Outta Compton, the filmed account of the early days of the gangsta-rap group NWA. But as Slate's Ben Mathis-Lilley noted, his fanfare for the group doesn't jibe with Rubio's pride at being raised in "Ronald Reagan's America":

The members of NWA were also born and raised in Ronald Reagan's America. Reagan was the governor of California when they were children and the president when they were teenagers and young men. For them, Reagan's America was not a good one. More than any other American leader, Reagan was responsible for popularizing resentment of welfare recipients and creating the modern war on drugs. As president, he treated poor black people as threats to be governed with force. And whether or not you think Reagan's actions were justifiable, it's impossible to deny that they are exactly what NWA was angry about.

Perhaps more disappointingly, Rubio also says he likes the Wu-Tang Clan, yet can't ever seem to identify any members of that group.

Despite being the Republican front-runner, Trump has failed to score much support when it comes to campaign theme songs. From the outset, Neil Young criticized the mogul when he used "Rockin' In The Free World" to announce his campaign, reaffirming his support for Sen. Bernie Sanders (I-VT) in the process.

In September, Trump tried to use R.E.M's "It’s The End Of The World As We Know It (And I Feel Fine)" to express his criticism of a US-Iran nuclear agreement, only to be called an "orange clown" and denounced by the band.

Trump found a brief moment of musical respite when Twisted Sister granted him the use of their hit "We're Not Gonna Take It" that same month. But even frontman Dee Snyder -- no stranger to controversy himself -- felt Trump and his campaign had gone too far, and revoked the band's permission this month.

"When you have white supremacy groups aligning with you, and you don’t denounce them, you don't say, 'Wait a minute, I'm not with these people here,' and draw some clarity, that's a problem for me," Snyder said in a radio interview.

5. Trump shows up on Saturday Night Live and nearly leaves it for dead

Trump's anti-immigrant rhetoric -- as opposed to his anti-Muslim rhetoric -- was fresh in the public's mind when he was announced as a guest host for SNL, bringing protesters out to campaign against NBC, and spurring the offer of a $5,000 "bounty" for anyone who would call him a racist on the air. The money was collected by comedian Larry David, who said it as part of the monologue, rather than an authentic protest.

But Trump's lasting damage may have been to the show itself, which was pilloried in the press for featuring "anemic" sketches with the candidate, including one about his hair that was apparently so bad it did not even air.

How bad was the episode? The AV Club called it the show's "nadir," while the team at Cracked magazine called it simply "dogsh*t," as seen below.