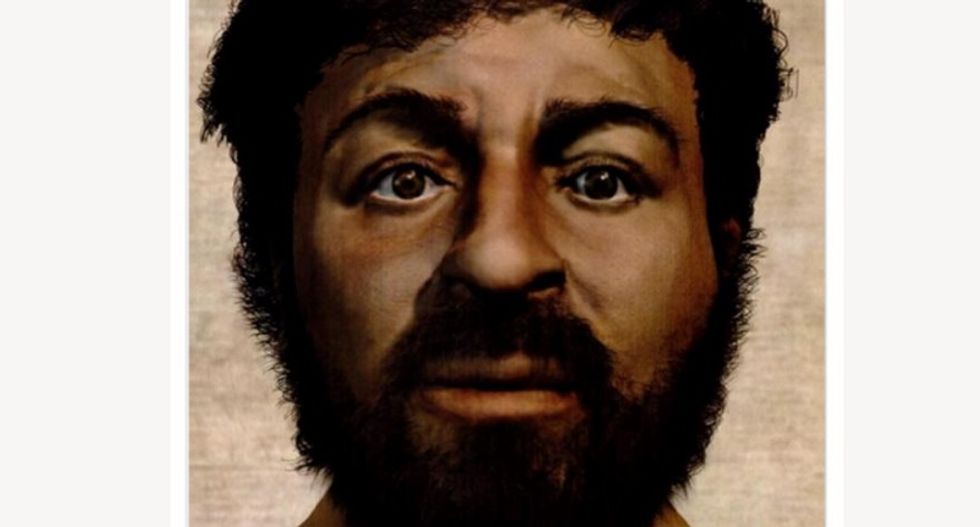 Images of what artists have imagined Jesus to look like are prolific. Most of them, in contemporary Western societies, depict a brown or blond-haired, blue-eyed, bearded man with a doe-like facial expression.

But given the time and place of his life, it's unlikely he looked like that. He was a Middle Eastern Jewish man from the region of Gallilee, which borders modern-day Lebanon and Syria. The clues in the Bible about his appearance are subtle, but they are there, and what they say is that Jesus was a very typical-looking Gallileean Semite, according to Popular Mechanics.

Richard Neave, a retired medical artist, used science to make the best possible guess at what the founding figure of the Christian religion looked like. Unlike images that depict a Caucasian with flowing hair, Jesus probably had a dark complexion, dark eyes and dark, curly hair.

The Popular Mechanics article was published in January but is being widely shared today, according to AL.com. In ten days, Christians will celebrate Christmas, the holiday symbolizing his birth.

The biggest clue for Jesus' actual physical appearance is in the Gospel book of Matthew. Before being crucified, Jesus was in the garden of Gethsemane with his disciples. He was so average-looking for a man from his area and ethnic background, that Judas had to single him out from the others, because the Roman soldiers couldn't distinguish which one he was.

Using techniques from a discipline called forensic anthropology -- normally used to solve crimes. Neave, co-author of Making Faces: Using Forensic And Archaeological Evidence, used evidence like skulls from the time and place that Jesus lived. They then used computer technology to determine how tissue and muscle would have made his facial features look.

They then created a cast of the skull and layered clay on using measurements from the computer data. Drawings and historical data from Jesus' time period also resolved issues that couldn't be determined from skeletal remains, including hair and eye color, and physical build. Drawings of local people from certain archaeological sites point to dark hair and dark eyes. In keeping with cultural customs, Jesus would have worn a beard.

Using another subtle clue from the Bible, the researchers determined Jesus hair would have been kept short, as opposed to the flowing waves often depicted in religious imagery. In Corinthians, the apostle Paul writes that long hair on a man is a disgrace. Paul wouldn't have written this, the researchers deduced, if Jesus had long hair.

Using historical data, they also pegged his height at about 5'1" -- the average, and weight at about 110. He was a carpenter by trade, meaning he worked outdoors. The weather exposure may have resulted in an older appearance.

But Neave points out it's impossible to know for certain what Jesus looked like, because there are no drawings of him and no direct physical descriptions. His recreation is simply a portrait of a typical man from Jesus' time, place and culture.

"The fact that he probably looked a great deal more like a darker-skinned Semite than westerners are used to seeing him pictured is a reminder of his universality," Charles D. Hackett, director of Episcopal studies at the Candler School of Theology in Atlanta, told Popular Mechanics. "And [it is] a reminder of our tendency to sinfully appropriate him in the service of our cultural values."