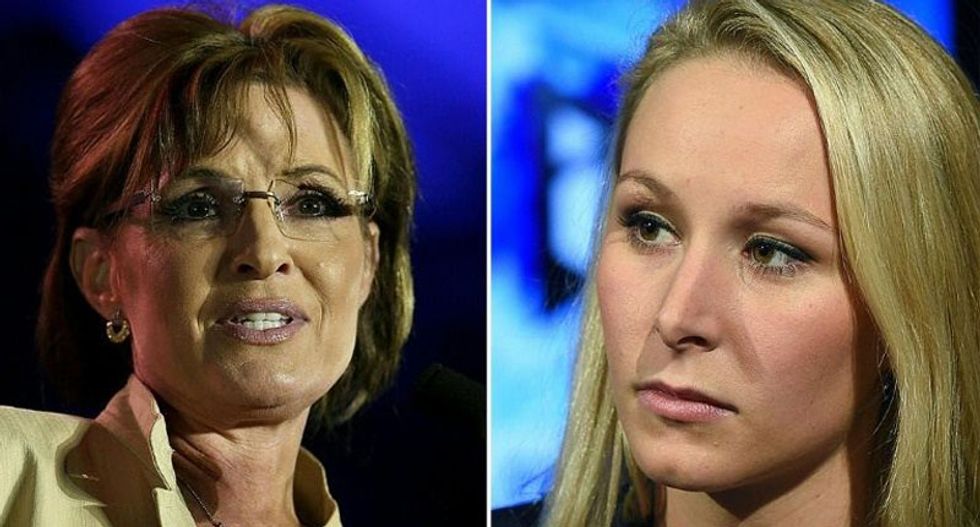 Sarah Palin has confessed to having a "political crush" on far right French politician Marion Marechal-Le Pen, whom she likened to Joan of Arc.

The former Republican vice presidential candidate heaped praise on the young National Front deputy Sunday as her anti-immigrant party went down in defeat in the second round of regional elections in France, after dominating in the first round.

"I have a political crush, but one I couldn't vote for today ?- because she ran for office in France," Palin wrote in the conservative Breitbart news website.

Marechal-LePen is a granddaughter of NF founder Jean-Marie Le Pen, and latest generation of the political family to make its mark on France.

She became the youngest lawmaker in modern French history in 2012 when she was elected to the National Assembly at age 22.

"As Marion faces the political battles ahead, I wouldn't be surprised if she says a prayer to France's Patron Saint, for Marion is a reminder of her - Joan of Arc," Palin wrote.

The former Alaska governor, a darling of the ultra-conservative Tea Party branch of the Republicans, said she was seduced by Marechal-Le Pen's "non-establishment" rhetoric, as well as by her "devout Catholic" faith and anti-abortion positions.

"When Marion Marechal-Le Pen speaks of France's 16 centuries of Judeo-Christian history and heritage, her rhetoric isn't about 'hate' or xenophobia. It's about love - that deep love of country we call patriotism," Palin said.

Palin, who was John McCain's running mate in the 2008 US presidential election, compared the National Front's rise in France to the success of Republican candidates like Donald Trump or Ted Cruz, also known for their far right positions.

"Call it the rise of the populists," she said.