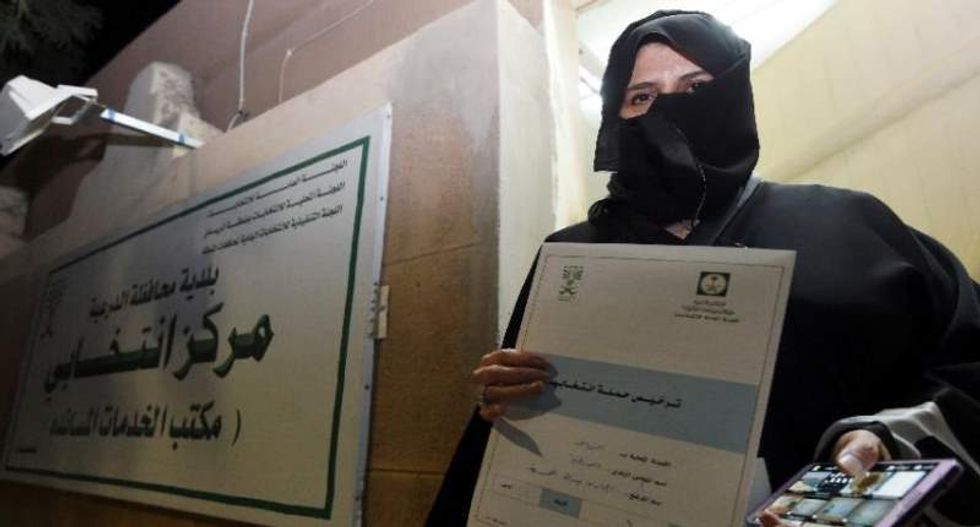 Aljazi al-Hussaini, a candidate for the municipal council in the town of Diriyah, shows an electoral campaign license on Nov. 29, 2015. (Photo by Fayez Nureldine for Agence France-Presse)

Saudi Arabia holds its first ever election open to female voters and candidates on Saturday, in a tentative step towards easing restrictions that are among the world's tightest on women.

The absolute Islamic monarchy, where women are banned from driving and must cover themselves from head-to-toe in public, is the last country where only men had been allowed to vote.

They are up against nearly 6,000 men competing for places on 284 councils whose powers are restricted to local affairs including responsibility for streets, public gardens and rubbish collection.

A strict separation of the sexes in public facilities meant that female candidates could not directly meet the majority of voters -- men -- during their campaigns.

Women also said voter registration was hindered by bureaucratic obstacles, a lack of awareness of the process and its significance, and the fact that women could not drive themselves to sign up.

As a result, less than one in 10 voters are women and few if any female candidates are expected to win.

But one-third of council seats are appointed by the municipal affairs ministry, leaving women optimistic that they will at least be assigned some of them.

Electioneering has been low key, with rules preventing photographs of candidates applied to both men and women.

But win or lose, the female contenders say they are already victorious.

"To tell you the truth, I'm not running to win," said Amal Badreldin al-Sawari, 60, a female paediatrician in central Riyadh.

"I think I have done the winning by running."

She said she became a candidate out of patriotism and because Islam gives women rights.

"Men and women have equal rights in many things," she said, reciting a relevant verse from the Koran, and adding that everyone she encountered was supportive of her campaign.

Aljazi al-Hossaini waged her 12-day campaign largely over the Internet, putting her manifesto on her website where both men and women could see it.

"I did my best, and I did everything by myself," said the 57-year-old management consultant, running in the Diriyah area on the edge of Riyadh.

But not all women trying to break the mould in the conservative kingdom had such a positive experience.

As campaigning got under way last month, three activists said they had been disqualified from running.

They included Loujain Hathloul, who spent more than two months in jail after trying to drive into the kingdom from the United Arab Emirates late last year, in a case that attracted worldwide attention.

An appeals committee reversed her disqualification just two days before the end of campaigning, Hathloul said on Twitter.

Nassima al-Sadah, a human rights activist in the Gulf coast city of Qatif, told AFP she had begun legal action over her own disqualification.

And a resident of northeastern Saudi Arabia, who asked not to be named, said the female candidate she wanted to vote for withdrew after local Islamic scholars objected.

Voters say tribal loyalties in the male-dominated society are a big factor in the ballot.

According to election commission data, nearly 1.5 million people aged 18 and over are registered to vote.

This includes about 119,000 women, out of a total native Saudi population of almost 21 million.

But women still face many restrictions, and must get permission from male family members to travel, work or marry.

Human Rights Watch welcomed the ballot as a move towards greater political participation for women.

"But Saudi Arabia continues to discriminate against women through myriad laws, policies, and practices," the US-based watchdog said.

Ruled by the al-Saud family of King Salman, Saudi Arabia has no elected legislature and faces intense Western scrutiny of its rights record.

A slow expansion of women's rights began under Salman's predecessor Abdullah who announced four years ago that women would join the elections this year.

The kingdom's first municipal ballot was in 2005, for men only.

Hossaini hopes, optimistically, that at least 10 percent of female candidates can win.

But even one would be a step forward, she said.