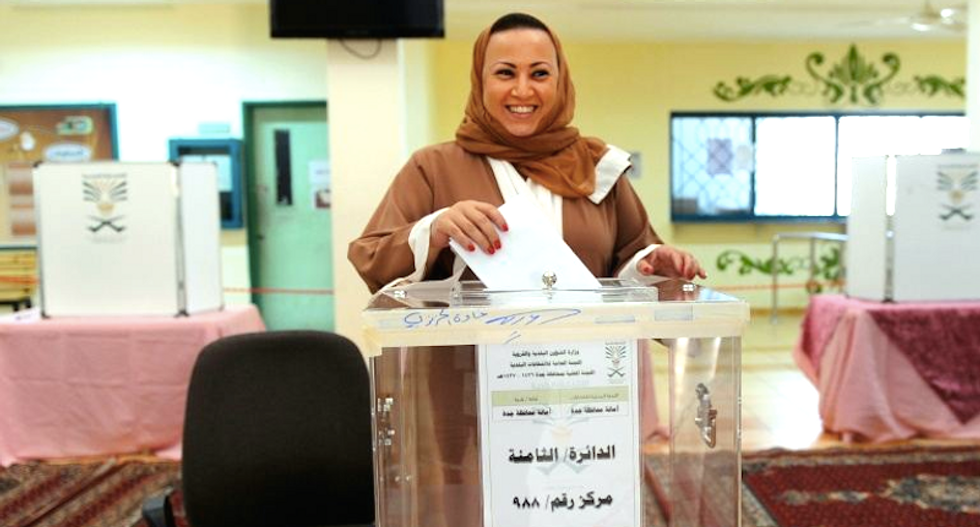 A Saudi woman casts her ballot in a polling station in the coastal city of Jeddah, on December 12, 2015 (AFP)

"Even if it was only one woman, we're really proud of that. Honestly, we weren't expecting anyone to win," said Sahar Hassan Nasief, a women's rights activist in the Red Sea city of Jeddah.

But with 2,106 seats up for election in Saturday's polls, the 14 women will constitute less than one percent of Saudi Arabia's elected council membership.

"We need more," said Aljazi al-Hossaini, who was defeated in Diriyah on the edge of Riyadh, where three women won seats, according to Saudi news channel Al-Ekhbaria.

She hoped women would be also included among the one-third of council seats which are appointed by the municipal affairs ministry.

A teacher from the small bedouin town of Mudrika outside the holy city of Mecca was the first woman to be declared a winner.

"My whole life has been a struggle," Salma bint Hizab al-Oteibi told AFP.

Khadra al-Mubarak in the Gulf coast city of Qatif confirmed to AFP that she was also among the victors.

"I will be in contact with society, especially women, to deliver their voices and demands to the council. I promise I will represent her by all means," said Mubarak, one of two women elected in the Eastern region.

Winners came from the south as well, with one woman elected in Jazan region, while two others including Lama al-Suleiman will join councils in Jeddah, the kingdom's second city, local election officials cited by SPA said.

The duties of municipal councils are limited to local affairs including streets, public gardens and garbage collection.

Saudi Arabia is an absolute monarchy with some of the world's tightest restrictions on women, including a ban on driving.

It was the last country to allow only men to vote, and polling stations were segregated during the ballot.

More than 900 women were among the 6,440 candidates standing for seats on 284 councils.

They had to overcome a number of obstacles to participate in the landmark poll.

Female candidates could not meet face-to-face with male voters during campaigning, while neither men nor women could publish their pictures.

Women voters said registration was hindered by factors including bureaucratic obstacles and a lack of transportation.

As a result, women accounted for less than 10 percent of registered voters.

According to election commission data, nearly 1.5 million people aged 18 and above signed up for the polls.

This included about 119,000 women, out of a total native Saudi population of almost 21 million.

Turnout for women was around 80 percent in parts of the country, well in excess of the figure for men, according to official data analysed by AFP.

Overall turnout throughout the Gulf kingdom was 47.4 percent, with a total of 702,542 voters, Municipal and Rural Affairs Minister Abdullatif bin Abdulmalik al-Shaikh said.

Nassima al-Sadah, an activist in Qatif, said the voting process was relatively smooth, unlike the registration.

Ruled by the Al-Saud family of King Salman, Saudi Arabia has no elected legislature and faces intense Western scrutiny of its rights record.

A slow expansion of women's rights began under Salman's predecessor Abdullah, who announced four years ago that women would take part in the 2015 municipal elections.

Men have voted since 2005 in the local polls.