Seth Meyers rips GOP fury over Obama's wording in terror speech: This isn't a spell -- and he's not Harry Potter 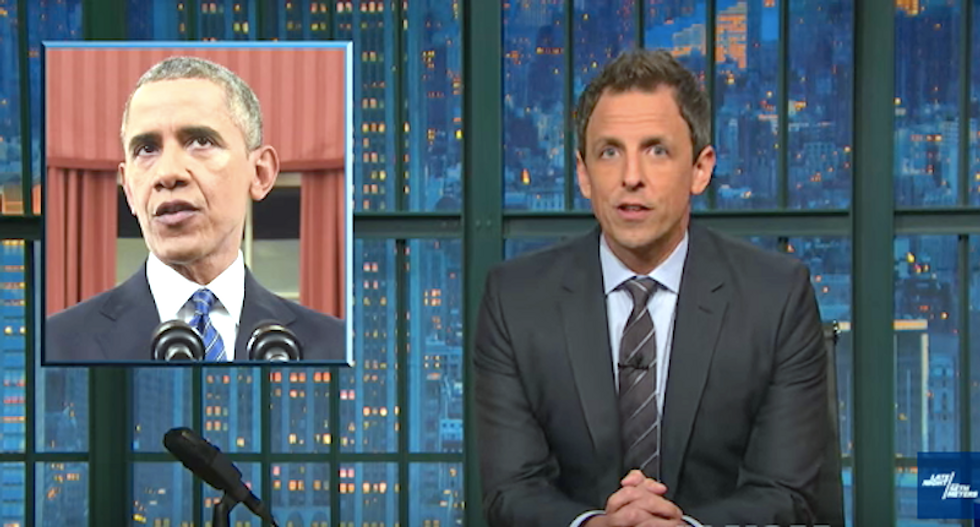 GOP presidential candidates and conservative commentators have complained for months that Obama won't use the phrase "radical Islamic terrorism," which seems to send a signal to the not-insignificant portion of the Republican electorate who believe the president is secretly a Muslim.

But Meyers played video that showed the president called on the world's Muslims to "root out the misguided ideas that lead to radicalization" and a "perverted interpretation of Islam."

"This was an act of terrorism," Obama said, referring to last week's mass shooting in San Bernardino, California, by a Muslim married couple.

"So he used the words 'radical,' 'Islam' and 'terrorism' -- he just didn't use them in the right order," Meyers said. "Which would be a problem if it was a spell and he was Harry Potter, but he's not, so it isn't."

Meyers said the president's speech was intended to calm Americans' fears over terrorism that have been stoked by "batshit crazy" media reports since the shootings that killed 14 people at a holiday office party.

He showed video of cable news reporters rummaging through the couple's apartment on live TV, and they were soon joined by curious neighbors -- including a woman with a dog.

"That's right, the media frenzy was so crazy a woman took her dog into the house," Meyers said. "Although, to be fair, the dog was actually renowned reporter Bob Woofward. The media ransacked the house like they'd just won a locker on storage wars."

Reporters sifted through the couple's quotidian belongings -- including children's toys, store receipts, computer equipment and food wrappers -- and speculated what connection those items might have to the shootings.

Meyers praised Fox News for sitting out that debacle, but he said that was the only time the conservative news network showed restraint in its reporting.

He played video clips of Fox News hosts, anchors and guests pinning the attacks on Obama and stoking fears of Muslim Americans and immigrants -- including the contributor who suggested Americans call the police if 'somebody named Syed leaves your party."

"That is the cruelest proposal I've heard yet," Meyers said. "Due to Islamophobia, Muslims now have to stay until the end of office holiday parties. The end of holiday parties are the worst part. The alcohol's gone, Janet from accounting is trying to get you to drink a Windex-and-tonic, somebody's trying to drunk dial their ex on a fax machine. When a person leaves a holiday party early, I don't think, 'There goes a terrorist' -- I think, 'That lucky son of a b*tch must have something better to do.'"

Meyers said the conversation eventually turned to gun control, which upset many conservatives -- including Sen. Marco Rubio, who wondered why no one talked about "bomb control."

"Yeah, that's right," Meyers said sarcastically. "Why aren't bombs illegal? How come you can just walk into any Wal-Mart, go to the bomb aisle and buy a bomb, no questions asked."

Meyers said Rubio's absurd remarks were outdone by fellow GOP presidential candidate Mike Huckabee, who said the killers' intent was more important than their choice of weapon because even a pencil could be used to kill.

"If somebody kicked in my door and yelled, 'Get ready to die,' I'd be a whole lot happier if they were holding a f*cking pencil," Meyers said.