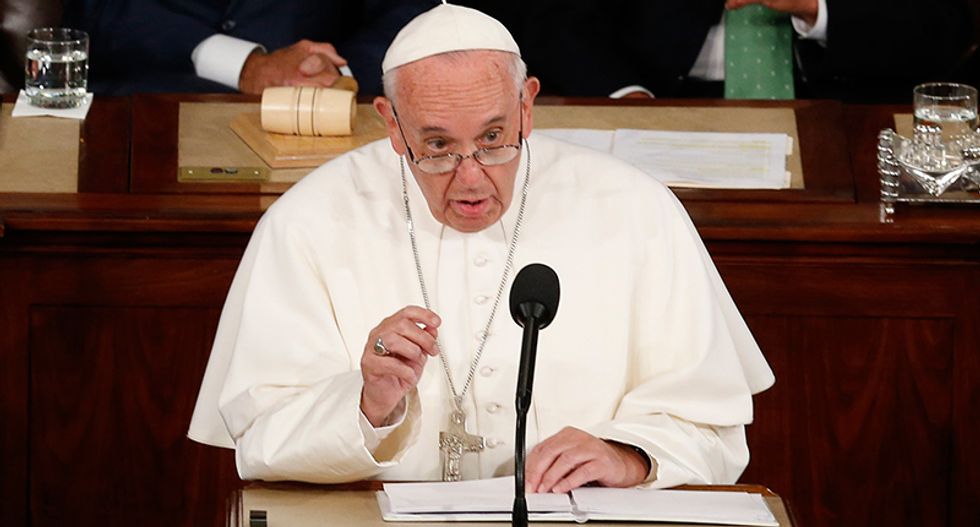 Pope Francis vowed Monday to power ahead with the reform of the Curia, the Church's "diseased" governing body, throwing down the gauntlet to those fostering a climate of intrigue, greed and double-crossing in the Vatican.

His annual address to cardinals, bishops and priests running the Holy See echoed his speech at this time last year, when he suggested the Vatican's administrative hierarchy was beset by a "spiritual Alzheimer's" and a lust for power.

Though the December 2014 speech embarrassed and infuriated many of the Vatican's top figures, it appeared to have failed to convince the unruly Curia to change its ways -- with fresh scandals blotting the government's copybook in 2015.

The pope reminded the Curia he had chastised them last year for "certain temptations or maladies... diseases which call for prevention, vigilance, care and, sadly, in some cases, painful and prolonged interventions."

"Some of these diseases became evident in the course of the past year, causing no small pain to the entire body and harming many souls," he said, in a reference to a second embarrassing leaks scandal at the heart of the Holy See.

Three people accused of stealing and leaking secret papers are currently on trial at the Vatican, along with two journalists accused of publishing the documents, which depict irregularities and extravagance in the Holy See's spending.

The year has also been marked by allegations of clerical sex abuse, stories of wild Vatican parties, accusations of charity money being spent on a cardinal's apartment and rumours appearing to originate within the Church of the pope's ill health.

The controversial or scandalous incidents were seen by some as a bid to discredit Francis, the driver behind a summit this year on the Church's approach to family values which bitterly divided conservatives and liberals.

The start of the convention was overshadowed by the 'coming out' of a Polish priest who worked at the Vatican and was quickly followed by a scandal over priests in Rome having sex with male prostitutes and vulnerable people in a city park.

At a meeting with the Vatican's employees and their families on Monday, Francis asked "forgiveness for the scandals".

The pontiff, who was elected in 2013 on a mandate to bring the powerful but fractious Curia into line, promised cardinals, bishops and priests he would "move forward with determination, clarity and firm resolve" with his reforms.

Francis presented them with a "catalogue of needed virtues" -- a 12-point "practical aid" of guidelines including "setting an example" for the faithful and being honest, charitable and humble.

Honesty, he underlined, was key: it is "the foundation on which all other qualities rest".

"An honest and open person does not act virtuously only when he or she is being watched; honest persons have no fear of being caught, since they never betray the trust of others," he added.

Not everyone was given black marks. The pontiff expressed his "heartfelt gratitude and needed encouragement to all those good and honest men and women in the Curia".

Moreover, he ended on an upbeat note, insisting that problems were just "opportunities for growth, and never for discouragement".