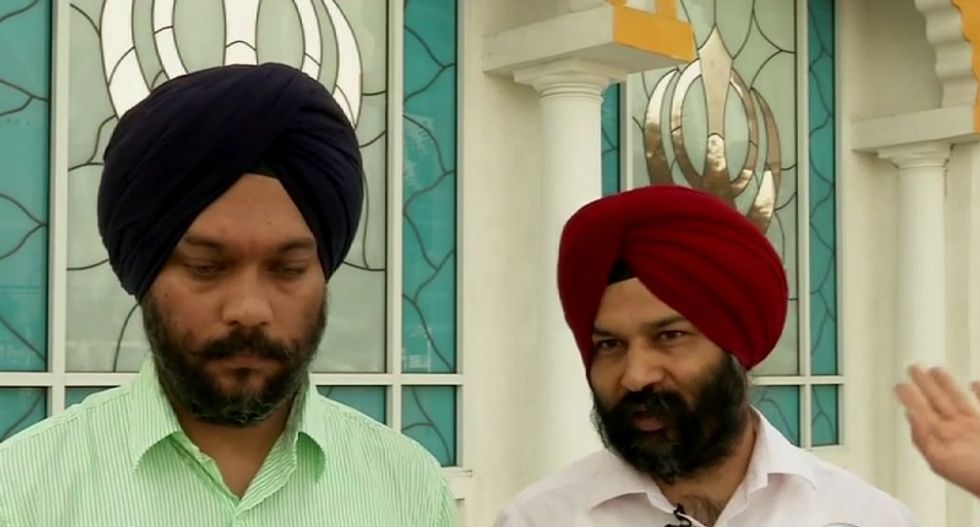 Perhaps influenced by the recent terrorist attack in San Bernardino coupled with anti-Muslim rhetoric by GOP front runner Donald Trump, American Sikhs are feeling the pressure to ramp up security at their temples and point out that they are not Muslims to avoid violence.

Sikhism is a religion predominantly associated with the Punjabi region of India and is not related to Islam. Devout men of the faith wear turbans. Sikhs are often mistaken for Muslims in the United States and it has resulted in their being victimized in hate crimes, Religion News Service reports.

Jaspreet Singh is a member of the Sikh temple in Buena Park, a city located in Orange County, California. He felt the need to take time off work to attach signs to the temple that say security cameras are present.

The temple also now bears a brightly-colored sign with an American flag that reads, "We are American Sikhs. We pray for the victims of San Bernardino."

The temple was recently vandalized with language about the Islamic State, a terrorist group.

"Whenever terrorists attack, or any such incidents happen, there have always been backlashes," Singh told RNS.

Brodie Durazo, 20, of Buena Park, was arrested and apologized to the temple community, NBC News reports.

Singh was targeted with hate speech even as he went to buy the security equipment. A woman in the parking lot started shouting expletives at him and told him to get out of the United States.

The graffiti at the temple, Gurdwara Singh Sabha, was found days after the San Bernardino attacks, in which 14 people were killed. Early media reports said the attackers, Syed Farook and Tashfeen Malik, pledged allegiance to ISIS. But since then, the FBI has backtracked and said that there is no evidence they had any connection with the extremist group.

The incidents are disturbingly common. In September, Inderjit Singh Mukker was severely beaten by a man who called him Bin Laden. The attack on the Sikh man happened ahead of the anniversary of the 2001 terrorist attack. Mukker was trying to go to the grocery store.

Perhaps the most high-profile attack on Sikh people happened in 2012, when Wade Michael Page opened fire on a temple in Wisconsin, killing six before he turned the gun on himself.

"Political rhetoric now is certainly fanning the flames of ignorance and fear," Simran Jeet Singh, professor of religion at Trinity University, told RNS. He also cautioned against stopping the conversation at framing the violence as mistaken identity.

“By framing it as mistaken, there’s an implication that there’s a correct identity who should be targeted,” Professor Singh pointed out. “And it takes away agency and accountability from perpetrators, like it should, in some way, be forgivable.”

Singh is a common Sikh surname and the professor is not related to Jaspreet.

Watch a report on the vandalism, from ABC7, here: