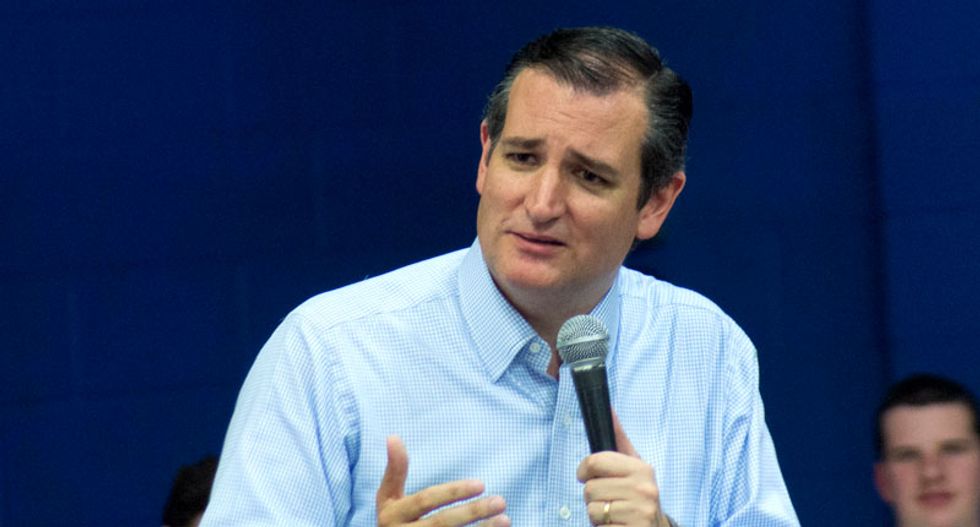 Ted Cruz on Monday offered a spirited defense of Republicans on women's health issues, accusing Democrats of creating a phony "war on women" based on claims that his party wants to restrict access to birth control.

"The last I checked, we don't have a rubber shortage in America," the GOP presidential candidate said during a town hall here, responding to a question about the availability of contraception to women who want it.

"Look, when I was in college, we had a machine in the bathroom. You'd put 50 cents in and voila!" added Texas' junior senator, who attended Princeton University and Harvard Law School. "So yes, anyone who wants contraceptives can access them, but it is an utterly made-up, nonsense issue."

Cruz said the suggestion Republicans want to ban contraceptives is spread by Democrats like former Secretary of State Hillary Clinton because their views on another issue important to women — abortion — are outside the mainstream. Cruz further speculated that Clinton, the frontrunner for the Democratic presidential nomination, has put the issue of birth control front and center because she is unable to run on the economy, health care reform and foreign policy.

"So what do you do?" Cruz asked. "You go, 'Aha! The condom police. I'm going to make up a completely made-up threat and try to scare a bunch of folks that are not paying a lot of attention into thinking someone's going to steal their birth control.'"

Cruz did not spare his fellow Republicans in his rant, accusing them of timidity in the face of Democratic criticism on women's health issues during the 2012 election cycle.

"When the war on women came up, Republicans would curl up in a ball," Cruz said. "They'd say, 'Don't hurt me!' Jiminy Cricket! This is a made-up, nonsense example."

The discussion elicited at times awkward laughter inside a reception hall in this eastern Iowa city. That was especially true when Cruz noted he and his wife Heidi have two young girls — and are "very glad we don't have 17."

The Democratic National Committee pounced on Cruz's comments on contraception, advising him to "quit mansplaining women’s health and listen to women who know how ridiculous his statements are." The DNC also said Cruz has in fact supported policies that would make it harder for women to obtain birth control, positions at odds with his assertion in Bettendorf that he has yet to encounter "anybody, any conservative, who wants to ban contraceptives."

"Ted Cruz was right about one thing tonight: Republicans are ‘completely puzzled’ when it comes to women’s health care," Kaylie Hanson, the DNC's director of women's media, said in a statement. "His insistence that condoms are a substitute for the contraception many women need to prevent unintended pregnancies, and for other health reasons, shows he hasn’t got a clue when it comes to women’s health."

Cruz's remarks on contraception came at the final event of a three-day, 14-stop swing through early voting Iowa.