Televangelist: God put dinosaurs in the Bible as the 'poster child for creationism' 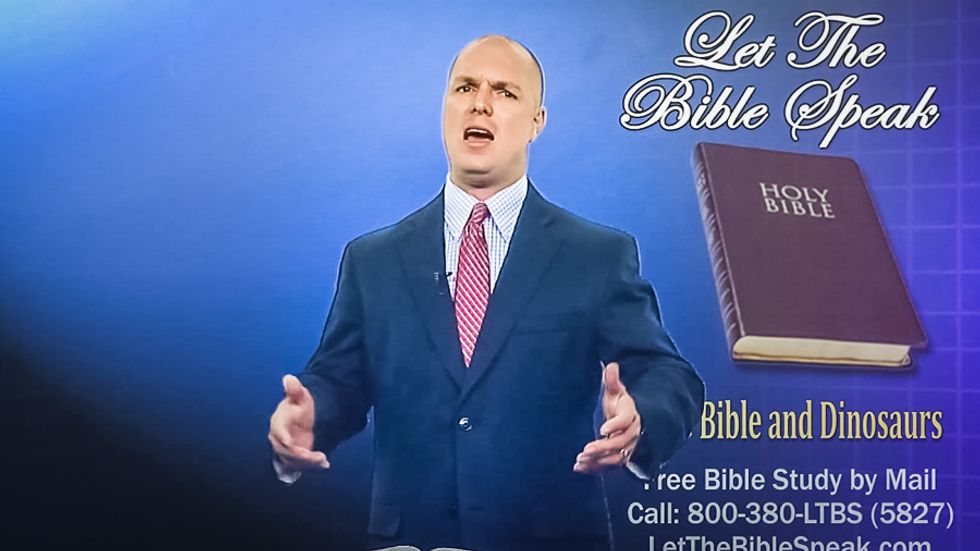 Pastor Brad Shockley told viewers of the Let The Bible Speak television program over the weekend that the Bible proves that dinosaurs -- and dragons -- lived on the Earth at the same time as humans.

On Sunday's broadcast of Let The Bible Speak, Shockley lamented that the creationist view on dinosaurs was "rarely credited" by the media.

"We often have a difficult time convincing others this is the proper explanation," Shockley said. "The creationist accepts the teaching of Genesis and teaches that dinosaurs were created on day 5 [and] day 6."

The pastor noted that humans were also created on day 6 and "shared this world with the dinosaurs" and "all of these events took place approximately 6,000 years ago."

According to Shockley, schools were using dinosaurs to "indoctrinate" children with lessons about science and evolution.

"Realizing mom and dad couldn't not defend their religious beliefs, they ignorantly stumble into believing the theories of evolution and abandon their faith," he insisted. "Evolutionary doctrine on dinosaurs denies the Bible, creation, the existence of God and, by default, ultimately denies Jesus Christ is the son of God and our redeemer."

Shockley admitted that the word dinosaur had never been referenced in scripture, but he pointed to the Book of Job as evidence that dinosaurs walked the Earth with man.

In fact, Shockley argued that one creature described in Job was a fire-breathing dinosaur or "dragon."

"The truth is, dinosaurs should be used as the poster child for creationism," he concluded. "And we have no problem harmonizing our faith with the Bible explanation of dinosaurs."

Watch the video below from Let The Bible Speak.