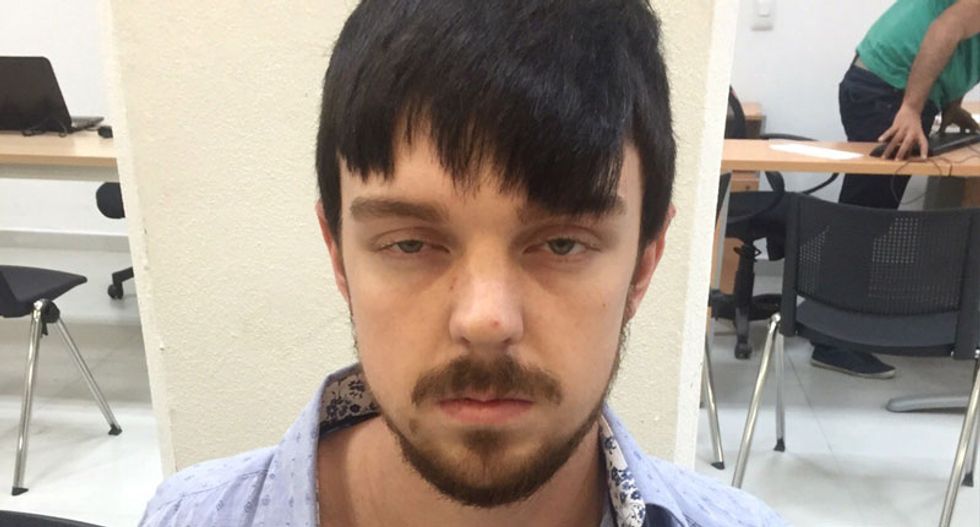 A wealthy Texas teen who had been a fugitive after breaking his probation sentence for killing four people while driving drunk, was likely to be returned to the United States later on Tuesday after being caught in Mexico, Mexican authorities said.

Ethan Couch, 18, and his mother, Tonya Couch, were taken into custody on Monday evening in the Pacific Ocean resort of Puerto Vallarta.

Couch became known in the United States as the "affluenza" teen during his trial in juvenile court over the 2013 deaths, when a psychologist said he was so wealthy and spoiled he could not tell the difference between right and wrong.

He has been serving 10 years probation for intoxication manslaughter, a sentence critics saw as far too light.

Couch and his mother apparently entered the country by land, said Ricardo Vera, a local official for Mexico's National Migration Institute. He said the two did not register when entering Mexico, but it was not clear where they came in.

They were expected to be returned to Houston on a commercial flight later on Tuesday from Jalisco's state capital, Guadalajara, Vera said.

In Texas, Tarrant County Sheriff Dee Anderson said that when the Couches arrived back in the United States, the young man would appear in juvenile court and his mother would be arrested for hindering apprehension.

"They had planned to disappear," Anderson told a news conference in Fort Worth, Texas. "They even had something that was almost akin to a going-away party before they left town."

Ethan Couch's attorney, Reagan Wynn, said in a statement he had not had the chance to speak with his client and did not expect to be able to until Couch was back in the United States.

"Until we have more information concerning this situation, it would not be prudent for us to make any further public statement," he said.

Couch and his 48-year-old mother disappeared earlier this month, prompting officials in Tarrant County, to issue a warrant for his arrest.

The two were captured at the crossing of two streets near the popular Malecon, or seafront promenade, in Puerto Vallarta.

A police booking picture from Mexico showed the previously blond Ethan Couch with dark hair. The sheriff said Couch's darker hair suggested he was trying to change his appearance.

Tarrant County District Attorney Sharen Wilson said that she expected the judge to hold Couch after his juvenile hearing, and hoped it would be in an adult jail.

If Couch were transferred into the adult court system, he could face 120 days in jail for fleeing and up to 40 years in prison if he violated probation again, Wilson said.

Mexican authorities said they had been working with the U.S. Marshals Service since Saturday to locate Couch and his mother.

U.S. Marshal Rick Taylor told the Texas news conference that Mexico was treating Couch and his mother as "undesirables" and would likely expel them. He and Anderson declined to say how authorities tracked Couch down.

Police handed the pair over to Mexican immigration authorities for being in the country without the proper permission so they could be returned to the United States, the Jalisco State Attorney General's Office said.

Couch, then 16, was speeding and had a blood-alcohol level of nearly three times the legal limit when he lost control of his pickup truck and fatally struck a stranded motorist on the side of the road and three people who had stopped to help.

Several passengers riding in Couch's vehicle were hurt, including one friend who was permanently brain damaged.

Tarrant County began investigating this month after a video on Twitter appeared to show the teen among a group around a table littered with plastic cups and cans of beer in a game of beer pong. That would have been a violation of his probation, the Tarrant County District Attorney's office previously said.

Anderson had said last week it was possible Couch and his mother had fled the country. He said the home they shared had been cleared of its contents. Their passports had been reported missing by the teen's father, who has cooperated with investigators.

The U.S. Marshals Service had offered a $5,000 reward in exchange for information on his whereabouts.

Officials at the U.S. Embassy in Mexico City declined to comment for privacy reasons, saying only that they would provide any necessary consular assistance.

(This version of the story corrects family name to Couch in paragraphs 5, 17)