The 9 dumbest things said by conservatives in 2015 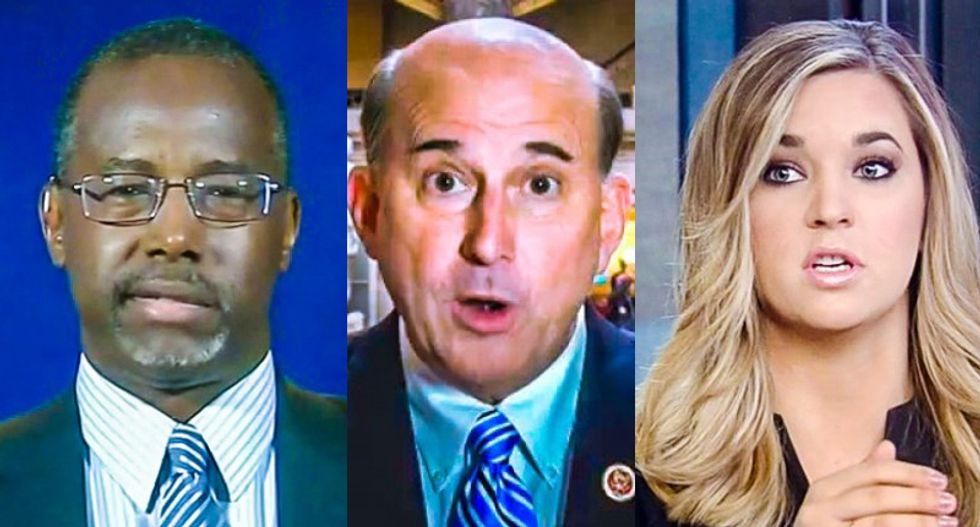 Being asked to collect the dumbest things said by conservatives in 2015 is not exactly like being be asked to complete the 12 labors of Hercules, although upon completion I did feel like I had just finished mucking out a particularly disgusting stable.

It was akin to looking for a needle -- in a needle factory.

What was surprising however, was how few stupid comments originated on Fox & Friends or came from the gaggle of goofballs running for the 2016 GOP presidential nomination. For the candidates, saying only slightly stupid things allows them to appeal to the base while not scaring off the big money that one -- or possibly two -- of them will need after this idiot Hunger Games draws to its bloody completion.

With that in mind, let's pull on our hip-boots and wade waist-deep in the big muddy of moronic statements that are a dominant feature -- and not a bug -- of conservatism.

Pyramid grain silos: Buzzfeed discovered video of Carson stating his belief that ancient Egyptians stored grain in the pyramids, saying, "My own personal theory is that Joseph built the pyramids to store grain. Now all the archaeologists think that they were made for the pharaohs’ graves. But, you know, it would have to be something awfully big — when you stop and think about it, and I don’t think it’d just disappear over the course of time — to store that much grain.”

Marijuana is the only vegetable that is bad for you: The Rev. Pat Robertson, who is wheeled out and plopped into a chair to answer questions on an almost daily basis for the 700 Club, warned that God never intended for us to be consumed by "reefer madness" when we abused that ole demon ...vegetable.

Sticks and stones may break my bones, but "tiny bullets" cannot hurt me: Regis Giles, of Girls Just Want To Have Guns, explains that attempts to ban some bullets that can pierce police Kevlar vests is foolhardy because they couldn't hurt a flea -- that is  how tiny they are.

“Sorry, it’s actually target ammunition. And no person who uses a gun to carry will use this because it’s not as effective as others. And to say that this is going to pierce through the armor of cops is ridiculous because it’s a tiny bullet like this big,” she added, demonstrating the size with her fingers. “And to say that the cop’s Kevlar isn’t tough enough to handle that ammunition is ridiculous. And like the FBI said, no one has used this in a handgun to shoot a cop.”

“When people make clear that they are going to commit murder or genocide, how long do you have to wait before it is okay to stop them? Well, the President has made clear it may be time to move out of the way so that these Palestinians that want to obliterate Israel can have their will,” Gohmert stated. “I am not accusing anybody, I am raising questions. If the United States says, ‘Here, Palestinian terrorist groups, we want to provide you the vehicle to have a powerful place right in the middle, a huge section of Israel. We want to give you that place, and you have made clear, we know you have made clear, once you are there, you are going to wipe out Israel,’ does that make the United States’ leaders that facilitate that, does that make them accessories? I am just asking. Mr. Speaker, you can advise the Parliamentarian, I am not accusing anybody.  I am just asking the question.”

No rape please, it's déclassé: Overbearing "Princeton Mom" Susan Patton on the link between rape and sex education.

“I think the numbers that have been thrown around as to the frequency with which rape and sexual assault occurs have come into question, and have been debunked in a of number platforms. I think it’s a huge exaggeration, a reckless exaggeration of what actual rape statistics are or what actual sexual assault statistics are,” Patton helpfully explained. "“And just like I don’t think sex ed belongs in school — we shouldn’t be teaching sex ed in school, that’s something parents should be teaching their children — manners, which is really what we’re talking about here. Keep your hands to yourself, don’t be bullying anybody, you don’t touch somebody, you don’t want them to touch you, you tell them not to. Again, this is manners, this isn’t sex ed… And even that should be taught at home.”

We're gonna need a bigger ocean --one without sharks would be nice: Fox & Friends host Brian Kilmeade can't understand why sharks are allowed to bumrush a surfing competition.

“I think that the most shocking thing is that after you hear about the six attacks in North Carolina, okay, these are just swimmers. But then when you see a champion surfer and you have a three camera shoot and an overhead shot, [you] say, ‘Oh my goodness, it could happen anywhere,'” Kilmeade said. "You would think that they would have a way of clearing the waters before a competition of this level. But I guess they don’t.”

It should be noted that co-host Elizabeth Hasselbeck agreed with Kilmeade. Because ... of course she did.

"I'm not a racist, but...: Kilmeade again, asking black Fox News host Harris Faulkner if she makes Kool-Aid for Thanksgiving.

“Do you make Kool-Aid?” Kilmeade asked.

“Uh, do I do what?”  a stunned Faulkner replied.

“To me, especially in the Northeast, confronting my white privilege is going to the tanning salon,” Pavlich explained. "Look, we’re talking about this white privilege issue, and yes, it’s funny and it’s easy to laugh at, but I actually think it’s quite racist, and I think we have to talk about it in those terms. You’re being prejudiced towards people based on the color of their skin, and I reject this idea that only white people can be racist when white students on these university campuses are now being ostracized for the color of their skin.”

Lady plumbing? How does it work?: We have to give the Grand Bull Goose Loony Prize to Idaho State Rep. Vito Barbieri  (R) for the extraordinary exchange when he tried to compare telemedicine abortion procedures to colonoscopies during a legislative hearing.

“You mention the risk of colonoscopy,” Barbieri told physician Julie Madsen. “Can that be done by drugs?”

“It can not be done by drugs,” Madsen replied. “It can, however, be done remotely, where you swallow a pill, and this pill has a little camera and it makes its way through your intestines, and those images are uploaded to a doctor who’s often thousands of miles away who then interprets that.”

“Can this same procedure be done in a pregnancy — swallowing a camera and helping the doctor determine what the situation is with the child?” Barbieri asked.

“It cannot be done in pregnancy simply because, when you swallow a pill, it would not end up in the vagina,” she answered prompting loud laughter from within the chamber.