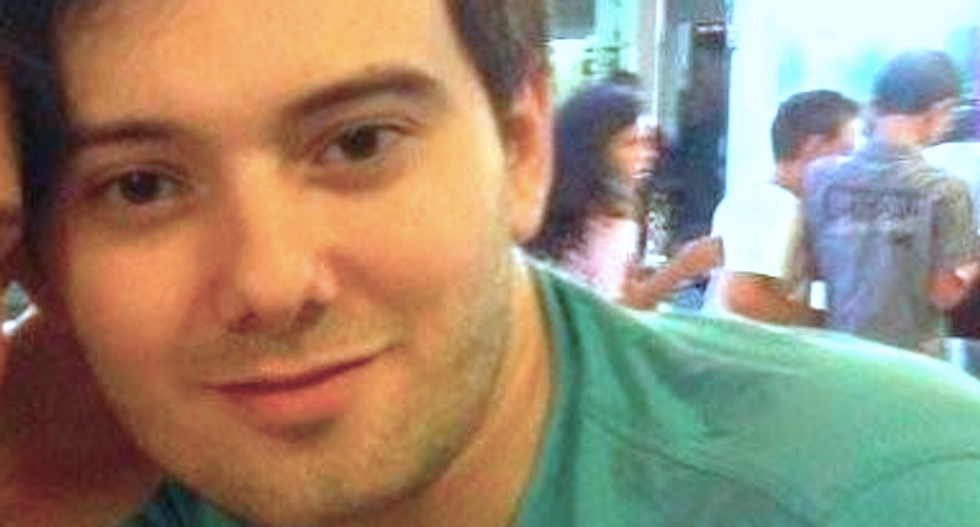 We all hate the price-gouging, bottom-feeding pharmaceutical bro. But, like most CEOs, he’s unlikely to face real punishment for his alleged misdeeds

The elves of schadenfreude would seem to have much to celebrate this holiday season with the news that the price-gouging pharmacy bro Martin Shkreli is in police detention, pending federal charges of securities fraud.

Shkreli, of course, rocketed into public infamy over recent reports that the bottom-feeding concern he captains, Turing Pharmaceuticals, had elected to hike the price of a 70-year-old medication known as pyremethamine (used in the treatment of Aids and parasitic infections) from $1.50 to $750 per pill.

The self-infatuated 32-year-old cretin – who calls to mind a chilling alternate universe in which Justin Beiber is a Hitler Youth leader – was unscathed by the torrent of criticism and abuse that came in the wake of this bout of unwelcome publicity. (It no doubt helped Shkreli to carry off his posture of Wall Street omnipotence that he hasn’t at all been slowed down by the tedious work of actually comprehending just how the science of this drug worked.) He insisted that he was simply doing the market-savvy product repositioning that his shareholders expected from him.

And in a sense, Shkreli is right. He’s not facing federal prosecution for his gaudy, greedy philosophy of the pharmaceutical price point. In the mobbed-up world of medication for profit, there are no penalties for milking the final dime from a desperately sick patient’s cash reserves. No, that’s the glorious rent-seeking genius of our free-enterprise medical system, even after the socialist apparatchiks of the Obamacare regime got their grubby mitts on it.

Instead, Shkreli appears to have been hauled up on charges of C-suite chicanery, stemming from his earlier tenure at the helm of another drug firm called Retrophin. The specifics of the charges will become clearer after the boyish CEO’s formal arraignment, but there is, fortunately, an eye-popping civil suit pending against Shkreli for the many abuses he allegedly sprung on the guileless Retrophin board of directors.

This suit contends that Shkreli used Retrophin as a virtual ATM machine to dispense cash and company shares of disgruntled investors in Shkreli’s erstwhile hedge-fund, yet another health-care syndicate called MSMB Capital.

The lawsuit alleges that Martin Shkreli, self-proclaimed master of the universe, launched his hedge-fund career with a disastrous belly flop: a cash-hemhorraging trade with Merrill Lynch involving Orexigen Therapeutics, which was seeking to develop a new weight-loss drug. As a result of the Orex deal, “MSMB Capital lost over $7 million, and was virtually bankrupt”, the Retrophin complaint alleges, before drily noting: “Shkreli did not tell his MSMB Capital investors that he had lost all their money as a result of the Orex Trade.”

Instead, the nimble, fast-talking lout created Retrophin and a company called MSMB Healthcare – shell companies that allegedly created the illusion of ongoing profitable Shkreli-led market activity while also neatly doubling as sources of equity with which to pay off or otherwise placate MSMB Capital investors seeking either their money back or, God forbid, a measure of justice.

Toting up the wide array of elaborate stock issuances and cash payouts that Shkreli employed in engineering this shell game, the suit seeks $65m in damages – a comparatively modest sum, given the scale of Shkreli’s enterprise.

Against that backdrop, the shameless price-gouging policy of Shrekli’s latest vesture, Turing, starts to make a sick sort of market sense. Like a millennial Bernie Madoff, Martin Shkreli almost has to kite fraudulent stock deals and other dubious means of profit maximization to stave off the aggrieved corps of ground-floor investors he’s accused of initially misleading and defrauding.

But this is where a much longer-running, far sicker joke is poised to kick in – the one known as federal criminal prosecution of large-scale financial malefactors. For all the short-term tabloid attention that Shkreli’s prosecution is likely to garner, the odds against a truly satisfying, Madoff-style turn in the hoosegow for our boy CEO are steep.

That’s because the legal pursuit of financial titans is notoriously compromised and corrupt. University of Virginia law professor Brandon L Garrett conducted an exhaustive study of more than 2,000 criminal prosecutions of business organizations from 2000 to 2012, and published the results in his recent eloquently titled book Too Big to Jail .

Less than half of the 273 publicly traded firms facing criminal charges went through the motions of an actual trial, Garrett found; the remaining 54% of such companies either entered into cushy “deferred prosecution” deals – generous, laxly enforced agreements to improve the “culture” of criminal malfeasance at the wayward firm in question – or simply skirted prosecution altogether.

And once these deals are struck, the fix is truly in, financially speaking. Garrett calculates that criminal fines extracted by the feds amount to just .04% of the market capitalization for the firms that enter into these agreements. (That would leave plenty of cash lying around for the bad-acting CEOs in question to spring for a secret Wu-Tang Clan CD , for example, or any number of other ego-flattering baubles.)

It may well be, of course, that Martin Shkreli, thanks to his own big mouth and unapologetic glee over shaking down sick people for profit, proves to be an outlier in this cruel parody of justice served. But don’t bet on it.

Way back in 2004, federal prosecutors managed to secure the conviction of another celebrity investor and business mogul whom the American public loved to hate: Martha Stewart, whose pastel-clad rear end was packed off to the federal penitentiary in Alderson, West Virginia on charges of insider trading involving a pharmaceutical company called ImClone. (That company’s signature drug, Erbitux, which almost no one noted with horror at the time, had a marketing price point of $1,000 per injection.)

ImClone’s CEO Sam Waksal also did a brief tour behind bars, but the company continued to thrive, netting a cool $6.5bn in a takeover by Eli Lilly. Waksal himself has brushed off his prison detour to found and captain a biotech startup called Kadmon Pharmaceuticals. Kadmon is currently positioning itself for an IPO which, under SEC rules, has forced Waksal to surrender his CEO post to his brother Harlan. But the big plan has run aground among a lawsuit alleging – yes – securities fraud .

So let’s not get too giddy over the specter of Martin Shkreli in an orange jumpsuit. Even in the unlikely event that he’s tried and convicted, the system is plainly set up for him to learn nothing at all from the experience.