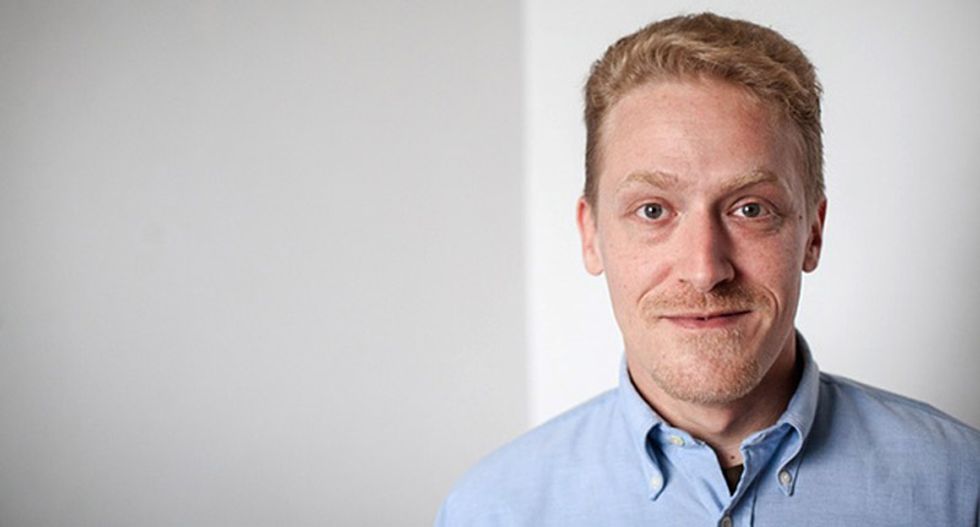 Nick Merrill has been through almost 12 years of silence and secrecy. Photograph: Thatcher Cook/PopTech

On a snowy afternoon in February 2004, an FBI agent came to Nick Merrill’s door, bearing a letter that would change his life .

At the time, Merrill was running a small internet service provider called Calyx, with offices just below Canal Street on Manhattan’s west side.

The man who came to see him was well-built; older, with white hair. It was snowing; the man at the door wore a trenchcoat. “He looked like an FBI agent from central casting,” Merrill said. “He was so classically FBI.”

The envelope that the agent carried contained what is known as a “national security letter”, or NSL. It demanded details on one of his company’s clients; including cellphone tower location data, email details and screen-names.

It also imposed a non-disclosure agreement which was only lifted this week, when – after an 11-year legal battle by Merrill and the American Civil Liberties Union, he was finally allowed to reveal the contents of the letter to the world.

The NSL which Merrill was given was a new use for what was a relatively old tool; the FBI had long – if sparingly – used them if there was probable cause for them to make such a requisition, for example to oblige a hotel to turn over information on its guests.

But the Patriot Act vastly expanded the scope of what an NSL could be applied to; they have been used to obtain credit reports, banking information, internet records, phone and email records. The FBI greatly increased the number issued; according to a 2007 inspector general’s report , the NSL that Merrill was handed by the agent was one of nearly 57,000 issued that year.

All of those thousands of NSLs were accompanied by a non-disclosure agreement, or “gag order” – which barred recipients were ever disclosing that they had received an NSL – even to the person whose records were being sought.

Merrill read his letter at the office door. When he got to the gag order, he looked up at the agent – who was still standing there – in shock. “I said: ‘What about my lawyer?’” Merrill recalled. The agent replied that he was “not authorised” to answer his questions.

First, Merrill went online. He read the Patriot Act, but found it confusing and full of clauses like nesting matryoshka dolls. After stewing for a couple of days, building up his courage to break the terms of the letter, he called his lawyer and asked him to meet him in person.

His lawyer, a friend of Merrill’s who specialises in corporate law, quickly recognised that he would need backup. He and Merrill contacted the American Civil Liberties Union’s New York branch, who used Calyx for web services. There they met with Arthur Eisenberg, who introduced Merrill to a young lawyer called Jameel Jaffer.

“I had never seen a national security letter at that point,” Jaffer said. “We had to scramble around to figure out what it was.” Jaffer was particularly appalled by the circular nature of the gag order.

“The only entity named was the FBI, and it was the FBI that had imposed the gag order,” he said. “That was what was most offensive to me.”

With the ACLU, Merrill went to court to challenge the constitutionality of the letter, especially of the gag order.

The case, in which Merrill was listed as a “John Doe” because of the terms of the order, was against the attorney general, John Ashcroft, FBI director, Robert Mueller, and FBI senior counsel Marion Bowman.

The same year, Victor Marrero, a district court judge, sided with Merrill against the federal government, finding that the letter violated his fourth amendment rights. A year later, in response, Congress amended the statute. Merrill went to court again; again, the district court struck down the law. In 2008, a second circuit judge affirmed that decision.

Throughout the process, the gag order kept Merrill in frustrated silence. “Over the course of seven years I had two different girlfriends, and they both knew something was going on that I wouldn’t tell them about,” he said. “They didn’t like it.” He said that he felt that if he told anyone, he would be making them as burdened with this secret as he was.

“You’re obviously lying by omission all the time, because people come up [to you] and say, ‘Hey you seem down today, what’s going on’, and you can’t tell them. Or certain days, like when the court stuff was going well, I’d be really excited but couldn’t share it with anyone. It cut me off from the people who in normal life would be your support network. Close friends, family. So it was extremely weird.”

The problem was, Jaffer said, that the FBI were implementing laws in secret, and – until Merrill – largely with impunity. “It turns out that the government’s interpretation of the law is much, much broader than anyone had thought,” he continued.

“You see this pattern over and over again: you have a relatively narrow surveillance law that is implemented in a sweeping way, in secret. So the public thinks there are limits on government’s surveillance powers, [but] the government interprets the limits in the weakest possible way.”

In 2014, Merrill sued again, helped by graduate students at the Yale Law Clinic. Finally, in August, the news came that the judge had ruled that the gag order be completely lifted.

After waiting out the period in which the Department of Justice could appeal, Merrill received permission on Monday to publish the full, unredacted version of the letter.

He said he had no idea how to respond. “I have this weird feeling that maybe this is a dream, maybe I dreamed I was allowed to talk about it,” he said.

“As a result of this challenge, anyone who gets a gag order can walk into a federal court and challenge [its] legitimacy,” Jaffer said. “That’s not something that was true in 2002.”

It had taken Merrill almost 12 years of silence and secrecy.

He asked the graduate students at the Yale Law Clinic who had been helping with the appeals process to put out the documents; it just didn’t feel right, after all these years of secrecy, making them public. For Merrill, it had become ingrained.