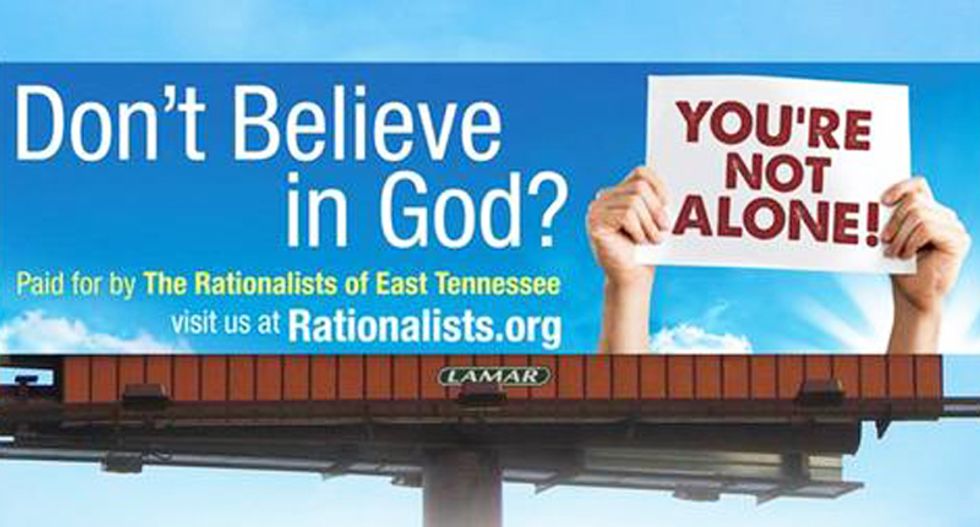 An atheist billboard paid for by the Rationalists of East Tennessee (Patheos.com)

In 2015, atheists began to assert themselves even more in the public square as prominent atheists such as HBO host Bill Maher, biologist Richard Dawkins, and neuroscientist Sam Harris used cable television and social media to openly discuss their lack of faith in a world that has become consumed by religious fundamentalism of all stripes.

While there have been some set-backs, atheists scored wins at the grassroots level and in the courts that were not intended to destroy religion and take away the rights of people of faith -- but to protect and acknowledge the rights of non-believers and remove religious influence over public policy.

Christian arguments that Adam and Eve are depicted in the Bible — and not Adam and Steve -- failed to persuade five of the sitting justices to deny equal rights to a segment of society demonized and reviled by religious bigots.

The collapse of the Duggar media empire: Nothing quite gladdened the hearts of atheists -- and many non-atheists -- than watching the fundamentalist Christian Duggar family face intense scrutiny after it was revealed that they had shielded eldest son Josh from criminal charges after he had molested four of his pre-teen sisters in order to keep their squeaky-clean reputation spotless. An interview on Fox with parents Jim Bob and Michelle Duggar failed to stop the bleeding and the TLC network was forced to cancel their show 19 Kids and Counting as advertisers fled in terror.

Kim Davis became the face of Christian intolerance:  Directly related to the Supreme Court's ruling on same-sex marriage, Kentucky County clerk Kim Davis was sent to jail for defying the legal system and failing to issue marriage licenses to gay couples. Stating that same-sex marriage was in conflict with her Christian beliefs, the four-time married civil servant was even criticized by conservatives for not doing her job and for hurting Christianity.

Prayer shaming:  Whether "prayer shaming" is "a thing" or not, criticizing politicians for offering up their "thoughts and prayers" to the families and victims of gun violence instead of acting to prevent more tragedies, help to advance the cause of sensible gun control. At the same time politicians were put on notice that that hiding behind religious pieties won't always win the hearts and minds of voters.

The Satanists win with coloring books: Satanists used their Dark Lord's most effective tool -- children's coloring books -- to defeat a plan by Christians to distribute bibles at a Florida school district. Orange County Public Schools had planned to allow outside religious groups to take part in an observance of Religious Freedom Day by handing out Bibles to students who wished to take them. Those plans were abandoned after the Satanic Temple and Freedom From Religion Foundation (FFRF) said they would hand out pamphlets and coloring books promoting non-belief.

Florida loses baby Jesus, but gains Flying Spaghetti Monster:  Florida was once again the scene of another Christian loss as the state’s Department of Management Services denied a request to put a nativity scene in the capitol rotunda, but did approve a Gay Pride Festivus pole made from beer cans, a 9-foot-tall menorah, and a shrine honoring the the decidedly non-secular Flying Spaghetti Monster.

Sarah Palin says she would rather vote for an atheist than a Muslim: It's religious intolerance at it's most Palin-esque, but devout and very vocal Christian Sarah Palin would mark the ballot for "No God" over "Wrong God."

Zombie Baby Jesus wins the Internet: Despite threats of daily $500 fines, an Ohio man went forward with his zombie nativity scene drawing attention from all over the world and making zombie Baby Jesus an Internet sensation.