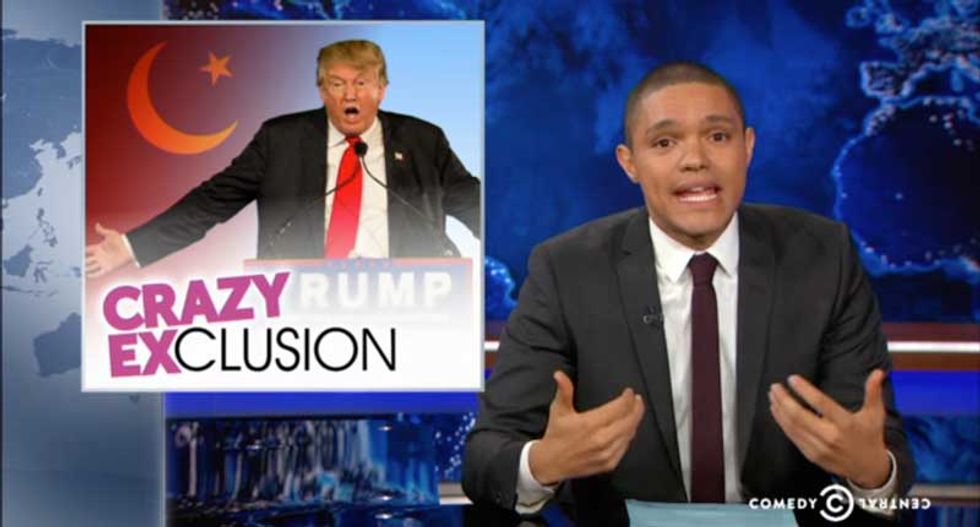 Daily Show host Trevor Noah came away from a discussion with correspondent Hasan Minhaj on Tuesday somewhat unsettled regarding Donald Trump's possible motivations for pushing a ban on Muslim immigration into the US.

"I think this is where the evidence points: Donald Trump is an extremist leader who came out of nowhere," Minhaj explained. "He's self-financed, recruits through social media, attracts his followers with a radical ideology to take over the world, and is actively trying to promote a war between Islam and the West."

When the host asked him how to combat the threat of "WHISIS," Minhaj was more candid.

"Where are all the moderate white conservatives?" said the correspondent. "I mean, come on. They've got a responsibility to step up and speak out against WHISIS, because I'm sick of this."

At the same time, though, Minhaj agreed with the real estate mogul that Muslims should stay out of the US -- but only because they are in danger.

"One third of a major political party in America is backing a racist maniac," he said. "This place is scary right now."

For his part, Noah slammed the proposal, calling it "flatly discriminatory."

"Like a Pokemon, Donald Trump has evolved into a more gruesome form of himself," Noah argued.

Watch Noah's discussion with Minhaj, as posted online on Tuesday, below.