Trevor Noah tries to keep up with Trump's insults and lies: 'He's confusing bullshit with the truth' 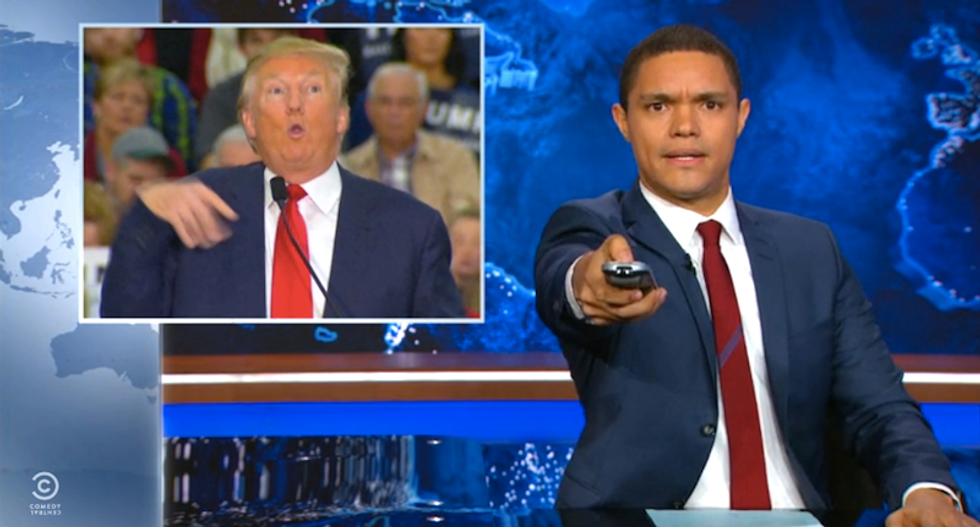 "The Daily Show" returned Monday night from a week off, and host Trevor Noah tried to catch up with Donald Trump's latest insults as if his presidential campaign were a reality TV show.

The real estate tycoon and reality TV star had a busy Thanksgiving holiday week, continuing to defend his suggestions that U.S. Muslims should be tracked in a database and his unsubstantiated claims that "thousands" of Muslims cheered 9/11 from Jersey City, New Jersey.

Noah played a clip of Trump cruelly mocking the physical disability of a New York Times reporter who knocked down the Republican frontrunner's claims about the Sept. 11, 2001, celebrations.

"Wait, what?" Noah asked, confused and holding a television remote. "How, who, what? What did I miss? I went to the wrong -- this is what I get for skipping episodes. Now I have to go back on my DVR and see how we got here."

Trump has used his fatuous claims about Muslims celebrating the terrorist attacks to justify the unconstitutional tracking followers of Islam as a security measure.

"I think Trump is confusing cheering with screaming," Noah said. "I also think he's confusing bullshit with the truth."

Trump has been unable to show any proof to back his claims, which have been disputed by both law enforcement and members of the news media -- including a physically disabled reporter who had written years ago that some suspected celebrants were detained.

That reporter, however, suggested that Trump had greatly exaggerated their numbers and actions.

"Trump started at Nazi Germany politics, worked his way through 9/11, all to reach his ultimate goal: mocking the handicapped," Noah said. "There's no coming back from this. In order to stand a chance, surely he'll have to apologize."

Nope. Instead, Trump demanded the reporter to stop using his physical disability to "grandstand."

"Man, I love this show," Noah said. "There's so may twists and turns. You think Trump will apologize, then he doesn't. And then it turns out the disabled journalist is the bad guy. No one saw that coming."