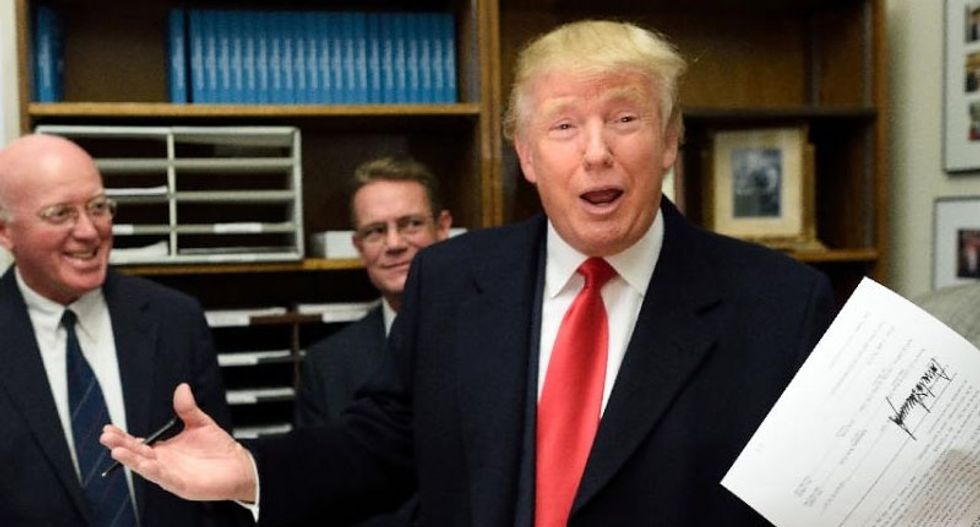 By Sabrina Siddiqui and Ben Jacobs

Donald Trump’s proposal to ban all Muslim immigration into the US, including that of tourists, was met with an immediate and massive backlash from across the political spectrum.

Republican presidential candidates moved quickly to condemn their party’s frontrunner, with Jeb Bush describing Trump as “unhinged” and Lindsey Graham calling on everyone seeking the presidency to denounce the plan. Even former vice-president Dick Cheney, as the Republican establishment began to chime in, told a conservative radio host the call “goes against everything we believe in."

“Donald Trump today took xenophobia and religious bigotry to a new level,” Graham told the Guardian in an interview shortly after Trump unveiled his proposal.

“His comments are hurting the war effort and putting our diplomats and soldiers serving in the Middle East at risk. The way to win this war is to reach to the vast majority of people in Islamic faith who reject Isil and provide them the capability to resist this ideology.”

New Jersey governor Chris Christie said Trump’s comments reflected “a ridiculous position and one that won’t even be productive”.

“We do not need to resort to that type of activity nor should we,” Christie told conservative radio show host Matt Medved. “We need to cooperate with peaceful Muslim Americans who want to give us intelligence against those who are radicalized.”

“To ban Muslims from entering the country is just someone who is speaking from no experience,” he added. “There are folks in this race that don’t care what the law says because they are used to firing people indiscriminately. You do not need to be banning Muslims from the country.”

Ohio governor John Kasich, one of the more vocal critics of Trump, was quick to reject his proposal.

“This is just more of the outrageous divisiveness that characterizes his every breath and another reason why he is entirely unsuited to lead the United States,” Kasich said.

Florida senator Marco Rubio was among the last of the presidential candidates to weigh in, but tweeted his disapproval of Trump’s plan.

“I disagree with Donald Trump’s latest proposal. His habit of making offensive and outlandish statements will not bring Americans together,” Rubio wrote. “The next President better be somebody who can unite our country to face the great challenges of the 21st Century.”

“It is time for Ted Cruz to quit hiding in the weeds and speak out against Donald Trump’s xenophobia and racial bigotry,” Graham said.

But Cruz and a handful of other Republican contenders were unwilling to denounce Trump.

Cruz, who is competing neck-and-neck with Trump in the early voting state of Iowa, said “that is not my policy” when a reporter raised the topic on the campaign trail.

Graham said Cruz’s response was insufficient.“It is time for Ted Cruz to quit hiding in the weeds and speak out against Donald Trump’s xenophobia and racial bigotry,” Graham said.

The presidential campaign of Kentucky senator Rand Paul initially declined to comment, then issued a statement that did not explicitly criticize Trump. Instead, it drew attention to Paul’s own legislation designed to block visitors from Muslim majority countries.

“Senator Rand Paul has led on the issue of border security, proposing real solutions. That’s why earlier this month he introduced legislation to block visitors and immigrants from nations with known radical elements while a new system is developed to screen properly,” campaign spokesman Sergio Gor wrote.

Ben Carson said everyone visiting the country should be registered and monitored during their stay, as is the policy of other countries. But the retired neurosurgeon, who said earlier this year that the US should not elect a Muslim president, did not embrace Trump’s plan. “We do not and would not advocate being selective on one’s religion,” Carson said.

.@realdonaldtrump removes all doubt: he is running for President as a fascist demagogue.
— Martin O'Malley (@Martin O'Malley)1449524334.0

This is reprehensible, prejudiced and divisive. @RealDonaldTrump, you don't get it. This makes us less safe. -H https://t.co/SjAqL0clHd
— Hillary Clinton (@Hillary Clinton)1449530052.0

Vermont senator Bernie Sanders also responded on Twitter, saying Trump and others “want us to hate all Muslims."

“The US is a strong nation when we stand together. We are weak when we allow racism and xenophobia to divide us. cc: @realDonaldTrump,” Sanders wrote. “Demagogues throughout our history have attempted to divide us based on race, gender, sexual orientation or country of origin.”

A top aide to Barack Obama said Trump’s proposal was “totally contrary to our values as Americans”.

“It’s also contrary to our security,” Ben Rhodes, the White House’s deputy national security advisor, said during an appearance on CNN. “We should be making it harder for Isil to portray this as a war between the United States and Islam, not easier.”