US and Cuba renew direct mail service after 52 years 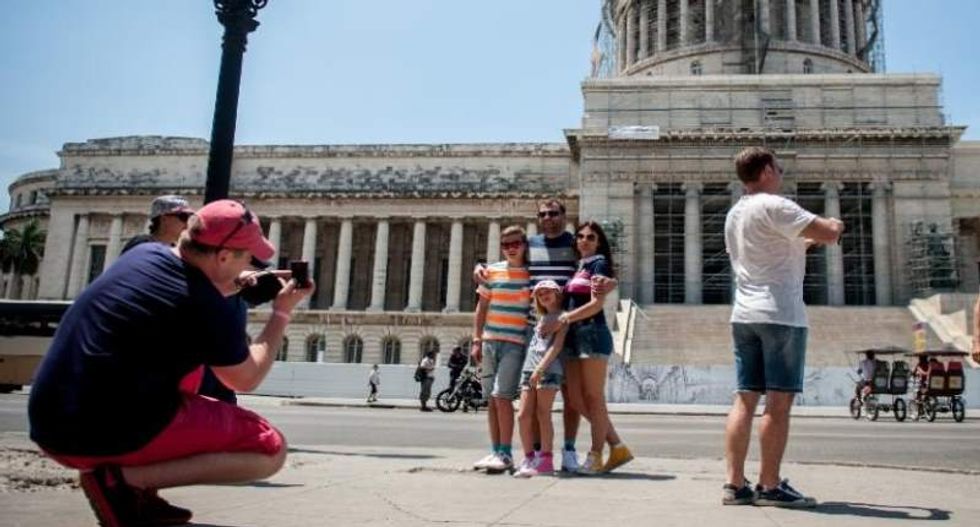 Tourists from the United States pose in front of the Capitol in Havana on April 6, 2015. (Photo by Yamil Lage for Agence France-Presse)

The United States and Cuba said Friday they have agreed to restore direct postal service 52 years after severing it at the height of the Cold War.

The pilot plan "will provide for mail flights between the two countries several times a week, rather than routing mail through a third country," the US State Department said in a statement.

It said details were still under discussion. The Cuban foreign ministry said the plan would take effect "in the coming weeks" and then be rolled out permanently.

The news comes six days from the first anniversary of the historic announcement by Presidents Barack Obama and Raul Castro that the two countries would renew diplomatic ties after more than half a century.

The two nations reopened embassies in each other's capitals in July.

The United States and Cuba broke off direct postal service in 1963, the year after Washington slapped a suffocating trade and financial embargo on Havana that exists to this day, despite Obama's calls for Congress to lift it.

Currently, letters and packages must pass through third countries, delaying delivery by up to a month.

The two countries had opened talks in 2009 on restoring postal service and direct flights.

Commercial airline service has still not restarted, although the large Cuban-American community and other US citizens with a special license can travel to Cuba on charter flights.

Dozens of such flights connect Miami and Havana each week.

The two countries have already re-established a direct telephone link since the thaw.

The Cuban state telecommunications company, ETECSA, has said the new phone connection could eventually be used for Internet communications as well.

Cuba has one of the lowest rates of Internet access in the world, with just 3.4 percent of households connected.

Several deeply divisive issues remain untouched in the ongoing talks between Washington and Havana, including the embargo and the future of the US naval base at Guantanamo Bay.

On Tuesday, they began discussions on one of the thorniest outstanding issues: compensation claims on both sides.

Washington is seeking payment of between $7 billion and $8 billion for American citizens and companies whose property on the Caribbean island was confiscated by Fidel Castro's government in the wake of the Cuban Revolution in 1959.

Havana for its part is seeking damages for its losses under the embargo -- an estimated $121 billion to date, according to the Cuban government.