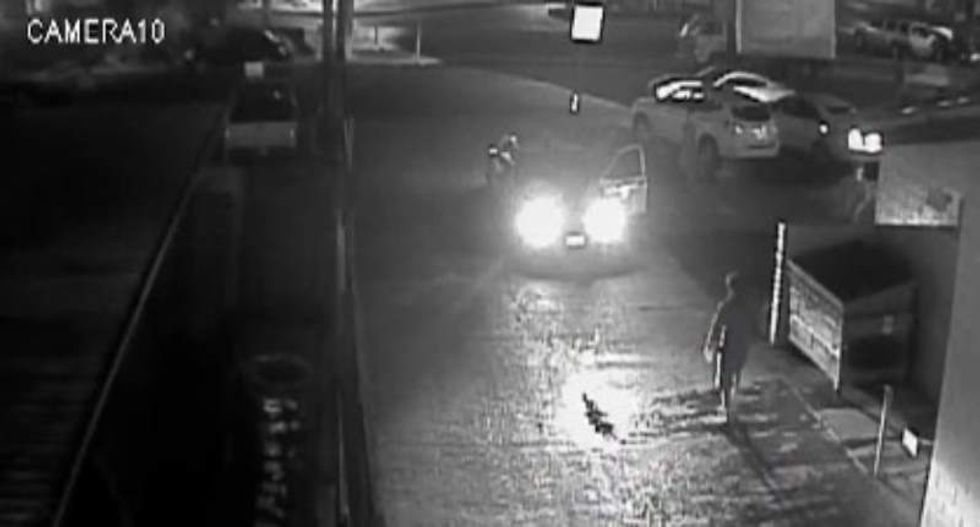 San Diego County District Attorney Bonnie Dumanis released footage on Tuesday of a local police officer fatally shooting a mentally-ill homeless man almost instantly upon spotting him, while defending her decision not to press charges in connection with the incident, KGTV-TV reported.

Warning: the video included with this story contains graphic footage.

The footage shows Officer Neal N. Browder firing at 42-year-old Fridoon Rawshan Nehad on April 30 while responding to a complaint that Nehad was threatening customers inside an adult bookstore with a knife. But the "knife" actually turned out to be a pen. Browder was wearing a body camera at the time of the shooting, but did not turn it on.

As the San Diego Union-Tribune reported, Dumanis released the surveillance footage a week after a federal judge lifted a protective order she obtained blocking media outlets from gaining access to it, and a month after she determined that Browder was not criminally liable in Nehad's death.

She also released audio of Browder's conversation with police dispatchers before the encounter, as well as security camera video showing Nehad inside the bookstore, saying that footage of the shooting alone would not put it in the proper context.

"The community should have the ability to weigh the video alongside other evidence that provides a more complete picture of what happened," she said during a 50-minute press conference.

Nehad's family filed a $20 million lawsuit against the city in May, as well as a federal civil rights lawsuit. The family has accused Police Chief Shelly Zimmerman of encouraging a "code of silence" and trying to cover up the shooting.

The family's attorney, Louis R. Miller, criticized Dumanis on Tuesday for what they called a one-sided display of evidence.

"She is trying to get ahead of the story," Miller said. "She must be very insecure of her decision not to prosecute to go to these extreme lengths to justify the shooting."

Nehad's family said that he was kidnapped by the Taliban after being drafted into the army of his native Afghanistan as a teenager, and lived in Germany for 14 years after his release before moving to San Diego to be with relatives. They also said that he suffered from manic episodes stemming from post-traumatic stress disorder, for which he was seeking treatment.

The officer can be heard talking to dispatchers in one of the seven videos released on Tuesday, asking, "OK, what's the guy wearing again?" before saying "OK, I got him in the alley" as Nehad walks into frame.

Browder is then seen getting out of his car and firing at Nehad, who is several feet away from him and his patrol car. Dumanis estimated the distance at around 17 feet.

Browder told investigators that Nehad refused to respond to orders to stop. The officer also said he feared for his life because Nehad was advancing on him.

Video of the shooting, as posted by KGTV, can be seen below.