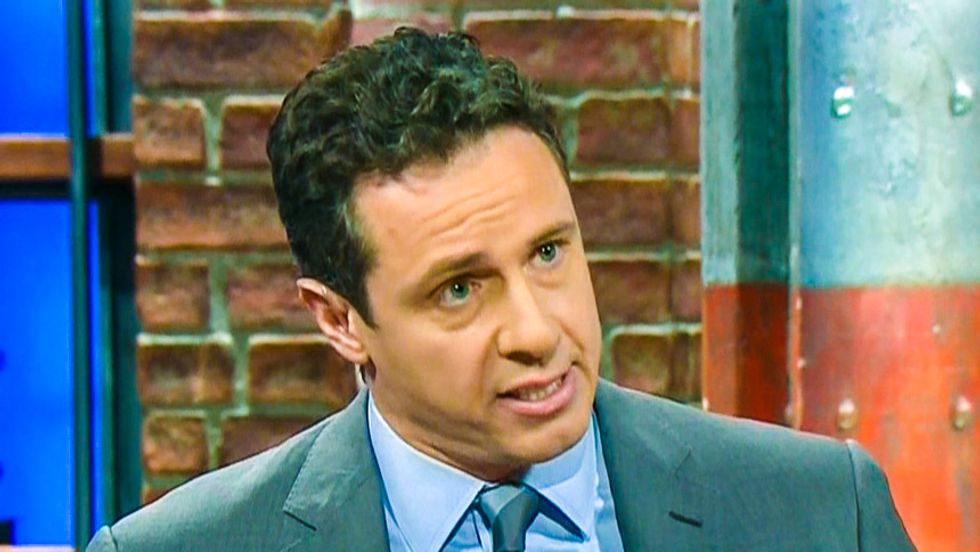 Donald Trump called in to CNN on Tuesday morning to defend his widely condemned proposal to ban Muslims -- even American citizens who are traveling abroad -- from entering the U.S. in the wake of recent terrorist attacks.

Chris Cuomo, host of the cable news network's "New Day," asked the Republican frontrunner point-blank if his proposal made him a "fascist."

"Well, I totally disagree," said Trump, apparently battling a cold. "You take a look, Chris, at what's going on, and it is disgraceful."

He said the backlash to his discriminatory and unconstitutional suggestion showed that too many Americans had "quickly" forgotten the Sept. 11, 2001, destruction of the World Trade Center.

"I have no doubt that we have no choice but to do exactly what I said until our country's representatives can figure out what the hell is going on," Trump said. "We have a problem in this country. You look at Paris, you look at the carnage that took place in Paris, but look at Paris beyond that. Paris is no longer the beautiful, gorgeous city with all -- Paris has a tremendous amount of problems. They have areas in Paris that have been radicalized, where the police refuse to go in and look at it."

Cuomo challenged the real estate tycoon and reality TV star to explain why the French had reached out to Muslims living in their country following last month's deadly attacks, while Trump's policies signaled Americans were "too afraid to be inclusive."

"No, I'm making us look strong, Chris," Trump countered. "Don't tell me about Paris -- Paris is under tremendous siege. They are absolutely in fear in Paris. Don't tell me Paris is not."

"What's even more disturbing, if you're looking into the future, other people knew what they were doing," Trump claimed. "There were pipe bombs laying all over the floor, they had other people that knew what was going on, Chris, and nobody reported it. They used the excuse they didn't want to be racial profilers, they wanted to be politically correct. By the way, the people that said, I think in their own way, they're guilty. The mother knew, the parents knew, everybody knew. Now even his father is under watch."

A neighbor has said he was suspicious of Farook and his wife but was reluctant to racially profile them, and investigators are trying to determine whether anyone else was aware of the couple's plans.

Cuomo said the U.S. security network had held up since 9/11, and he said part of that success was due to "national unity."

"I don't understand how you can see banning an entire religion as a way of saying anything other than, 'We are what ISIS says we are -- we want a war against Islam,'" Cuomo said.

He said his proposal was based on statistics promoted by the virulently anti-Muslim Center for Security Policy that showed 25 percent of Muslims living in the U.S. agreed that violence against Americans is justified.

Cuomo said those numbers were garbage promoted by a discredited conspiracy theorist, Frank Gaffney -- who nonetheless enjoys the support of Trump, Sen. Ted Cruz and Sarah Palin, among other prominent conservatives.

He then suggested that President Barack Obama was allowing only Syrian Muslims into the U.S., but not Christian refugees -- which isn't accurate.

"If you happen to be a Christian in Syria it's almost impossible to come into this country," Trump claimed. "If you're a Muslim, you can get it."

The candidate then bragged that he was continuing to lead the field in the GOP primaries.

"I think your poll data reflects a responsibility on you, Mr. Trump," Cuomo said. "People are listening to you, and America is great because it is united. Our diversity is our greatest strength."

Trump disagreed, and argued that he was leading in the polls because of his "common sense."