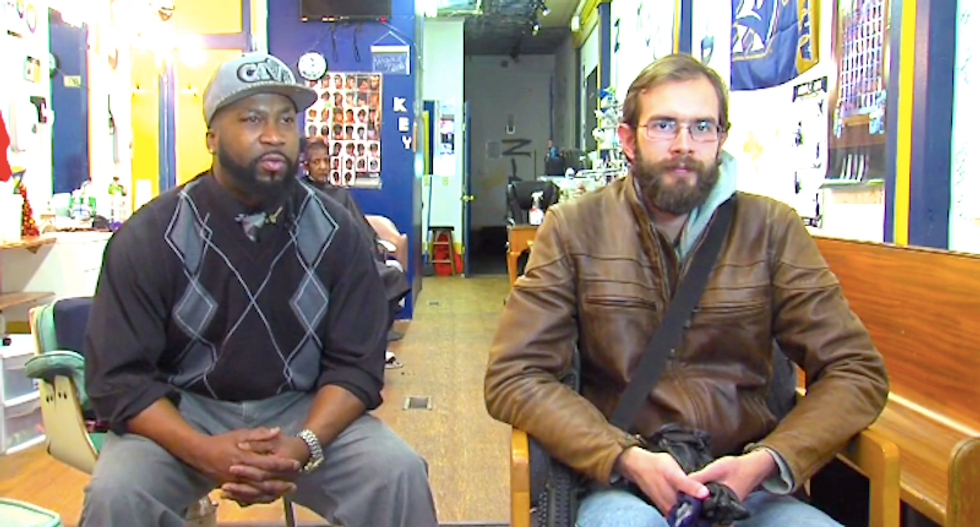 A white gun owner and a black barbershop owner sat down to discuss their differences after an angry confrontation that was captured last week in a viral video.

Daniel Kovacevic said he was just exercising his legs and his rights by strolling around a black neighborhood with a rifle strapped to his back and a pistol holstered to his belt -- but Deone Slater said the armed man made him nervous.

"He could have turned around and run loose like Rambo on the building," said Slater, who owns Kangaroo Kutz in Akron.

Ohio allows for the open carry of firearms, and both Kovacevic and legal experts said he broke no laws because he did not point either of his weapons at Slater or verbally threaten him.

“I walk up and down the street for exercise -- it just happens that I have guns with me,” Kovacevic said.

The 25-year-old Kovacevic has been stopped by police multiple times -- including a recent incident near the University of Akron -- after alarmed residents called authorities and posted photos of him walking around their mostly black neighborhood.

Slater admits he yelled profanities and challenged Kovacevic to a fight during their confrontation Thursday morning, but he said officers treated him as a greater threat than the armed white man.

“If it were me with a gun, they would have shut the whole block down," Slater said.

Kovacevic said little during the confrontation, but he asked Slater multiples times whether he was a Christian.

WEWS-TV arranged a meeting between Slater and Kovacevic to discuss their concerns.

“Why would you handicap the people that would bear weapons responsibly?” Kovacevic asked the barbershop owner.

Slater said he believed he was performing a public service by asking Kovacevic about his guns and his intentions -- particularly after a recent string of mass shootings.

"I seen that thing in California, and I was like, who is he? Is he with ISIS? What is going on?" Slater said. "This is crazy."

Slater said he was particularly concerned because his shop is across the street from a high school.

Kovacevic characterized himself as a participant in a larger political struggle between personal freedom and public safety.

"Are you willing to give up your freedom and live under a government that does not respect those rights in order to keep yourself safe?" Kovacevic said.

Cleveland police officers opened fire last year and fatally shot Tamir Rice, a 12-year-old black boy who alarmed witnesses with a toy gun, within seconds of spotting him at a park.

Also last year, two officers in Beavercreek gunned down 23-year-old John Crawford III within seconds of encountering him at a Wal-Mart store after another shopper reported him carrying what turned out to be a toy gun he had picked up in the store.

Neither officer was charged in Crawford's death, and Rice's family has criticized the Cuyahoga Prosecutor for releasing reports claiming the boy's fatal shooting was justified ahead of grand jury hearings to determine whether those officers should be charged.

The gun owner and barbershop owner shook hands and agreed to "continue communicating," the station reported -- but Kovacevic said he won't stop walking around with his guns.

“I believe that turning back is wrong and continuing forward is right," he said. "To turn around is not only cowardly but wrong."

The report did not indicate why Kovacevic chose that particular neighborhood for his armed strolls.