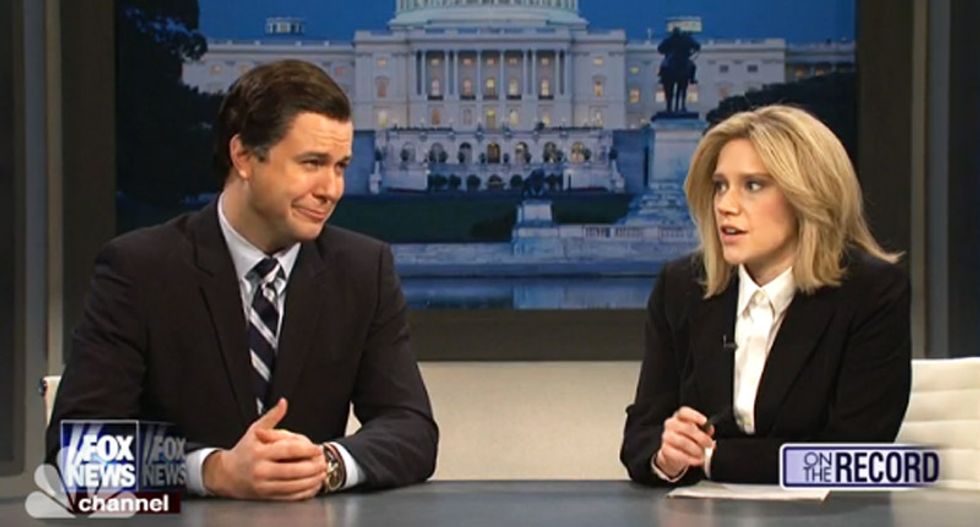 On SNL, Kate McKinnon did a turn as Fox News host Greta Van Susteren attempting to interview GOP candidates Ted Cruz, Chris Christie and Ben Carson -- only to be baffled and frustrated by their babbling and incoherent responses.

Castmate Taran Killam offered up a suitably smarmy Texas Senator Ted Cruz, who opened with, "Hello, Greta. A friend of mine wanted to say hello to you. I think you've heard of him. He's the U.S. Constitution," before giving her a condescending smirk.

Attempting to get Cruz to go on the record as to whether he agreed with Donald Trump's plan to ban Muslims from entering into the U.S., Cruz offered up, "Nyes."

"Nyes?" a puzzled Van Susteren questioned. "Is that a no or a yes?"

Cast member Bobby Moynihan portrayed New Jersey Gov. Chris Christie, saying of Trump, "Alright, look. This guy Trump is a clown, okay? He's a total joke! The last thing anyone wants is some loudmouthed bully from the Tri-State area who hurls insults at people like a fat-headed jabroni!"

Reprising his portrayal of a somnolent Ben Carson, cast member Jay Pharoah's Carson complained about his tumbling poll numbers after returning from the Middle East where he visited "Jordans" and met with both "Shiites and He-ites."

As Van Susteren shook her head and protested, Carson continued, "I talked to them all about radical groups. The hummus, ISIS, Is-Is, even Al Gator."