WATCH: Teen explains to classmates what it's like to be a Muslim after 7-year-old sister is called a terrorist 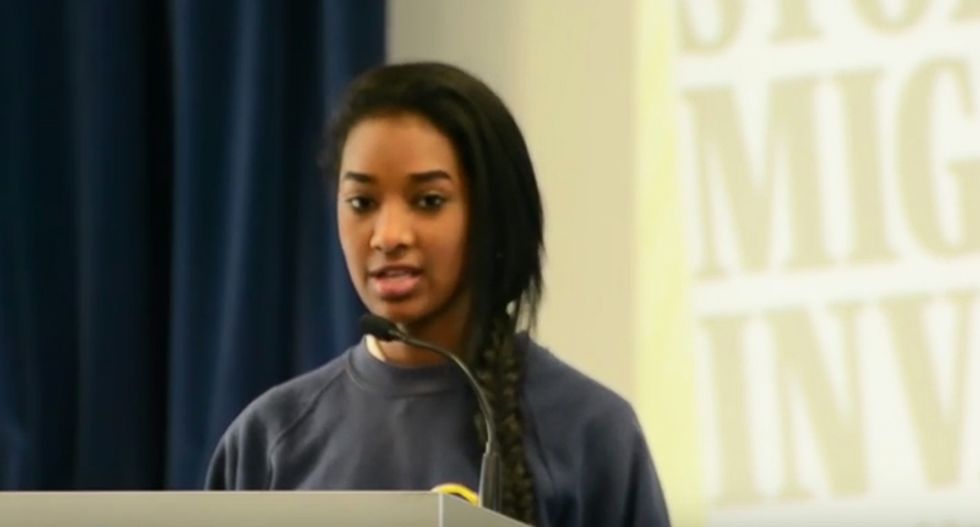 Speaking before her classmates at an assembly called to discuss Islamaphobia, a British schoolgirl explained what life has been like as Muslim following the terrorist attack in Paris by ISIS last month.

in the speech given by 15-year-old Isra Mohammed, at Kenton School in Newcastle, the teen relates how she her brother and her 7-year-old sister have been labeled terrorists solely due to their faith.

“People come to me telling me that because I am a Muslim, I am a terrorist, " Mohammed explained. "I have a seven-year-old sister who came home from school crying.  When I asked why, she said people in school were blaming her for the Paris attacks, she said that she didn’t want to go back. I have a brother in year seven, he got bullied as people were telling him your religion is killing people.”

Utilizing a slideshow behind her, Mohammed demonstrated how screaming tabloid headlines have fostered a hate campaign against Muslims, before elaborating for her classmates exactly what Islam stands for.

"Islam is a beautiful religion just like many others, she explained. "It's a religion of peace and mercy. As a Muslim, I use the word 'aslam alaikum' everyday of my life. It's a wish for the other person to be blessed with peace. This is what it means to be Muslim."

Mohammed went on to explain that by giving into hatred against Muslims, people are doing exactly what ISIS wants them to do.

"ISIS is a terrorist organization, they do nothing but cause harm and terror to the world, just like what happened in France. 129 lives were lost." she recalled. "But ISIS has one goal. They want countries like ours to reject Muslims. They'll be ecstatic and happy to hear that, since the events that happened in Paris, France, Muslims have been threatened and attacked in the U.K., America, Australia and all around the world."

"This evil organization have in their minds -- if they can get Muslims the enemy of the west -- then Muslims in France, America, the U.K. and Australia will have no one to turn to but to ISIS."

Mohammed then admonished her classmates, saying if they were using social media to "throw out masses of hate" towards Muslims, "You are helping ISIS. You are supporting ISIS. This is what they want. So think about it. Do you want to be the person helping a terrorist organization?"

Watch the video below, posted to YouTube by the Kenton School: