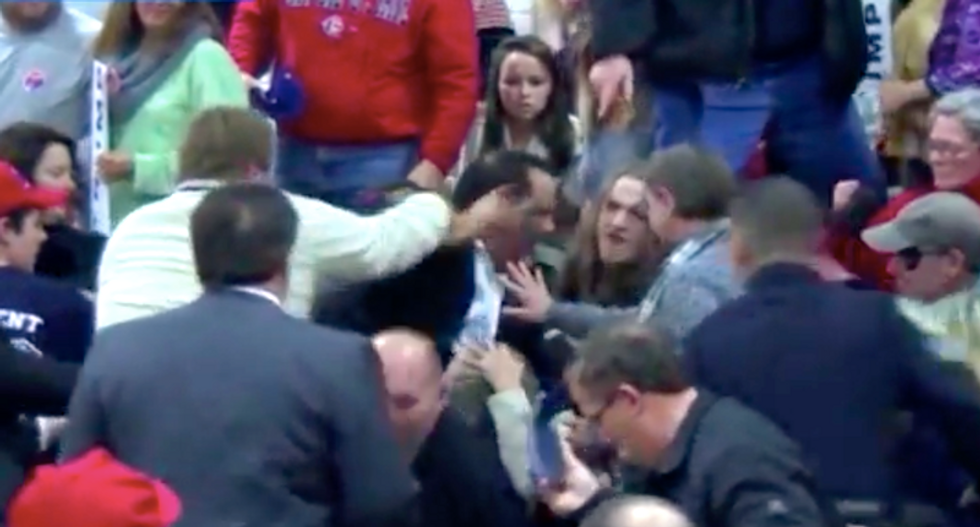 Another protester was violently ejected from a Donald Trump rally Monday night in New Hampshire -- this time by a self-described celebrity boxer.

A long-haired man shouted out "fascist" as the Republican frontrunner complained about the local Union-Leader newspaper had endorsed New Jersey Gov. Chris Christie over him, reported the Daily Mail.

A Trump supporter later identified as Todd 'The Punisher' Poulton, pounced on the man, and witnesses said they knocked over an elderly man in the scuffle.

The boxer, whose face is partially covered by a tattoo, slammed the unidentified protester onto the bleachers, and a police officer came to break up the fight before Poulton could land a punch.

The officer escorted two protesters from the building as Trump led the crowd in chanting "U.S.A."

Trump events have occasionally been marred by violence against protesters -- who the candidate blamed for instigating the attacks.

"The first couple of times, I was rough -- 'Get them out of here, I want him out of here' -- and the next day they said, 'Trump was brutal and horrible, he's a horrible human being,'" he complained. "The next time it happened, I said, 'Be nice, be really nice -- don't hurt them, please don't hurt them.' The next day they said, 'Trump is a much weaker person than we thought.' I can't win."

Watch video of the incident posted online by the Daily Mail: