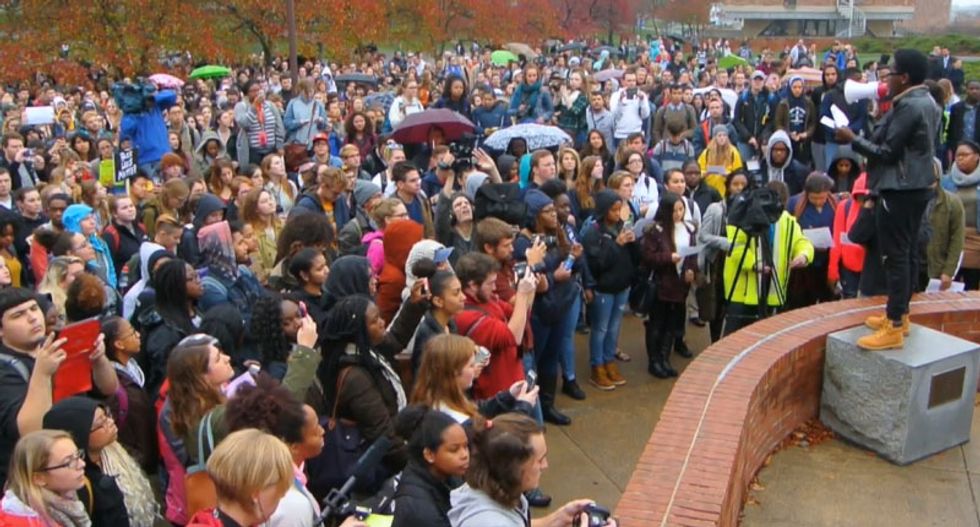 In a number of recent incidents across the country, black students have expressed how they continue to experience hostility because of their skin color. These students have spoken of their feelings of isolation and disempowerment.

Colleges and universities urgently need policies to address these challenges. One such existing policy includes the limited consideration of race in admission decisions. This policy allows institutions to build a racially and ethnically diverse student body.

This Wednesday, December 9, the US Supreme Court will consider the Fisher v University of Texas case. This will be the second time the court rules on the constitutionality of a race-sensitive post-secondary admissions policy at the University of Texas.

A decision that further restricts the consideration of race could potentially exacerbate the racial tensions that we are seeing around the nation.

Background to the case

In 2008, Abigail Fisher, a white female, applied to the University of Texas at Austin and was denied admission. She then sued the university on the grounds that the university’s race-conscious admissions policy violated the equal protection clause of the Fourteenth Amendment.

The case is now back before the Supreme Court.

In its 2013 decision, the Supreme Court had sent the case back to the lower court to conduct a more rigorous assessment of whether UT Austin needed to consider race in admissions to advance its interest in the educational benefits of diversity.

The Supreme Court was concerned that the lower court’s decision had relied primarily on the university’s judgment, without conducting an independent review.

The Abigail Fisher case on affirmative action is due to come up on December 9.

After reconsidering the case, the Fifth Circuit ruled that the university’s policy was necessary. Court rules, however, allow the parties to appeal the decision back to the Supreme Court, which Fisher did. In June 2015 the court agreed to hear the case again.

My research shows that limiting the use of race in higher education admissions policies can have harmful consequences for the diversity of the student body.

In an earlier research paper, my coauthor and I found that bans on race-sensitive admissions led to declines in racial and ethnic student body diversity in the field of medicine.

We examined the impact of bans in six states: California, Washington, Michigan, Nebraska, Florida and Texas and analyzed data from 19 years – 1993-2011. We found that following these bans, underrepresented students of color at public medical schools dropped from 18.5% to about 15.3%.

One of my prior studies also found declines across a number of important graduate fields of study, including engineering, the natural sciences and the social sciences. Other research too has documented declines in African-American and Latino enrollment at the most selective undergraduate schools in the fields of law and business.

How prohibitions on race-conscious policies can harm students

These declines in racial student body diversity can isolate and stigmatize students of color who are admitted and make it more difficult for institutions to create a welcoming campus environment for students of color.

In addition to leading to less diversity in the student body, barring the consideration of race in admissions can prevent institutions from addressing the ways in which race shapes the educational experiences of all students.

We might not think that admissions policies can have an influence on the work of administrators charged with supporting students of color once they are on campus, but findings from a more recent study suggest that the influence of these laws extend beyond the composition of the student body. Bans on affirmative action can have a detrimental influence on work that is critical to the success of students of color on campus.

For this study, my coauthor and I interviewed 14 campus-level administrators charged with implementing diversity policy at the University of Michigan, a flagship public institution representative of elite public schools in other states that have been affected by these laws.

We sought to understand how these administrators understood the influence of Proposal 2, a ballot initiative that banned race-sensitive admissions policies at public post-secondary institutions in Michigan in 2006.

Our interviews took place during 2011 and 2012, by which time Proposal 2 had been in implementation for five years. Consequently, the university had had time to respond to the law and to clarify any initial uncertainties regarding its legal requirements.

Students calling for diversity protest outside the US Supreme Court in Washington, DC.

How considerations of race can lead to social cohesion

By contrast, other research has found that race-sensitive admissions policies can signal to students of color that their diverse backgrounds are valued on campus.

Moreover, a friend-of-the-court brief in the Fisher case filed by 823 social scientists across the country, for which I served as counsel of record, summarized findings from other research demonstrating that classifications on the basis of race (such as what is involved in race-sensitive admissions) may be necessary to improve race relations. It also argued that race-sensitive admissions policies can help address issues about how race influences students' educational experiences.

This is because race operates not only at the structural level – shaping a child’s life chances, including his or her opportunity for a quality education – but also at the individual level.

Race influences thoughts and behavior of individuals of all races in subconscious ways – through implicit biases, such as attitudes toward particular social groups – and other psychological phenomena such as stereotype threat, classically manifested in high-stakes test performance, involving the threatening experience of conforming to negative race-based stereotypes present in the larger society.

Because race often shapes attitudes and behaviors subconsciously, not paying attention to race in admissions can further harm race relations. At the same time, permitting its consideration

can lead to social cohesion. Justice Anthony Kennedy, a decisive vote in the Fisher case, has acknowledged in past decisions how much race continues to matter.

This understanding, however, needs to reflect the ways in which race matters and also take into account the impact of the court’s decisions in a post-Ferguson, post-University of Missouri society.

Colleges and universities need all tools they can have at their disposal to improve race relations on their campuses.