Without evidence, Donald Trump accuses CA shooter's family of knowing about it in advance 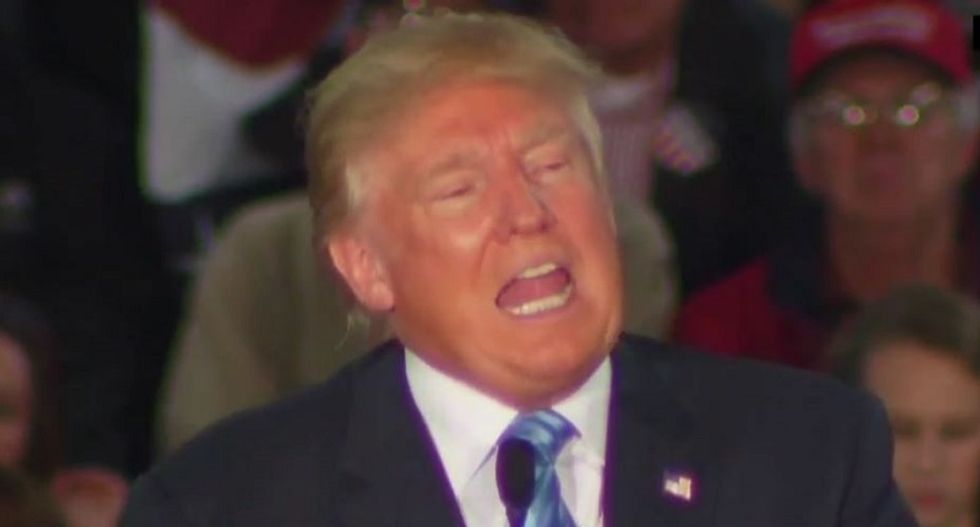 One week after GOP presidential candidate Donald Trump said one way to defeat terrorists is to kill their families, he gave a speech in Iowa accusing family members of San Bernardino shooter Syed Farook of knowing of his plans. Trump cited no evidence for this claim other than having a feeling about it.

The speech was given before an enthusiastic crowd in Davenport, with Trump speaking in a voice hoarse from laryngitis. He accused immediate relatives of Syed Farook, who was killed with his wife by police after gunning down 14 people and wounding 21 this week at a work holiday party, of knowing what Farook was going to do. None of Farook's family members have been named as suspects by authorities.

"The way the mother was in the apartment -- they've got all sorts of bombs, pipe bombs, all sorts of crap all over the apartment, the mother didn't know," Trump said sarcastically, before suggesting that the attackers weren't stopped beforehand because they weren't racially profiled by Democrats.

"I watched the sister of the guy last night on television," Trump continued. "And I'm pretty good at this stuff. I watched her, she had the veil, the whole thing. And she's talking about the brother... I thought she was lying so much. I'm good at this. I thought she was a total liar. She lied about him... She knew. A lot of other people knew too."

Trump recently said one way to fight terrorists is to "take out their families."

On Friday, MSNBC and other media outlets swarmed the home of Farook and his wife, Tashfeen Malik. The network showed the driver's license belonging to his mother, which contains her photograph and address, and her social security card. MSNBC later apologized for airing this footage.

Trump's speech prompted some to voice concerns for the safety of Farook's mother and sister. His family has expressed shock at the attack and has said they did not know he had become radicalized, nor that he had stockpiled weapons.

So Trump said yesterday that we need to exact retribution against terrorists and "take out their families" Today: https://t.co/jruTCyKO4Y
— digby (@digby)1449358535.0

@digby56 So will Trump be charged as an accessory when some wingnut inevitably attacks this woman?
— Wil Wheaton (@Wil Wheaton)1449358658.0

Watch Trump's speech, as posted to YouTube, here. His comments about Farook's family begin at about the 53-minute mark: