Woodrow Wilson's racism 'did some harm,' great-grandson admits -- but he opposes renaming building 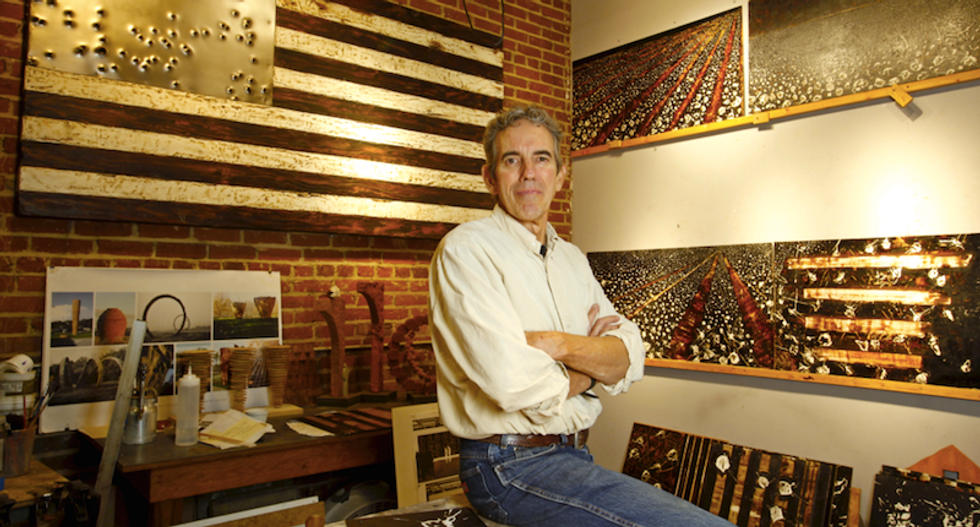 Thomas Sayre, the great grandson of U.S. President Woodrow Wilson, poses for a photograph in his studio near some of his artwork creations in Raleigh, North Carolina, December 1, 2015. (REUTERS/Jonathan Drake)

Woodrow Wilson made "mistakes along the issues of race," his great-grandson concedes, but he says heeding demands that Princeton University remove the former U.S. president's name from campus buildings would not heal current racial tensions.

A student group called Black Justice League has called on the Ivy League school to distance itself from Wilson, president of Princeton from 1902 to 1910, because of his support for racial segregation.

"Did he make mistakes along the issues of race? Yes, he did," said Thomas Hart Sayre, 65, whose grandmother Jessie was Wilson's daughter and gave birth in the White House to Sayre's father.

Wilson was a "product of his time and there was racism as much in the North as the South," Sayre, a sculptor with a studio in Raleigh, North Carolina, said in an interview on Tuesday.

Born in Virginia and raised in the South, Wilson was the governor of New Jersey when elected president in 1912.

He brought with him an administration loaded with white supremacists who segregated offices and removed black men from political appointments, according to Eric Yellin, whose book, "Racism in the Nation's Service," chronicles the rise and fall of African-American public servants. Wilson hosted a special White House screening of "The Birth of a Nation," a film that glorified the Ku Klux Klan and denigrated blacks.

U.S. college campuses have been roiled this year as minority students demand changes to address what they see as a range of injustices at the schools.

The University of Missouri's president was forced to step down last month over his perceived mishandling of racial incidents, while Harvard and Princeton said they would no longer use the traditional title of "master" for the heads of residential housing and colleges because of its association with slavery.

Princeton has pledged to consider the Black Justice League's demand that Wilson's name be erased from its campus because of his racist policies. That has pitted those who argue it is a step toward justice against those who argue that "whitewashing" history is unjust.

"He did a lot of good and he did some harm," his great-grandson said, adding that his progressive record on many issues should influence the way Wilson is remembered today on campus.

"The strategy of stripping names off buildings strikes me as ill-advised," Sayre said. "I find the kind of shrill demands that are made too often harm our ability or capacity to have dialogue, which I think is essential to healing things between us humans and moving forward."

Assani York, 20, a student at Princeton's Woodrow Wilson School of Public and International Affairs who helped organize the Black Justice League protests, said the goal is a "re-veneration" of Wilson on campus that allows Princeton to live up it its claim that it is a multi-ethnic, inclusive school.

"Don't say you are diverse and include minorities when you see several buildings on campus that are named after people who didn't even want those people here," York said in an interview on Wednesday. "We're saying remove his name and then figure out another way to commemorate him - the good and the bad."

Backing that appeal, the New York Times editorial board last week said Wilson's racist policies "are still felt in the country today" and therefore it is "imperative" that the school's board of trustees "not be bound by the forces of the status quo."

The newspaper also ran an opinion piece written by the grandson of John Abraham Davis, a black civil servant with a mid-level government job at the time Wilson took office as president in 1913. Davis was demoted under Wilson's segregationist policies and became "a broken man" by the end of the president's first term.

The Black Justice League, in an open letter released this week, demanded the university remove Wilson's name from campus buildings and "take responsibility for its history by formally recognizing Woodrow Wilson's racist legacy in perpetuity, either with a plaque or with a web page."

But the editorial board of the Daily Princetonian, the campus newspaper, this week opposed eliminating the Wilson name on campus.

The newspaper called him "a racist who espoused hateful views and rolled back the tides of racial equality" but added "his abhorrent view and acts do not erase his significant contributions."

Wilson College should keep its name and highlight both his accomplishments and "his many shortcomings," the newspaper said.

Wilson's great-grandson said that the widespread labeling of his ancestor as a racist as a result of the Princeton protests left him feeling torn but hopeful.

"It makes me feel for all of us foibled human beings who are capable of injustice," Sayre said. "But we also are capable of heroically trying to be just. I think Wilson was clearly both."