'A poisonous corrosive man': Watch this British MP bring the hammer down on Trump's 'violent ideology' 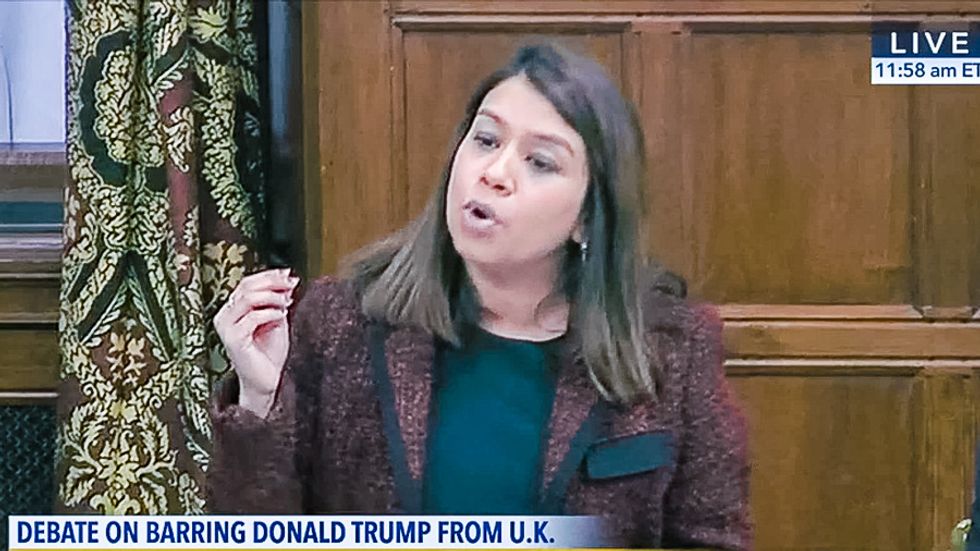 British Member of Parliament Tulip Siddiq urged her colleagues on Monday to support a ban on Republican presidential candidate Donald Trump, arguing that he would put Britons at risk by importing "violent ideology."

The British Parliament on Monday debated banning Trump over his anti-Muslim rhetoric after more than 570,000 Britons signed a petition calling for him to be barred from entering the U.K.

Although MPs who spoke all agreed that Trump's vitriol against immigrants had been out of bounds, most argued that banning him was not the best way to deal with the issue.

Siddiq, however, insisted that Trump would be endangering British Muslims if he was allowed into the country.

"This online petition signed by nearly 600,000 people shows that when people feel a sense of justice, when people feel we need to stop a poisonous corrosive man from entering our country, they will act in good conscience."

Siddiq pointed out that blogger Pam Geller had been banned from the U.K. in 2003 for her anti-Muslim views.

"The view of this female blogger who was stopped from coming into the country and Donald Trump's views that Muslims are all the same are strikingly similar," Siddiq observed. "If legislation is in the country, should it be applied equally to everyone or are we going to be making exceptions for billionaire politicians even when their words are clearly falling short of the Home Office guidance?"

The MP reminded her colleagues that Trump "ran a dog-whistle campaign against Barack Obama's birth certificate to find out whether the president of America was really American."

And she noted that Trump had called women "fat pigs, slobs, dogs, and disgusting animals."

According to Siddiq, British MPs had a reason to "worry about the safety" of Britons because there was evidence that Trump had incited violence against Muslims in the United States.

"I draw the line at freedom of speech when it actually imports violent ideology, which is what I feel is happening," Siddiq concluded. "The legislation is in place to protect the public and protect the people of Briton from individuals such as this."