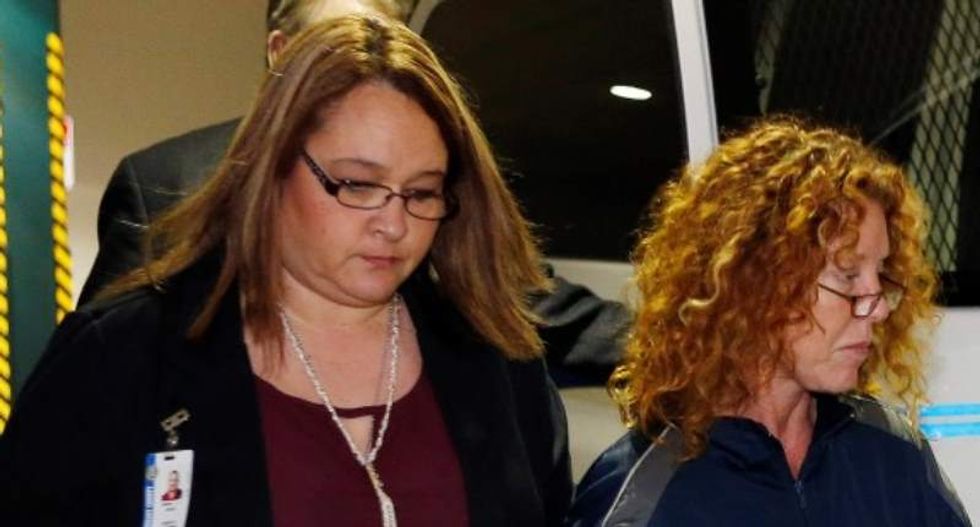 Tonya Couch (R) is escorted by a sheriff's deputy as she arrives at the Tarrant County Jail in Fort Worth, Texas, on Jan. 7, 2016. REUTERS/Paul Moseley/Ft. Worth Star-Telegram/Pool

The mother of a Texas teenager, derided for a defense of "affluenza" in his trial for killing four people while driving drunk, was flown on Thursday to Texas from California and charged with helping her son escape to Mexico after he was suspected of violating probation.

Tonya Couch, 48, could face up to 10 years in prison if convicted in Tarrant County on a third-degree felony charge of helping her son Ethan, 18, flee after he was suspected of violating a probation deal that kept him out of prison.

During his trial for the 2013 accident, a psychologist testified on Couch's behalf that he had "affluenza," meaning he had lost the ability to recognize right from wrong after being spoiled by his wealthy family. The diagnosis, which is not recognized by the American Psychiatric Association, was widely ridiculed.

Ethan was sentenced in Tarrant County to 10 years of drink- and drug-free probation, which critics saw as leniency because of his family's wealth.

Couch and her son left Texas after a video surfaced on social media in early December showing Ethan at an alcohol-fueled party. The video raised questions about whether he had violated his probation agreement, which was reached in juvenile court after the fatal accident.

Ethan Couch is in a Mexican immigration detention facility while he fights deportation, which could take months. His mother did not formally apply to stay in Mexico.

She was deported in late December and sent to Los Angeles where she was taken into custody. She will be held on a bond of $1 million in Tarrant County, officials said.

Live television footage from broadcaster WFAA showed Couch being led off a plane and placed in a sport utility vehicle.

She is due to be arraigned on Friday morning on a charge of hindering the apprehension of a fugitive, said Tarrant County Sheriff Dee Anderson, who met Couch at the airport.

"She was very quiet, very reserved, respectful and surprisingly, she was very appreciative," he said at a news conference.

Ethan faces about four months in Texas custody if he is found to have violated the terms of his probation. Tarrant County prosecutors said they were looking at additional charges that could keep him in custody longer.