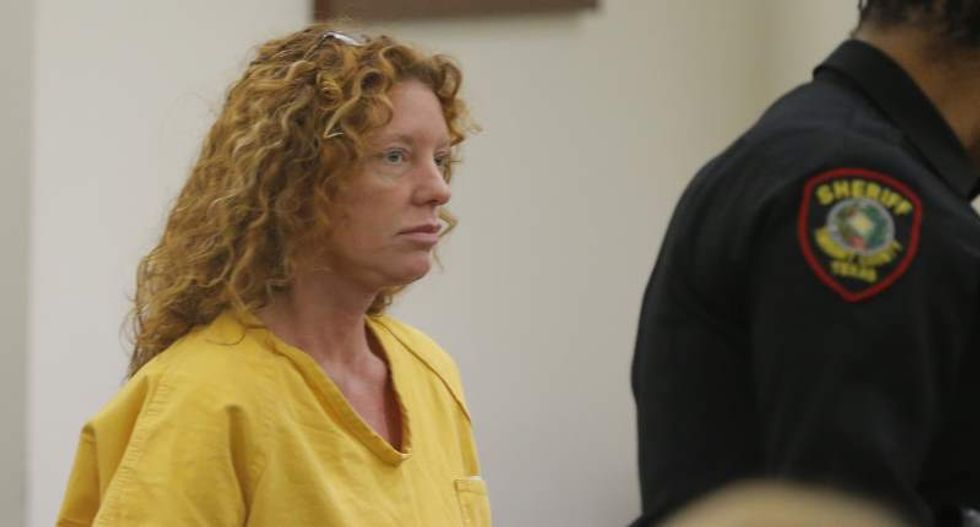 The mother of the Texas teenager ridiculed for his "affluenza" defense in the killing of four people while he was driving drunk, did not enter a plea at her arraignment in a Fort Worth court on Friday on a charge of helping her son flee to Mexico after he was suspected of violating probation.

Tonya Couch, 48, could face up to 10 years in prison if convicted of the charge, a third-degree felony, of aiding her son, Ethan, 18, after he was suspected of violating a deal that kept him out of prison.

The court on Monday is expected to consider a motion by her lawyers to reduce the $1 million bond that she is being held on. Her lawyers want $15,000.

The judge said if she is released on bond, she would be required to surrender her passport and wear a monitor on her ankle.

Couch, wearing a yellow jail jump suit, told the court she did not have a passport because it was not returned to her when she was deported from Mexico.

Couch is being held at a maximum security unit of the Tarrant County jail. She spent a restless night and complained about her accommodations, County Sheriff Dee Anderson told reporters at the court.

Couch's lawyers accused the sheriff of using the case to thrust himself into the spotlight as he seeks re-election, adding his escorting to jail of a suspect charged with a third-degree as excessive.

She arrived in Texas on Thursday from Los Angeles, where she had been held since being deported from Mexico at the end of December.

During Ethan Couch's trial for the 2013 accident, a psychologist testified that the teen, then 16, suffered from "affluenza," meaning he had lost the ability to recognize right from wrong after being spoiled by his wealthy family. The diagnosis, which is not recognized by the American Psychiatric Association, was widely ridiculed.

Ethan Couch was sentenced in Tarrant County to 10 years of drink- and drug-free probation, which critics saw as leniency because of his family's wealth.

Tonya Couch and her son left Texas after a video surfaced on social media in early December showing Ethan at an alcohol-fueled party.

Ethan Couch is in a Mexican immigration detention facility while he fights deportation, which could take months.