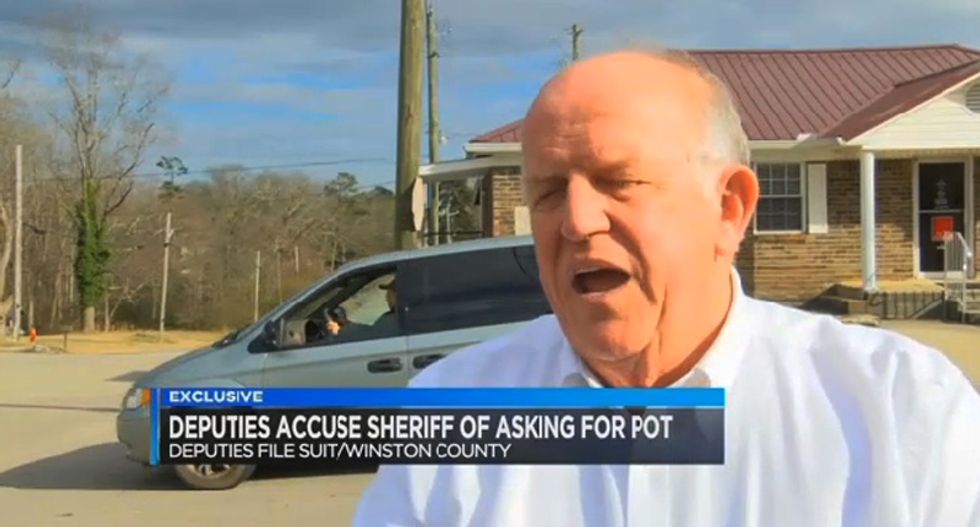 Two Alabama deputies are suing to get their jobs back after they claim the sheriff fired them because they wouldn't provide him with confiscated marijuana to give to his sick aunt, reports WBRC.

Former Winston county deputies Zak Green and Steven Moody claim in their lawsuit that they were dismissed after going to the local district attorney and stating that Sheriff Hobby Walker asked them to get him more weed after a bust. The two have provided state and FBI investigators with cellphone video of Walker asking them to "peel a little off" during their arrest.

According to former deputy Green, Walker took marijuana seized as evidence for his sick aunt during a meeting in May of 2015 and slid it into his desk drawer.

"I showed it to him and he slid it across the desk and put it in a drawer and told me, ‘Thank you,’ and I said, ‘No sir, I've got to have it for court.’" Green explained. "Then he proceeded to tell me, he said, ‘Well I need you to get me some.’ I said, ‘Like make more cases?’ and he said, ‘No, I need you to get me some, I've got somebody that needs it that's sick,’” Green said.

In audio recorded on a cellphone, the sheriff can be heard asking the officers to get some weed for his aunt, saying she is going to die soon from cancer.

"I need a little bit of dope, OK? I've been trying to get one ever since I've been in office and this has been going on eight months," Walker can be heard saying. "The woman's gonna die before I -- you know?"

The two deputies took their concerns to the local district attorney's office, only to see themselves dismissed in November with the sheriff alleging he was testing them.

“It's kind of embarrassing and it was very shocking at the same time," Moody said. "It was embarrassing for him to think I would stoop low enough to create a criminal act because of my position and then from there just dumbfounded to think a new sheriff was just testing his employee. What a way to test somebody."

In an interview with WBRC, Sheriff Walker refused to address the suit and on-going investigation, saying, "I'd rather you talk to my attorney about all this because if it goes to court or anything you know how that is."