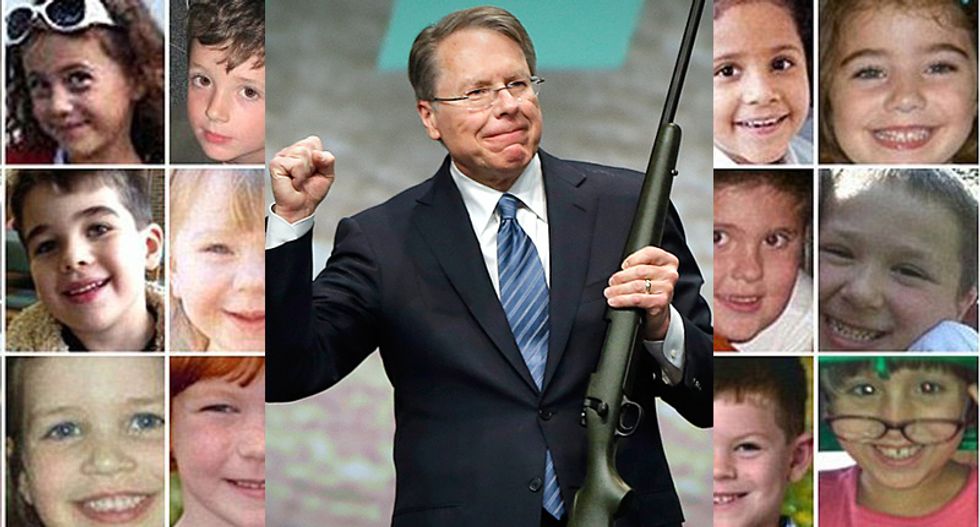 On Tuesday, President Barack Obama took one small step for slowing down the senseless slaughter of Americans, one giant leap for common sense.

By making it ever so slightly tougher for people to purchase unnecessary high-powered weaponry, Obama did exactly what the overwhelming majority of Americans favor.

According to a recent Quinnipiac poll, 89 percent of Americans think requiring background checks on gun purchases at gun shows or online is a hell of a good idea. In households where there are already guns, that number plummets down to ... 84 percent.

The reason for this is simple: we're sick and tired of gun deaths.

We're tired of weekend warriors strutting around Home Depot looking for toilet plungers while dressed like they're setting out on a midnight raid to capture Osama bin Laden; AR15 at the ready in case someone jumps the line at the self-check out.

We're tired of heavily-armed home-schooled Constitutional scholars who steal or occupy property belonging to all Americans because... freedom. They're not patriots, they're gun-packing thieves -- and not very bright ones at that.

But mainly we're tired of dying from gunshot wounds.

As of January 6 of this year, there have already been 157 deaths by gun violence --10 of them children under the age of 11 -- in the U.S. By the time you read this, that number will have grown.

Quite simply, it is too easy to buy a gun in America. It should not be as easy to walk into a sporting goods store and buy a machine designed to kill as it is to buy a bowling ball. And, just as being a bowler doesn't make you an athlete, purchasing a gun doesn't make you Chris Kyle: American Sniper.

You're just another doofus who increased the odds that someone in your household may have to make a late night run to the emergency room, or worse: call the coroner.

Despite what the bedwetters, the paranoids and the NRA-backed screamers say: no one is going to bust into American  homes and take away all the guns. Not because the Constitution  -- depending upon your interpretation --  forbids it, but because it would be impossible. But it is going to get tougher to buy a gun because an intractable NRA is losing the argument and the public is tired of being bullied by an organization that lost its way when it became a lobbying operation for weapons manufacturers.

After too many blood-soaked mass shooting "incidents" the NRA's failure to budge in the slightest way to prevent gun deaths has them edging towards Scientology-like pariah status-- and people are letting them know.

As Obama spoke on Tuesday, the NRA -- in a classic tone-deaf response -- used the word "funny" to describe his plans.

People were not amused.

@NRA Everything he said supports the 2nd Amendment. EVERYTHING. You are what's wrong with our country.
— ThisBarbara (@ThisBarbara)1452014736.0

@NRA - I know @POTUS used a lot of three dollar words, which made it hard for you to understand...but that's not what he said, or is doing.
— WhenRightIsWrong (@WhenRightIsWrong)1452014874.0

...and this always needs to be said:

I think we can all agree on that one.