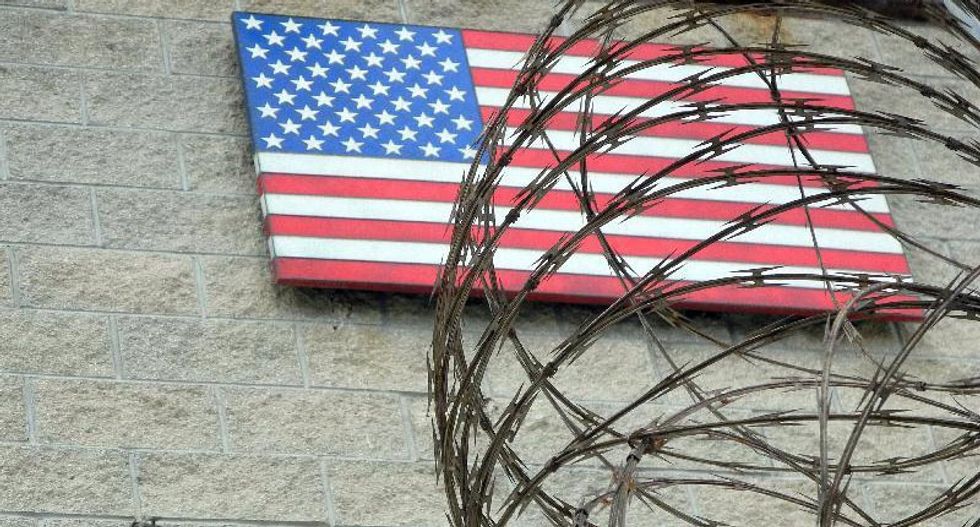 The US flag at the US Naval Base in Guantanamo Bay, Cuba, August 7, 2013 (AFP Photo/Chantal Valery)

The trickle of detainees leaving Guantanamo Bay continued Friday with the repatriation of a Kuwaiti man, as the general overseeing the military prison denied claims the Pentagon is stalling on shutting it down.

Faez Mohammed Ahmed Al-Kandari became the latest transfer, sent back to Kuwait after the United States determined he no longer posed a national security threat.

He had been held without trial in the Caribbean detention center since 2002, and his return to Kuwait now means the facility has a population of 104.

President Barack Obama pledged to shut Guantanamo when he took office in 2009, but his efforts have been repeatedly thwarted by Congress.

The facility, nestled out of sight on the US naval base on the southeastern tip of Cuba, became a hated emblem of America's "war on terror."

Critics said images of inmates who were clad in orange jumpsuits and held in cages, along with a lack of legal recourse, inflamed anti-American sentiment in the Middle East and was used as a jihadist propaganda tool.

In all, 45 of the remaining inmates have been approved for transfer, and the Pentagon is trying to find countries to take them. Many are from Yemen and cannot go back given the country's collapse into civil war.

US Defense Secretary Ashton Carter in December signed off on 17 of the 45 to be transferred as soon as this month, so officials say a further flurry of releases is expected in the coming weeks.

Even if all 45 are released, the remaining inmates are expected to stay in indefinite detention. These include the "9/11 Five," a group of five men accused of plotting the September 11, 2001 attacks that unfolded in New York, at the Pentagon and in the skies over Pennsylvania.

Obama wants the remaining men to be transferred to federal facilities in the United States and has asked the Pentagon to come up with proposals for a "Guantanamo North."

But delays, bureaucratic hurdles and political opposition mean it is increasingly likely the clock will tick down on his presidency before Guantanamo closes.

Opponents also point to some former inmates having returned to fight against US interests.

Recent media reports cited unnamed officials claiming the Pentagon is deliberately slowing the process through which the men cleared for transfer are released.

"The fact that there was reporting about (the Pentagon) in any way, shape or form slowing down or trying to impede the release of detainees from my perspective is complete nonsense," said General John Kelly, who is retiring as head of the US Southern Command and spent the past three years overseeing Guantanamo.

"It's an insult frankly," Kelly said.

In the case of Kandari, the Pentagon released virtually no information about the detainee, as is typically the case with Guantanamo inmates.

According to his leaked 2008 prison file, published by WikiLeaks and the New York Times, the 40-year-old was a "committed member" of Al-Qaeda and was an influential religious figure for the group's fighters in Afghanistan.

He was initially captured in December 2001 and sent to Guantanamo in May the following year.

On Wednesday, detainees Mahmud Umar Muhammad Bin Atef and Khalid Muhammad Salih al-Dhuby, both from Yemen, were transferred to Ghana.

Since 2002, a total of 779 detainees have been held at Guantanamo. Inmates are kept without recourse to the regular US legal processes and some likely will die in prison without ever being convicted of a crime.