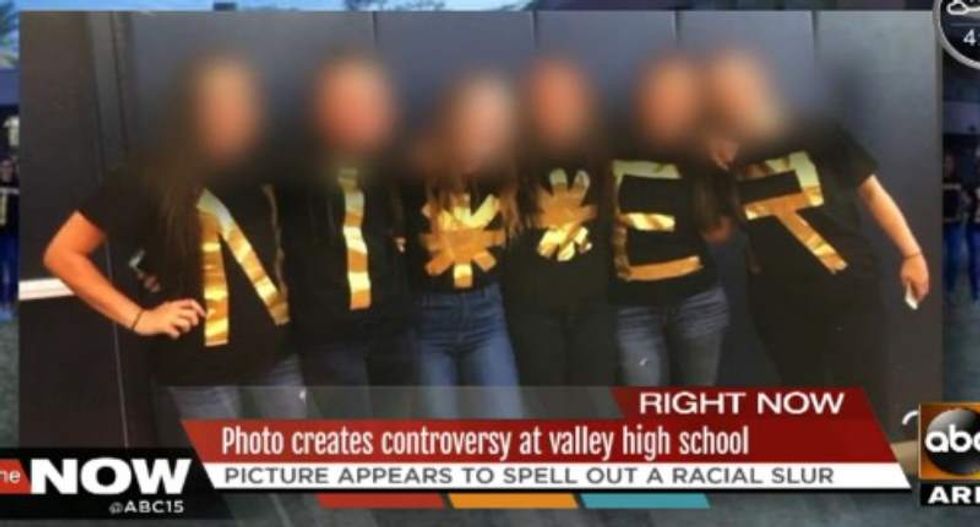 A group of students at Desert Vista High in Phoenix poses with shirts spelling out an anti-black slur. (KXNV-TV)

A group of Phoenix high school students' idea of a joke has instead increased tension around their school and brought them scorn from several black classmates, the Arizona Republic reported.

The six Desert Vista High School students sparked anger after posting a picture online with their shirts spelling out the word "NI**ER." The photo quickly spread online, sparking criticism from both students and administrators.

According to KXNV-TV, the students were part of a larger group that posed for a picture spelling the phrase "BEST*YOU'VE*EVER*SEEN*CLASS*OF*2016" on their shirts, and took the picture featuring the slur later.

A heavier police presence was seen around the school after the photo started spreading, and Principal Christine Barela, among other officials, sent parents a letter denouncing the students' actions.

"Those actions do not represent who we are as a campus," Barela wrote. "We can assure you we will discipline these students in accordance with district policy and our student handbook. While we don't discuss individual discipline, we can tell you that in addition, the obvious need for sensitivity training will be addressed."

But several classmates of color said the penalty was too light.

"To be honest, I felt they should've gotten expelled for what they did," Dejah Brightly told the Republic. "It's very, very offensive to all of the people at Desert Vista. I don't think they should have done it.

The Republic's report on reaction to the photo can be seen here.

And KXNV's report on the incident can be seen below.