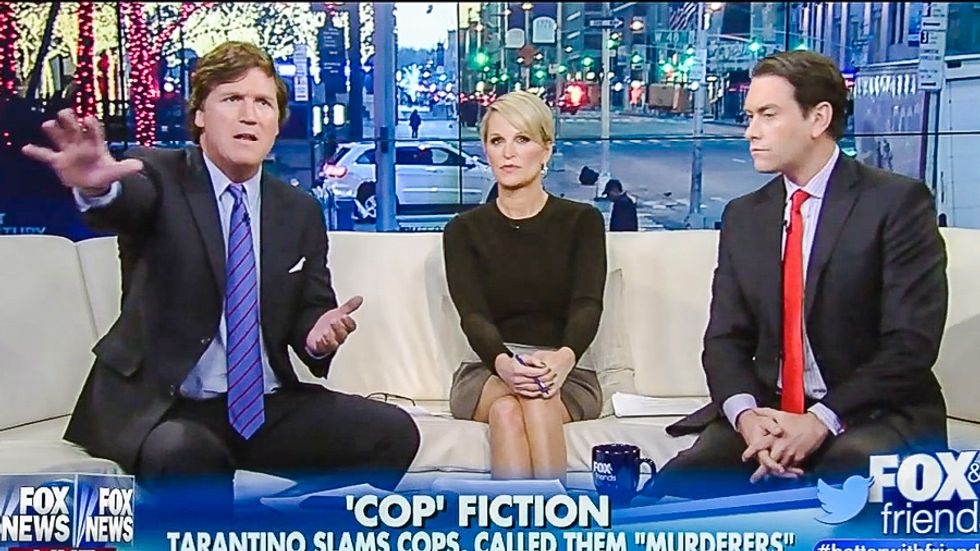 The host of Fox & Friends blasted film director Quentin Tarantino over the weekend for comparing the Confederate flag to the Nazi flag.

Although the Fox News morning show could only find about 15 seconds to cover the takeover of a federal building in Oregon by armed protesters, the show found time each hour to talk about Tarantino's opposition to the Confederate flag.

In an interview with the Telegraph, the filmmaker recalled how the Confederate flag became a hotly debated issue in 2015 while he was filming his latest movie, The Hateful Eight, which highlights racial tensions after the Civil War.

“As we were making it, as the events of the last year and a half just kept happening, the movie became more relevant than we ever could have imagined," he explained. "All of a sudden, people started talking about the Confederacy in America in a way they haven’t before. I mean, I’ve always felt the rebel flag was some American swastika."

On Sunday, Fox News host Tucker Carlson suggested that the filmmaker did not know enough about history to talk about the Confederate flag.

"I don't think he knows anything about the Confederacy," Carlson quipped. "I would be shocked if Quentin Tarantino could name three Civil War battles if his life depended on it."

"This is an attack by the elites on middle American culture," he continued. "Using the Confederacy and the battle flag and all that stuff, they're just symbols to them of what they believe is the backward culture between Malibu and Georgetown."

"It's like they look out and, man, everyone is in the Klan. You know, they eat pork rinds, they watch NASCAR, they're horrible."

Playing "devil's advocate," co-host Clayton Morris noted that there were similarities between the way that white supremacists had used both the Nazi and Confederate flags.

"This is coming from a guy who has so many violent movies," co-host Juliet Huddy interrupted.

Carlson insisted that he was not defending the Confederate flag because he was "against" declaring war on the federal government.

"I would say that [Tarantino] is not making a reasonable point here," Carlson opined. "He's making the point that the president always makes, that the real threat is middle America. They have too many guns, they're into this Christianity thing. They are opposed to abortion. They have all kinds of Medieval views that are a threat to America."

"It really is an attack on middle American culture."