Atheist's invocation cut off when she reminds Tenn. city council they shouldn't invoke God at meetings 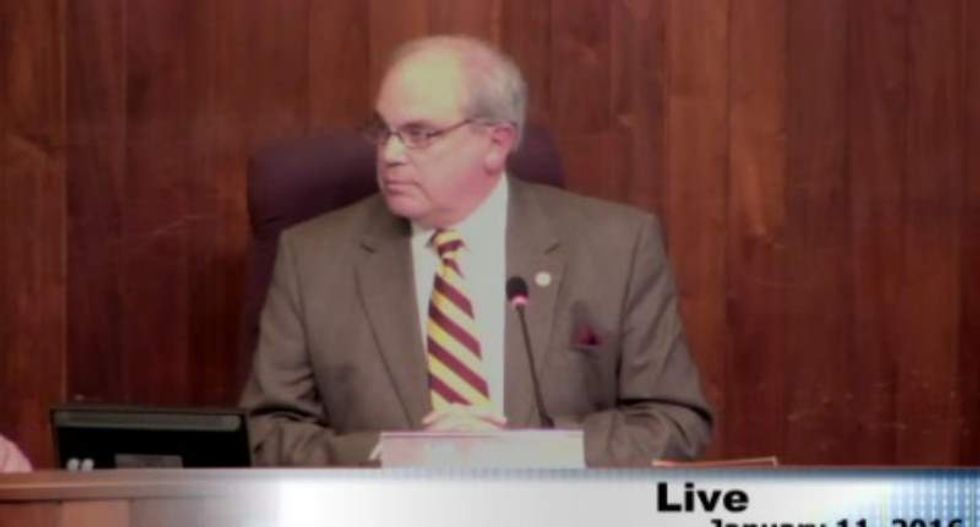 Oak Ridge, Tennesee Mayor Warren Gooch and some of his fellow city council members gave a harsh reception to an atheist who encouraged them to be more inclusive in her invocation at Monday's council meeting, the Knoxville News-Sentinel reported.

Footage from the meeting shows Gooch cutting Aleta Ledendecker off after she says, "The council is a civil body not a religious one, so [it] should recognize that secular authority in government is not only sufficient, but preferable."

City Manager Mark Watson later claimed that Ledendecker, a member of the Rationalists of East Tennessee, exceeded the three-minute limit on public comments. But a review of the video shows that she was cut off after two minutes and 23 seconds.

Ledendecker and her group have successfully petitioned to deliver invocations in two other communities in response to the Supreme Court ruling that secular groups be allowed equal opportunity to deliver them. Their invocation -- the same one Ledendecker delivered before being interrupted -- states that "no deities need to, nor should be invoked" to open council meetings, because doing so gives the appearance of religious preference running counter to the separation of church and state.

"Realize that [the community's] growing diversity encompasses not only many religions, but a growing contingent of those who have no religious affiliation, the 'nones,'" she said. "This community is made stronger by the diversity within it."

Two council members, Trina Baughn and Rick Chinn Jr., protested Ledendecker's appearance. Chinn can be seen in the video walking out in the middle of her remarks, while Baughn did not enter the council chambers until she was cut off.

"This was not an act of protest, but simply a choice to not participate in something that I believed might assail my beliefs," Baughn told Oak Ridge Today.