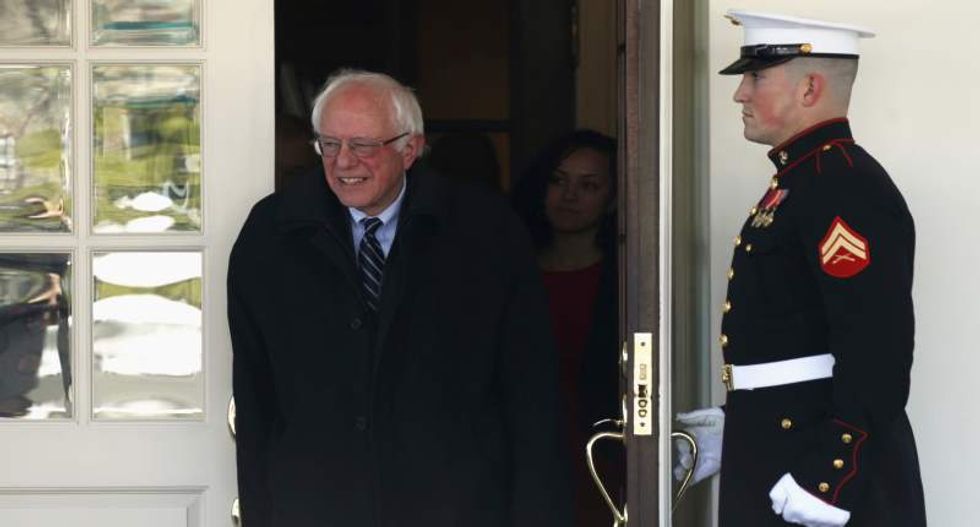 Democratic presidential candidate Bernie Sanders walks from the West Wing of the White House to speak to reporters after his meeting with U.S. President Barack Obama in Washington on Jan. 27, 2016. (Reuters/Kevin Lamarque)

U.S. Senator Bernie Sanders had a rare Oval Office meeting on Wednesday with President Barack Obama, days after Obama praised Hillary Clinton, Sanders' rival and front-runner in the race to be the Democratic presidential candidate in the Nov. 8 election.

Emerging from the White House after an hour, Sanders said the meeting was "constructive" and that Obama was trying to be as "even-handed" as possible in the race, dismissing commentary that Obama was favoring Clinton, his former secretary of state.

"I know there was some discussion the other day about a Politico interview, where he was tipping the scale toward Secretary Clinton - I don't believe that at all," the Vermont lawmaker told reporters on the White House driveway.

While Obama has not explicitly endorsed a candidate, he showered praise on Clinton's experience in the interview with Politico while noting that Sanders had the "luxury of being a complete long shot."

Obama suggested Sanders had not faced intense scrutiny and would need to broaden his populist message to go further in the race for the nomination.

The Sanders-Obama meeting came just before the first contests to pick the Democratic and Republican nominees: Iowa, on Monday, and New Hampshire, on Feb. 9. While Sanders has surged in recent opinion polls, Clinton still has the edge nationally.

Sanders said he received an overview of foreign policy issues from Obama and that the two talked "a little politics."

Asked whether Obama, who beat Clinton for the Democratic nomination in 2008, had given him advice on how to defeat her, Sanders laughed and said: "No, no."

Obama said he had a "good meeting" with Sanders and noted that he had previously met with Clinton during the campaign.

"The goal is to make sure that all the Democrats, or folks running in the Democratic primary, are focused on continuing the progress that we have made," Obama said in an interview with an NBC affiliate in Richmond, Virginia.

Obama and his aides have regular contact with Clinton and her staff, which includes former Obama White House staffers.

Clinton dropped by the White House for an informal lunch on Dec. 7 and had an hourlong chat in March.

The White House visitor logs show Sanders making only one previous solo visit with Obama in the Oval Office, on Dec. 15, 2014.

The White House said the meeting with Sanders had been in the works since Sanders asked Obama for some face time when he saw him a month ago at a holiday party for lawmakers.

Former Maryland Governor Martin O'Malley is a distant third in Democratic polls. White House spokesman Josh Earnest said he was unaware of any request from O'Malley to meet with Obama but that Obama would try to make time for him, if asked.