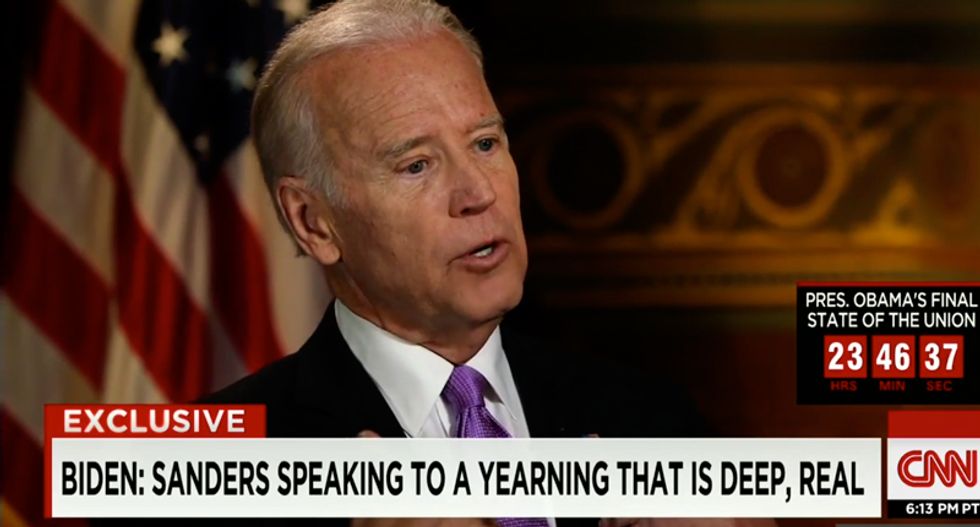 Biden said Sanders' attention to the growing gap between the very rich and other Americans has struck a chord with voters, with some opinion polls showing Sanders gaining ground.

"I'm not surprised that it is viewed as neck-and-neck," Biden said in an interview with CNN on Monday night.

"Bernie is speaking to a yearning that is deep and real, and he has credibility on it," Biden said. "And that is the absolute enormous concentration of wealth in a small group of people with the new class now being able to be shown being left out."

He added that Clinton, a former U.S. senator from New York and Obama's first secretary of state, has not focused on the issue as long.

"It's relatively new for Hillary to talk about that," Biden told CNN. "Hillary's focus has been other things up to now, and that's been Bernie's - no one questions Bernie's authenticity on those issues."

In a wide-ranging interview on the eve of President Barack Obama's State of the Union address on Tuesday night, Biden said he and Obama want to influence the presidential nominees in November's White House election, especially on gun control.

Asked if Sanders, whose positions on gun control have been criticized by Clinton as not being tough enough, was OK, Biden said, "Yes, he's OK. Look, Bernie's doing a - is doing a heck of a job. I think we have three great candidates out there," referring to a third candidate, former Maryland Governor Martin O'Malley.