Bill Maher mocks Oregon militants: How tough are they when they're asking for vanilla creamer? 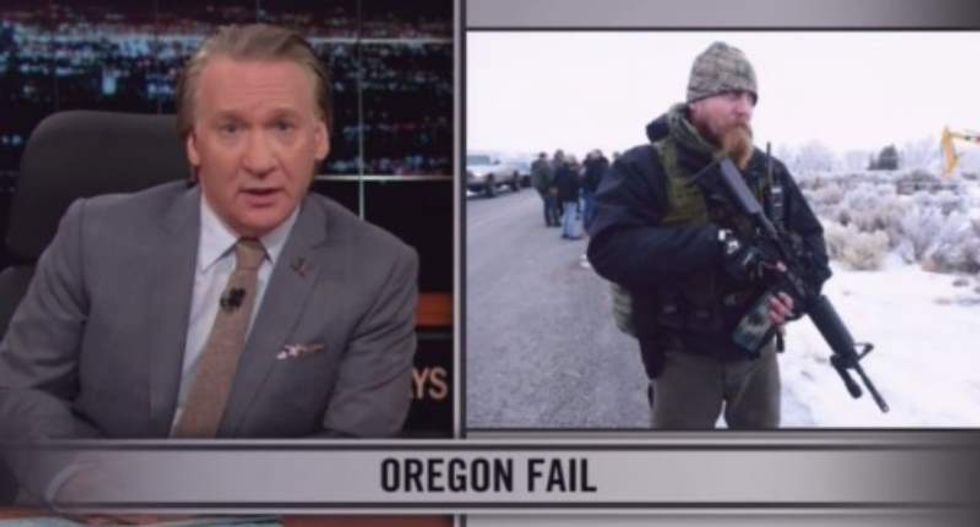 Bill Maher closed out Real Time on Friday by accusing the militants holed up in an Oregon federal reserve of not being as tough as they like to portray themselves.

"How tough can you rugged individualists be when the first thing you did after storming the rest stop was to post an appeal online for supplies -- a shopping list, really, that included such items as throw rugs, shampoo, foot warmers, and French vanilla coffee creamer. What, no scrunchies so you can braid each other's hair?"

If they were so "ready to die," the host chided, the country had plenty of wars available.

"You can go fight ISIS, 'cause what you're doing isn't saving the republic," he said. "It's more like when you're a kid and you run away from home by hiding in the backyard."

He singled out Arizona anti-Islam activist John Ritzheimer, playing footage from his heavily-derided "Daddy swore an oath" video and mocking him for going to such lengths to avoid his family for the holidays.

At the same time, however, he compared Ritzheimer to a Yale University student who loudly protested a school official's email suggesting that the college not discipline students who dress in culturally-appropriative costumes for Halloween.

"If it is a micro-aggression, shouldn't it just make you micro-angry?" Maher said of the Yale controversy, arguing that if she really wanted to protest oppressive outfits, she should start with Muslim burqas.

"It's interesting that this Yale student and this hammerhead in the woods think they're political opposites," he said. "Really they're the same person: martyrs without a cause, whipping themselves up into a lather for issues that would better be addressed with Xanax."