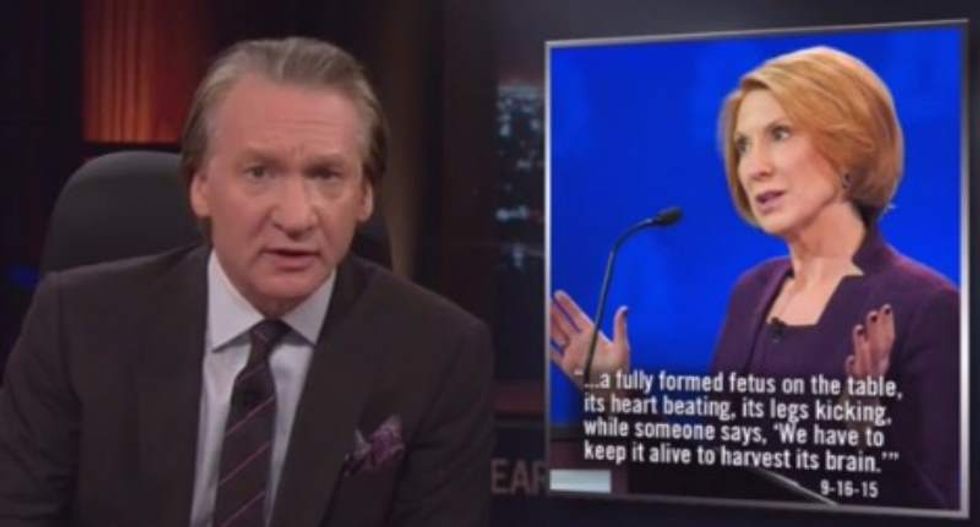 "In a very short time, Republicans have gone beyond even the 'zombie lie' to just making sh*t up," he marveled.

He singled out presidential candidate Carly Fiorina's insistence that she watched video showing Planned Parenthood officials discussing how to harvest the brain of a "fully-formed fetus on [a] table," a charge she has defended despite all evidence to the contrary proving her wrong.

"That video doesn't exist, unless you subscribe to Nutflix," Maher ranted.

Similarly, the host said, Donald Trump only doubled down when hit with the fact that there was no evidence to corroborate his claim that there were 10,000 Muslims "cheering" in New Jersey after the 9/11 attacks.

"He's like Pinocchio -- except when he tells a lie, his b*lls grow bigger," Maher said.

One reason conservatives have been able to get away with this kind of brazen lying, he argued, was that the Internet had deteriorated from the "information superhighway" to "bullsh*t boulevard," allowing more people to live their lives fact-free.

Conversely, Maher added, people who normally only had to confront their "right-wing uncle" at Thanksgiving now had to deal with them posting conspiracy theories on Facebook.

"That's what so great about Facebook: you're not telling lies, you're just sharing them," he said.