Bill O'Reilly shuts Rick Santorum down: We couldn't find a reason to have him on the show 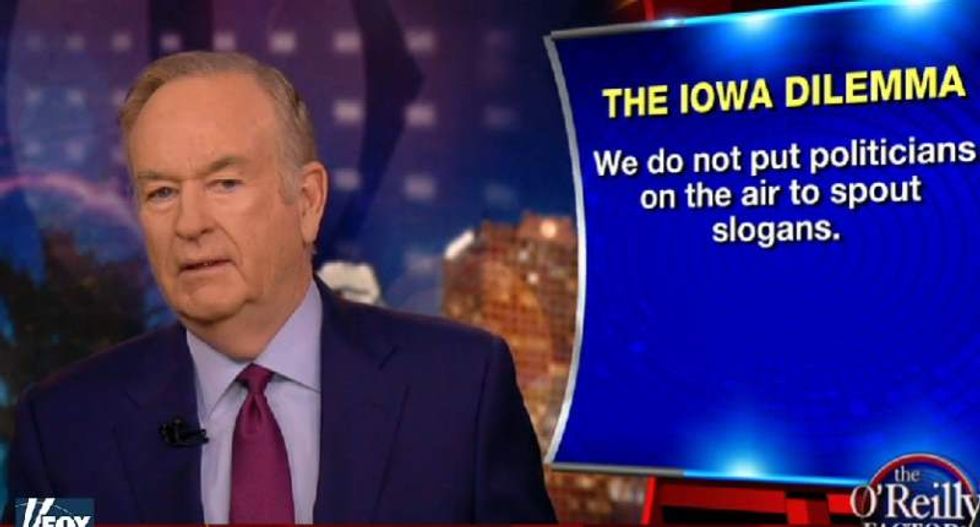 Fox News host Bill O'Reilly confirmed on Friday that his program has not offered Rick Santorum's presidential campaign any attention, but insisted there was a good reason for doing so.

"Honestly, we looked for a reason to put the senator on, but we couldn't find any," the Factor host said. "His poll numbers are very low. His campaign strategy is what it was four years ago. There is simply nothing new."

Santorum complained after a GOP debate on Thursday night that neither O'Reilly nor his colleague Megyn Kelly have invited him onto their programs despite announcing his candidacy last May.

"They won't put me on the show. And this is a guy that won the Iowa caucuses four years ago, and when you look at their biggest primetime shows, we haven’t had access to their shows," Santorum told Breitbart News.

O'Reilly did not dispute the candidate's argument, saying, "I feel Rick Santorum's pain," and saying that voters "could do worse" in choosing him. At the same time, he added that his show was "not in the campaigning business."

"We don't put politicians on the air simply to spout their slogans," O'Reilly argued. "That's what political ads are for. We cover the news. And when a politician is in the news, they get on the program."

That was the reason, he said, why Donald Trump has received more coverage than Santorum and other candidates.

"He is dominating the news cycle by injecting controversy into the political arena. And you know what? That's not fair," O'Reilly said. "Other candidates are being left out. Like Rick Santorum."

Watch O'Reilly's commentary, as posted by Media Matters on Friday, below.