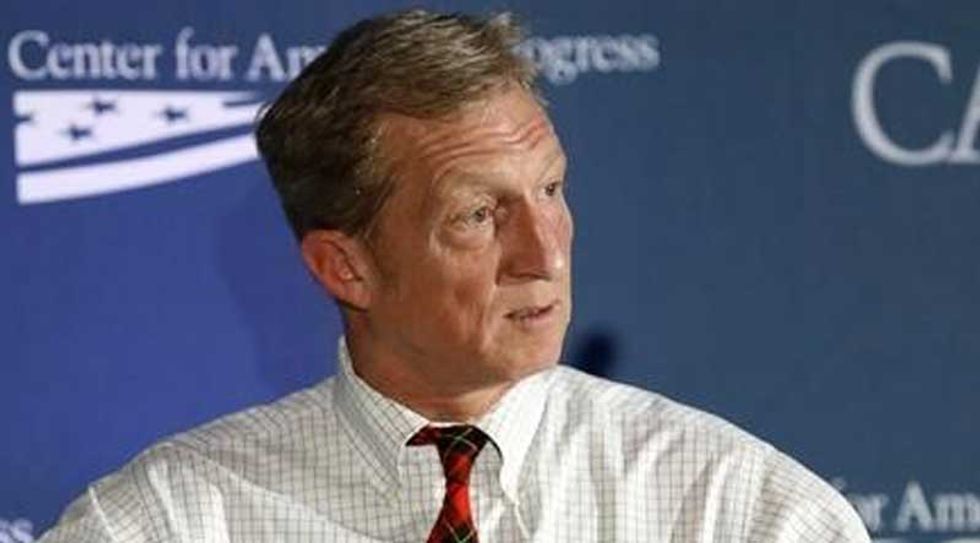 Billionaire environmental activist Tom Steyer said he is not yet prepared to back Hillary Clinton as the Democratic nominee for president and he would not rule out supporting her main rival, Bernie Sanders, if he beats her in the primaries.

One of the biggest Democratic donors, Steyer could help Clinton boost her standing among environmentalist activists who are a key constituency within the Democratic party. Clinton is locked in tight races with Sanders in Iowa and New Hampshire, which both have early nominating contests.

"Our real goal has been not to support any one candidate, but to emphasize and highlight the issue (of climate change) so that the candidates can lay out their solutions and so the American people can have a chance to make a decision," Steyer said in a telephone interview on Tuesday.

After the Democratic party picks its presidential nominee, that will change.

"We have always come out and supported the climate champion," Steyer said. "The idea that for some reason we wouldn’t do that, I’d have to understand why in hell we didn’t. Because that has been our practice always."

Steyer, 58, made his fortune through investments, some in fossil fuel energy, at Farallon Capital Management, the San Francisco-based hedge fund he founded in 1986.

He stepped down as co-managing partner of Farallon in 2012 to devote himself to full-time activism because, as he later wrote, he "no longer felt comfortable being at a firm that was invested in every single sector of the global economy, including tar sands and oil."

He spent heavily in the 2014 congressional elections to back candidates who could help further his anti-fossil fuel agenda. He paid out over $70 million, more than any other single donor in both parties. Of the seven candidates he supported, three won.

Steyer said the 2016 election was critical to consolidating gains for the climate movement in 2015 - a year in which the Obama administration signed onto a global climate pact, blocked the Keystone XL oil sands pipeline from Canada, and ushered in new curbs on oil drilling and air pollution.

"If you look at the Republicans, there are a whole bunch of serious Republican candidates who are diametrically opposed to everything the president has spoken about in terms of progressive energy and climate policies. So when you think about what is at stake: almost everything," he said.

Steyer said Clinton's position on energy and climate - which calls for increased use of solar and wind power, lower oil use, and a revamping of the aging U.S. oil and gas pipeline network - was good but needed some work. (https://www.hillaryclinton.com/briefing/factsheets/2015/09/23/hillary-clinton-vision-for-modernizing-energy-infrastructure/)

"I don’t think she’s fully fleshed out everything she has to say about energy and climate," Steyer said. "I think that as the campaign goes on I would imagine she will put out more detailed plans of exactly what she thinks. I don't find what she's said inadequate, but I don't think it's complete yet."

Sanders has a climate agenda that on its face appears to resonate more closely with Steyer's - an aggressive move away from fossil fuels, including a ban on hydraulic fracturing. But he has also railed against billionaire influence in politics and has pledged not to accept cash from big donors. (https://berniesanders.com/issues/climate-change/)

Steyer said Sanders' views on big money "certainly wouldn’t disqualify him for us, I can tell you that."

"What Bernie Sanders is talking about, which is trying to get back to a more perfect democracy, is something that we support too. We just think that the idea of ... wishing the rules were different and then pretending they were, is something which, unfortunately, probably would be disastrous from the standpoint of energy and climate," Steyer said.

Steyer says he has learned the lessons of the 2014 campaign, when he spent a lot of money in return for relatively little.

"When you look at 2014, it was a question of turnout. Americans turned out, and specifically Democrats, turned out in the lowest level they’ve done for 70 years. You’d have to go back to 1942 to see turnout that low. And in young people, the numbers are incredibly low. So the question is, how are we going to motivate those voters to show up?" he said.

His environmental organization NextGen Climate is running information campaigns on college campuses in Iowa and New Hampshire and elsewhere in an effort to raise awareness about climate change and the positions of all the presidential candidates.

Steyer hopes the effort will reach people of 35 and under, a group he says represents about a third of the country’s electorate and who generally agree that climate change is a problem, but who often pass up the chance to vote.

"We’ve been pushing really hard to get them involved to make them aware of what’s at stake," he said.

Steyer said he was not sure yet how much money the 2016 effort would cost, but acknowledged the project would likely be larger than the one NextGen undertook in 2014.

"We never have a budget. We know this stuff changes. What we do will depend on what happens."