Black comedians on Bill Cosby: 'Your hero is evil. It hurts but it's true.' 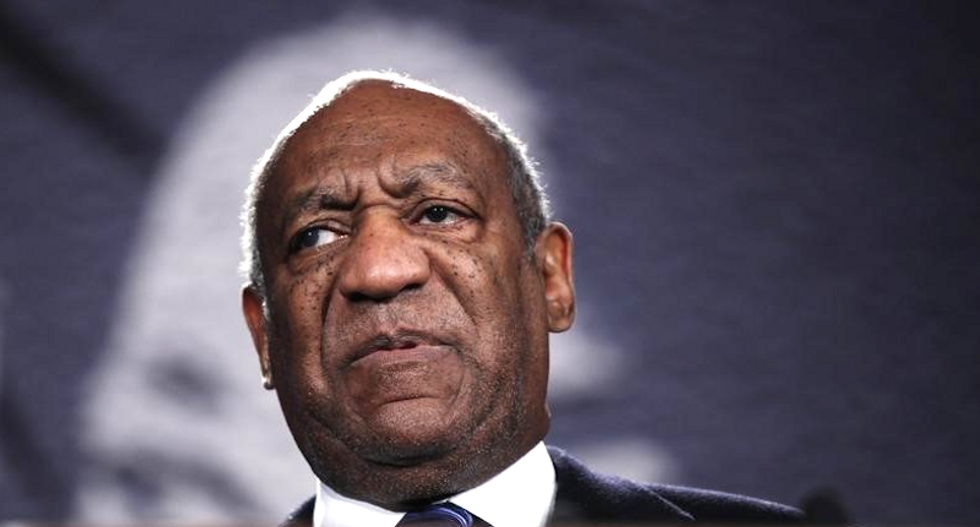 Charges against Bill Cosby for aggravated indecent assault, which his legal team tried to have dismissed on Monday, have reignited a debate not just about the comedian's guilt or innocence but about the role of race and racism. While many former defenders have defected over mounting allegations and revelations from an unsealed deposition, some of the people who continue to champion Cosby are framing it as the latest example of a racist criminal justice system which punishes Black men for doing things that white men get away with. Rapper Waka Flocka tweeted that he think's the someone is "framing" Cosby, through "an organized lie," and "propaganda." He also tweeted that, "Every time a famous minority make it they throw salt in the game." Rapper The Game took to Instagram, where posted an blank white image with the word Black and commented,

"I think it's crazy that Bill Cosby has a mugshot for alleged assaults 11 years ago with no physical evidence or proof besides these womens accounts of what he did to them an entire decade later.... But Darren Wilson, who killed Mike Brown on camera... George Zimmerman, who killed Trayvon Martin... Timothy Loehman, who killed Tamir Rice seconds after arriving on the scene.. on camera, is FREE... Why did it take these women over 10 years to bring this to the light ?- The Game #BlackLivesSplatter

Comedian Eddie Griffin, for example, said, “There is a systematic effort to destroy every black male entertainer’s image.... They want us all to have an asterisk by our name. Kobe, raped a white woman in Colorado. Dr. Cosby, raped 37 bitches and counting. Nobody leaves this business clean."

Of course several Black comedians like Larry Wilmore and Franchesca Ramsey have condemned Cosby and spoken about the intsection of rape culture and racism. And it was Hannibal Buress, who used his own standup to point out Cosby’s hypocrisy—telling young Black men to pull their pants up, while being a rapist-- that propelled the Cosby story into our national dialogue.

In order to further explore how Black comedians were navigating this issue, I spoke to Rae Sanni and Tarik Daniels on my radio show. Sanni told us, "There's a lot of people who bring up Woody Allen or Roman Polanski when you talk about Bill Cosby and say this guy got away with rape,” she said. “That is uninteresting to me because the idea that equality is everybody getting away with rape is silly." For Sanni, "people like Eddie Griffin, who attribute accusations against Cosby to "an attempt at the destruction of the Black man,  are the kind of people that think that Black liberation doesn't necessarily include Black women. Because if you think that the way to Black liberation is to allow the abuse of one half of the population, then you don't believe in Black liberation at all. You actually just want the access to patriarchy that white males have access to."

The Cosby accusations did not represent a “big loss” for Sanni. “I was never married to this idea as Bill Cosby as my dad. I'm a little young for The Cosby Show, so the Cosby Show didn't shape my childhood to the extent that it did other people." But, Sanni added, "you can intellectually acknowledge that someone has been culturally important without... losing all sense of reality. He's a person just like everybody else. And, we know quite a few people are rapists so there's no reason why this person couldn't possibly be."

Comedian Tarik Daniels acknowledged Cosby as a huge cultural and personal influence and was devastated by the allegations against the comedian: "I loved him growing him. I loved the Cosby Show, I loved the standup." In 2008 Daniels went to the opening of a boutique owned by Cosby's daughter, where he met the comedian and thanked him for inspiring him not only to pursue comedy but to attend college:

My friend and I went hoping he'd be there, and he was there, smack in the middle of the room with sunglasses on like he was a king on the throne. And he'd stop, smile with people, take photos. I was so scared of him because he was such a grumpy old man, that persona, but i still loved him and was really excited. So he saw me hiding from him and he told me to come over. He was like, "Why you sitting in the corner, why you hiding from me? A Black man's about to be President of the United States. We do not have to hide anymore." And I was like, "Wow Mr. Cosby. I love you, I'm a fan, you inspired me to go to college." He asked what school I went to, we had small talk, we took a photo. I cherished that photo until now.

Daniels took that photo and wrote the words, "Your hero is evil. It hurts but it's true," on top of it. This was after seeing "so many people, so many friends and family say horrible things about the women accusing him. And I have three sisters, I have three goddaughters. It was infuriating. And some people were saying, I believe the women but they got what they asked when they went over there." Daniels also wrote the following comment under the photo:

After the show aired, other Black comedians shared their thoughts on Bill Cosby. Justin Williams wrote me,

Bill Cosby is a trailblazer who opened doors for African-American entertainers and donated millions of dollars to Historically Black Colleges, but he's also an admitted serial predator of women. I think some people have a problem understanding that it's not an either or, Cosby is both. We can celebrate acts of charity and condemn victimizing vulnerable people at the same time. This isn't hard.

Comedian Khalid Rahmaan had a similarly straightforward assessment: "I believe these women. These allegations are not few or isolated. It saddens me that some celebrities in and some folks in the Black community are defending him based on some combination of respect for his legacy, a mistrust of the justice system and a dislike of women." For Rahmaan, "many of the arguments being made about a vast conspiracy or wanting to bring a successful Black man down are eerily similar to what folks were saying about OJ Simpson, who any reasonable person would also conclude was guilty." Rahmaan also said, "It angers and saddens me that our justice system has been so unfair to Black people for so long, that even monsters like Bill Cosby will be defended by default against charges brought by the system." He's able to simultaneously see Cosby as a talent and a rapist: "I still love the Cosby Show and his standup. It was all brilliant, even though it appears that he was a monster the whole time."

Check out the our discussion on The Katie Halper Show on WBAI here or below. And tune into the shoe every Wednesday at 6pm on WBAI, 99.5 FM or WBAI.org. Tonight, we will bring you an interview with Jay Smooth!