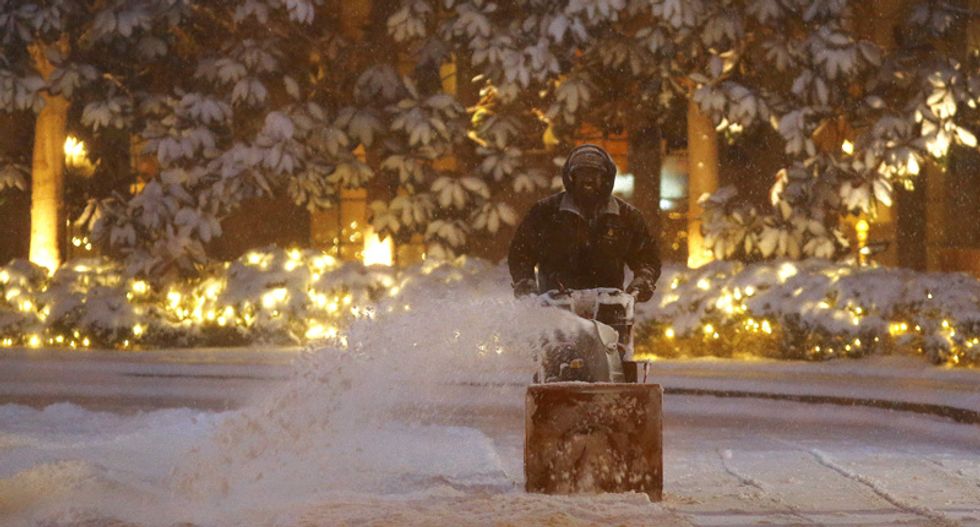 A man cleans the entry way of a building after a winter storm arrived in Washington January 22, 2016. REUTERS/Carlos Barria

More than 85 million people in at least 20 states were covered by a winter weather warning, watch or advisory, the Weather Channel said, and many stores were left with bare shelves as residents stocked up on food, water and wine, preparing to spend the weekend indoors.

At least six people were killed in car crashes due to icy roads in North Carolina, Kentucky and Tennessee.

The governors of several states, including New Jersey, Pennsylvania, Maryland, Virginia, North Carolina and Georgia, as well as the mayor of Washington, declared states of emergency. Officials warned people not to drive.

The Washington and Baltimore metro areas were expected to bear the brunt of the storm. Two to three feet of snow are likely, accompanied by winds of up to 50 miles per hour (80 km per hour), before the storm winds down on Saturday afternoon, according to the National Weather Service (NWS).

Steady snow was falling on southeastern Pennsylvania, including Philadelphia, early on Saturday. The storm is forecast to head north toward New York City later in the day.

The National Weather Service said it was too soon to tell whether the snowfall will break records around Washington D.C. and Baltimore. "Either way, we're looking at a significant event," said NWS meteorologist Frank Pereira.

The full force of the storm could dump enough snow on Washington to eclipse the 17.8 inches (45.2 cm) of a 2010 storm and total snowfall might rival the storm of 1922, when a record 28 inches fell.

The storm developed along the Gulf Coast, dropping snow over Arkansas, Tennessee and Kentucky on Friday. On the East Coast, warm, moist air from the Atlantic Ocean collided with cold air to form the massive winter system, Pereira said.

"This has life-and-death implications and all the residents of the District of Columbia should treat it that way," Washington Mayor Muriel Bowser said.

The storm was forecast to move offshore in southern New England early next week. Philadelphia and New York were expected to get 12-18 inches of snow before the storm abated.

Low-lying areas of New York and New Jersey - some still rebuilding after Superstorm Sandy in 2012 - might see flooding during high tides on Saturday and Sunday, officials said.

More than 7,200 flights were canceled within, into or out of the United States on Friday and Saturday, according to flight tracking website FlightAware.com. Amtrak modified service on train routes along its busy Northeast Corridor.

New Jersey Transit shut all bus, rail and light rail service early on Saturday and said service would be restored as "conditions permit."