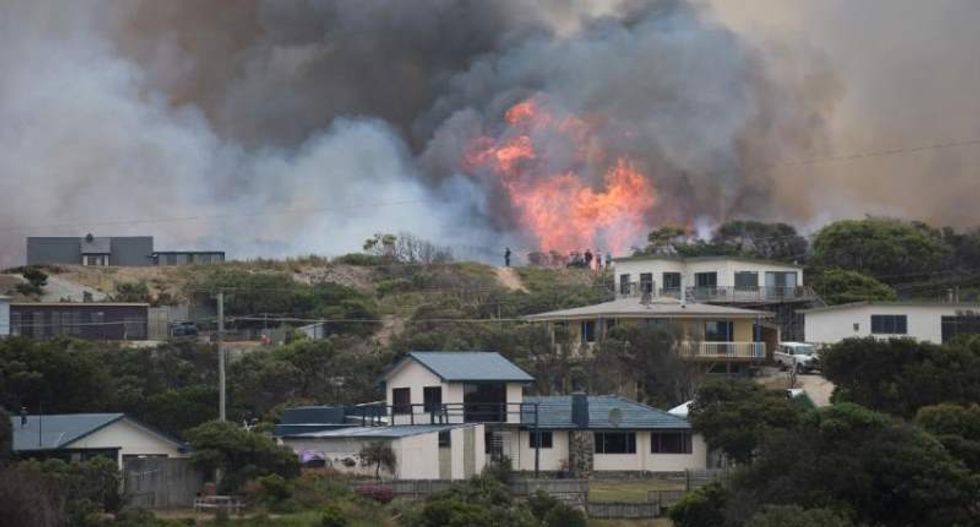 A Tasmania Fire Service image of a bushfire behind Arthur River township in the Australian state of Tasmania, on Jan. 28, 2016. (Agence France-Presse/Warren Frey)

World Heritage-listed forests whose origins pre-date the age of the dinosaurs are being destroyed by raging Australian bushfires, with conservationists increasingly fearful they could be lost forever.

Firefighters in Tasmania -- a state south of the mainland known for its cooler temperatures -- have been battling bushfires for 18 days, with 95,000 hectares (234,750 acres) of land burnt so far, authorities said Friday.

"The fires in western Tasmania are occurring in basically an ecosystem which is a remnant from the geological past, so they are of immense significance scientifically," David Bowman, professor of environmental change biology at the University of Tasmania, told AFP.

"These systems were once more widespread and indeed grew on Antarctica billions of years ago, so they are living fossils... they go back to well before the age of the dinosaurs, they are a tangible connection to Gondwana."

Gondwana was a land mass that included present-day Africa, South America and Australia and formed the southern part of an ancient supercontinent called Pangaea.

One of the last expanses of temperate wilderness in the world, the Tasmanian Wilderness was entered into the World Heritage list for its significant natural and cultural values in 1982 and covers nearly 20 percent of the island, or 1.4 million hectares.

With the Tasmania Fire Service (TFS) battling more than 70 blazes and access to remote areas difficult, a spokesman said the agency was not able to gauge how much forest had been burnt, although most of the fires are in the west and encompass vast swathes of protected land.

Species under threat include the southern beech forests, also known as nothofagus, the pencil pine -- a distant relative of American redwoods -- and the king billy pine, Bowman said.

Some species are only found in Tasmania, leading to concerns that if the ancient, slow-growing trees are obliterated by the blazes, they could take many years to regrow, if at all.

Bowman warned that despite the firefighting efforts, only soaking rain could end the emergency as the soil of western Tasmania was drying and turning into so-called "brown coals" that burn tree roots.

Light rain now falling on the island has failed to douse the flames, with lightning strikes sparking more blazes, the TFS told the Australian Broadcasting Corporation.

Lightning strikes were "insignificant sources of ignition" just a few decades ago, Bowman said. But three years ago, a major bushfire that destroyed more than 100 homes was also in part sparked by lightning.

Bowman said that from his assessment, the recent blazes in Tasmania, along with a trend of rising temperatures in Australia and across the world, reflected an increase in extreme fire situations that pointed to climate change.

But all may not be lost.

"In these sort of circumstances, the seed bank's take is that we may lose the ecology but we don't necessarily have to lose the species so we can preserve them."

But he warned that while it might be possible to overcome sporadic events, long-term environmental changes -- such as those that appeared to be caused by climate change -- were harder to protect against.

"For really protracted, long-term changes, there's nothing we can do," Wood told AFP, adding that even without the fires, warming temperatures were changing the landscape, including how plants and insects interact.

"We know that with climate change, even if we curb or stop CO2 emissions, the actual climate change implications are still going to wear on."