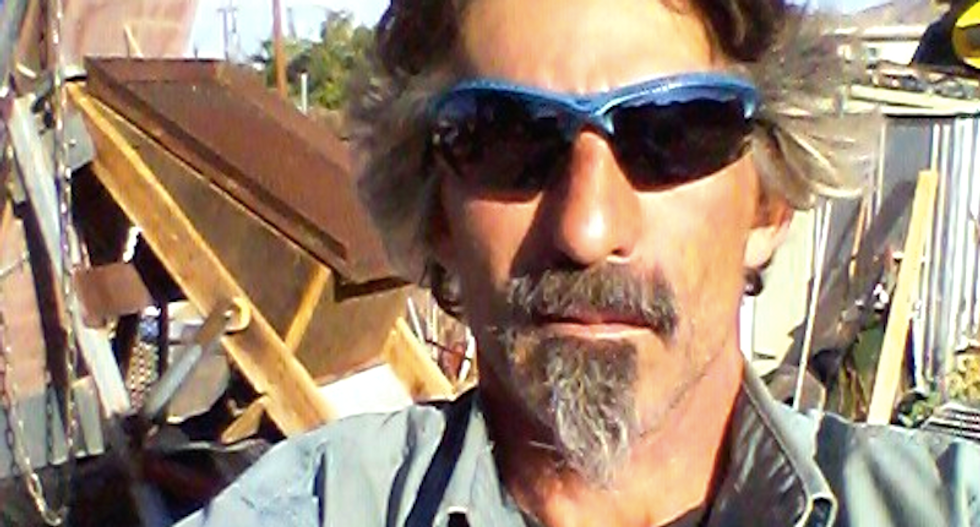 A California man who expressed apparent support for the Bundy militants occupying an Oregon nature preserve was arrested Saturday on a variety of felony charges.

Deputies executed a search warrant Saturday at Sloan's Johannesburg home, where investigators said they found improvised and commercial explosives and "booby traps" throughout the residence.

Sloan apparently called the Daily Independent Thursday to complain about the southern California city's methamphetamine problem and claim that he had asked federal authorities to investigate.

Sloan made several dozen baffling -- and almost always misspelled -- comments on his own Facebook page Saturday, before investigators executed the search warrant.

"Bundy Ranch? We the People Lost Jorden Hot Spring. Evil Goverment," he posted. "Found More Evil. B.L.M. Run People Out of Back Country Area's forced to City & Homeless??? I Know of Many, Thinking Back. A Lot of Vet's to. & Foristry Would Not Renew Jordan Hot Spring Area. & Distroy the Area it Was Heaven. Many People Lots A Very Nice Vacation Now Gone. Evil Goverment (sic)."

Sloan does not appear to have any connection to the militants who have seized the Malheur National Wildlife Preserve, but his social media posts suggest he shares an interest in Bible-based "natural law" theories that circulate among so-called "sovereign citizens."

"GOD Gave You EveryThing You Need, Is On the Planet GOD Made Many Clues In the Bible," he posted shortly before his arrest. "Find What God Left For You. Treasure Hunting The Bible. Gold Every Where. Miss Guided. Devil Marijuana.Beleve in Your Self & What GOD Gave Us. Free Medical, Free Energy. Very Evil Goverment (sic)."

Sloan, who described himself as a "gold miner," frequently targeted the pope and the Catholic Church -- who he compared to Donald Trump -- with criticism, and he shared posts about Vladimir Putin, homeopathic remedies and firearms.

"GOD Has All Ready Given You Everything You Need. Rome Want Blind Followers Like TRUMP," he posted Saturday. "Get a Book & Find What God Made for You To Find your Own Cure. Happy Treasure Hunting. Save Your Own Life. I'm On Vacation."

William Celli, of Richmond, was arrested Dec. 20 in connection with a plot to bomb Muslim worshipers at a mosque near his home.

The 51-year-old Celli expressed admiration for Trump, the Republican presidential frontrunner, among his complaints about immigrants and various political figures.