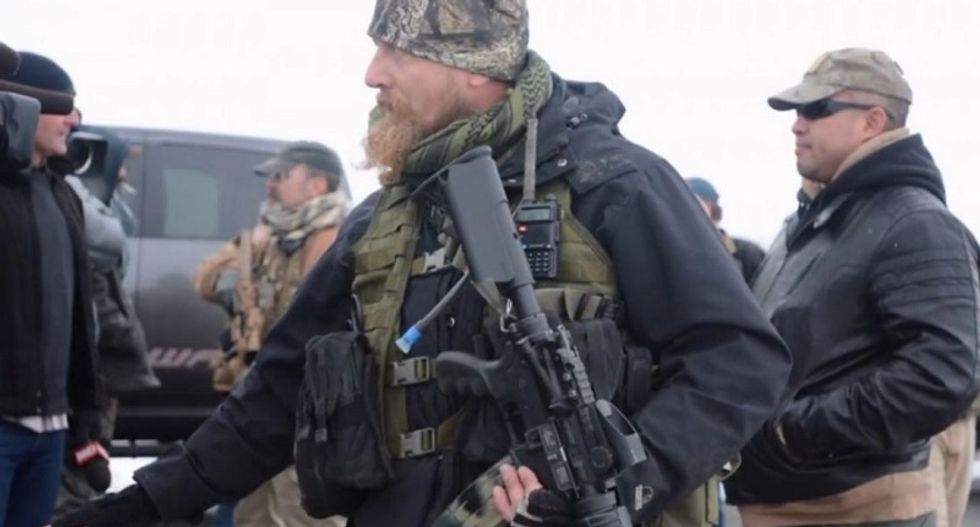 There may be more drama afoot at the Bundy militia standoff at the Malheur National Wildlife Refuge.

In a moment of irony, a new group of armed miltiamen has arrived at the standoff in Harney County, Oregon, and the ones that have been there since last Saturday say their presence is unwanted.

The Oregonian reports that the Pacific Patriot Network has sent armed "security" -- some of whom are carrying semi-automatic rifles -- to the standoff on Saturday. But an attorney mediating the dispute between Ammon Bundy and federal officials said Bundy wants them to leave.

"We don't need that. We don't want it and we're asking you to leave," Todd MacFarlane, an attorney mediating the dispute on behalf of the Bundys, told reporters Saturday.

In a press conference Saturday morning, a representative from the Bundy group said they are looking to de-escalate the situation.

Locals in the area of the standoff have, in turn, condemned the Bundy takeover. Residents have expressed fear at the presence of armed militia and asked the outsiders to leave.

MacFarlane said members of the original occupation are "alarmed" by the new arrivals.

"This was the last thing in the world they wanted to see happen," MacFarlane told reporters. He stressed that Bundy didn't request that the group come, and stressed their presence is unwanted.

Brandon Curtiss, leader of the Pacific Patriot Network, said the group will not be staying inside the refuge with the Bundy group, but will be "patrolling the perimeter," according to the Oregonian.

The occupation of the bird sanctuary started last week, when Ammon Bundy, son of rancher Cliven Bundy, led the group there after a protest over the imprisonment of ranchers Dwight and Steven Hammond. The men have been sentenced to federal prison terms for setting fires on federal property. The Bundy group believes the ranchers' rights are being violated and wants locals to take control over the federal land they are occupying.

Cliven Bundy's ranch in Nevada was the focus of a standoff with federal officers last year, after a disagreement over cattle grazing.

Watch the groups discussing the new arrivals, via the Oregonian, here: